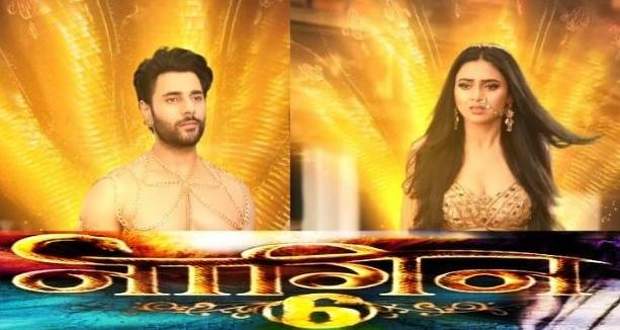 Mahek follows the duo as Rishabh watches all three of them leave in deafening silence.

Inside the temple, Mahek guides Pratha about the ‘pheras’ and tells her that all the Seers and Rishis have gathered for Shesh Naag and Shesh Naagin’s marriage which happens once in a thousand years.

Pratha imagines Rishabh walking into the temple and coddling her face.

Mahek brings Pratha out of her blankness as a tear drops down Pratha’s face.

Pratha’s tear droplets turn into the fire as they fall on the ground where the mandap has been set up.

Mahek gets shocked as Pratha and Yash get ready to take the pheras.

However, Yash stops Mahek and asks Pratha what is the matter.

Pratha’s face warps in confusion as she looks at the Shesh Naag.

Yash declares that Pratha loves Rishabh and has taken him as a husband as Sati took Shiva as her husband for eternity.

Yash refuses to marry Pratha as Pratha’s heart already belongs and has been entwined with Rishabh.

Mahek worries about breaking the centuries-old practice ritual and asks Shesh Naag for a solution.

Yash announces that Pratha can be freed from marrying him if he takes the vow of Brahmacharya.

With a strong utterance of Lord Shiva’s name, Shesh Naag gets initiated on the path of Brahmacharya.

Both Mahek and Pratha bow down to Shesh Naag along with all the miraculous serpents gathered at their wedding venue.

Yash encourages Pratha to go to Rishabh and be with him as he is her true love.

On the other hand, Urvashi tells Seema that it is the perfect occasion for Reem to get married to Rishabh.

Radha agrees with Urvashi and so does Reem.

Rishabh feels numb for a while as Reem tells Seema that she is ready to marry Rishabh and forget what all had happened.

Seema looks at Rishabh for his consent.

Rishabh tells Seema he will do as she says as he has no will at the moment.

Meanwhile, Pratha and Mahek come in running to Rishabh’s house.

Mahek urges Pratha to run faster and tells her sister proudly that her dreams have come true.

However, Mahek’s statement stands reversed when Pratha’s eyes fall on Rishabh and Reem getting married.

The globe that Pratha bought with Rishabh falls out of her hand in shock and Seema takes notice of Pratha’s stature.

Pratha’s eyes are full of tears when Seema approaches her.

Pratha is unable to control her tears.

Pratha apologizes to Seema for leaving Rishabh as she loves him.

Seema consoles Pratha and sees her off as Pratha wants to leave and be alone for a few days.

A 'Farishta' comes to Pratha's rescue

Traveling in a bus along with a broken heart, Pratha comes across a stranger who introduces himself as a ‘farishta’ or a miracle.

Pratha does not pay attention to him initially but as he begins to speak, Pratha listens to him.

Farishta talks in a fairy tallish language and asks Pratha whether she is a Shiva bhakta or not.

Farishta reminds Pratha that if she is a Shiva bhakta, she should know that Shiva does not let down his devotees ever.

The farishta later hands down an old, vintage book to Pratha and disappears.

Pratha realizes that it is a book written on the subject of Shesh Naag.

On the other hand, it is revealed that Yash was Lord Shiva personified himself to remind Pratha of her ongoing mission.

Lord Shiva smiles as he watches Pratha go through the book.

Through reading the book, Pratha realizes that her journey has not been finished and she is very near to meeting the seventh Asura.

Pratha also comes to realize that Rishabh is in extreme danger.

After receiving this sensitive information, Pratha tells the bus driver to stop and heads back to Rishabh’s house as fast as possible.

Rishabh did not marry Reem

When Pratha announces and tells Seema she wants to talk to Rishabh alone, Seema is shocked.

Pratha feels heartbroken again when Seema informs Pratha that Reem and Rishabh’s marriage has been done.

A minute later, Rishabh comes into the house, with Reem’s hand in his.

All the family members walk toward the newlywed couple but Pratha does not turn back.

However, another surprise awaits Seema. Rishabh announces that he has not married Reem.

Instead, Ritesh has married Reem.

Rishabh tells how he swapped places with Ritesh when the light went off during the wedding preparation.

Reem agrees to marry Ritesh as she also wishes to move on in her life.

Rishabh tells both Reem and Ritesh that his love for Pratha has grown stronger, not weaker and he cannot betray Reem like that.

Rishabh’s eye then falls on Pratha and he cannot believe it.

He walks toward her and smiles hugely.

Rishabh asks Pratha whether she married Yash or not.

Pratha tells Rishabh that she wasn’t able to marry Yash because she loves Rishabh.

With both their confessions out, Rishabh beckons Pratha to follow him into their room.

Pratha and Rishabh get romantic

Pratha’s dream of marrying the man she loves has come true and Rishabh is proud to be her husband.

Both their breaths slow down as Rishabh leans in to kiss Pratha.

Pratha forwards her lips letting them loose and closes her eyes as Rishabh is about to kiss her soft lips.

However, unable to control her butterflies, she playfully pushes Rishabh away and runs.

Later, when Pratha emerges out of the bathroom, she notices the bed being decorated with rose petals.

Pratha is all smiles and nerves when Rishabh ducks down on his knees with the globe to profess his love for Pratha.

Rishabh says the famous lines of Om Shanti Om while the "Haan Haseen Ban Gaye" song plays in the background.

She laughs shyly as Rishabh stands up.

Rishabh takes Pratha’s hand in his and dances along with his wife.

Rishabh’s hand wraps around Pratha’s waist and his face speaks volumes about the love he has for his doe-eyed wife; Pratha.

Hands wrapped around while faces touching each other, even the air can not pass through PraRish.

Rishabh makes Pratha wear Mangalsutra and puts vermilion in her hairline while Pratha glares at him and expresses her love for him through her eyes.

Their romance is cut short when a red arrow hits Rishabh’s neck in their room and he collapses down.

Pratha suddenly realizes that Maha Asura is after Rishabh and is in the Gujral house only.

No longer inhibited by her beating heart for Rishabh, Pratha resolves to kill Maha Asura before it tries to kill Rishabh.

As per the latest promo of Naagin Season 6 on 24th April 2022, Pratha will recognize Yash as the Sarvashreshth Naag.

Over time, Pratha has grown feelings of love for Rishabh.

However, with Yash reminding Pratha of her responsibility of being a Shesh Naagin, Pratha has no choice left.

According to the latest twist of Naagin 6 spoiler, Pratha will have to marry Yash to find out the remaining Asuras.

So far in Naagin 6 latest story, it was Mahek and Pratha working together as a team to kill the Asuras.

Now, with Yash emerging as Shesh Naag, Pratha will have to follow his guidance too as their wedlock has been sanctioned by Nag Lok for eternity.

Can Pratha move on from Rishabh and fulfill her role of Shesh Naagin successfully?

Will Yash prove to be a loving husband to Pratha or will their wedding be a disaster for Pratha’s deep emotions?

Let us see what happens in the future story of Naagin 6 as Pratha gets tested in novel ways by Lord Shiva.