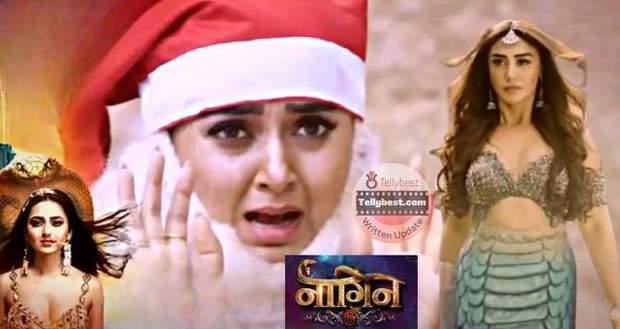 Today's Naagin 6 24th December 2022 episode starts with Preeti's siblings waking up with sad faces on the day of Christmas while Gautam tries to cheer all of them up.

The little ones complain to Preeti that it seems like Santa only fulfills the wishes of richer kids since if he was there for them, they wouldn't be sitting outside in the cold when their house is in front of them.

Preeti tells every one of them that Raghuveer will do something and they will go inside the house but later, she feels bad since her little ones are feeling this way about Christmas.

On her way, Preeti finds an old man dressed as Santa Claus but in a weak condition.

He informs Preeti that he is going to Unnati grounds to cheer up the orphaned kids every year but by this year's end, he is feeling ill.

Preeti volunteers to go to Unnati grounds, hoping she can earn something to make her siblings happy too.

However, on Unnati grounds, Preeti bumps into a lady who first threatens her.

The lady then instigates all the kids to throw balls against Preeti who is dressed as Santa Claus and humiliates Preeti by asking her to dance.

Meanwhile, Sonya who is Raghuveer's sister arrives and gets greeted by him warmly.

However, the older Ahlawat brother informs Soniya that their Raghu has been in awe of lady love.

Mehak doesn't like Soniya staying for too long at Gujral Mansion and casually states that one day, she has to go and get married.

Upon hearing this, Soniya's face falls down.

On the other hand, Mehek sends her army of evil Naag and Naagins to find Prarthana, the Maha Shesh Naagin in Unnati Grounds.

Meanwhile, Prarthana sits alone under a tree and cries while Raghuveer sees her there as he has an important meeting.

Upon seeing him, Prarthana questions Raghu why he is wearing such official clothes and he lies that he has come here for work to earn some money, just like Preeti.

Seeing her shed tears, Raghuveer tries to instill some positivity in Preeti and dresses up as Santa himself, and distributes gifts with her among the kids.

Chak Dhoom Dhoom Song plays in the background as Raghuveer's vibrant hearts get filled with Preeti's beauty and innocence he has already fallen for.

Just then, the snakes sent by Meheck come there and Raghu hurries to take all the kids to a safer place.

Prarthana who is inside Preeti in essence comes alive when she sees the evil snakes trouble the kids and beats them up.

Meheck arrives there and girdles her huge tail around Prarthana, trapping her and then locking her in a junk room at Gujral Mansion.

Little does Meheck knows that the Naagin she thinks is Prarthana is another Naagin sent by King Takshaka to safeguard Preeti until her memories come back.

On the other hand, Sonya who is Raghu's sister meets Gautam whom she loves so much, and vice versa.

Later, Meheck brings Seema smugly to the room where she has tied Prarthana to a chair.

However, Seema calls Meheck a hyper Neeli (blue) Naagin who chants Prarthana all day but brought another Naagin in place of her.

Meheck feels frustrated while Seema urges her to instead concentrate on Sonya's wedding in Thakral House which has a jewelry business too.

Meanwhile, Preeti comes awake after Raghu wakes her up.

She hugs him tightly and in sheer panic, utters that she saw several snakes.

Later, she goes and cheers her siblings up with the gifts she bought for Christmas and Gautam asks her to be positive for a job.

At night, after Sonya's engagement gets fixed with Arjun, son of Smriti Thakral who Meheck wants to join Vinay's jewelry business, Gautam goes to meet her there secretly and gets sad to see Sonya ready to marry Arjun without her willingness.

He calls Preeti after drinking alcohol, saying he wants to die.

On the other hand, Soniya gets engaged to Arjun and Meheck suggests Raghuveer get engaged to Ananya (Smriti's daughter, Arjun's sister) the next day.

She also hypnotizes Vinay (Raghu's older brother) and when he asks Raghu to agree, Raghu agrees without hesitancy.

Preeti arrives at a construction site after tracking Gautam's location and sees he is standing at the edge of the top, ready to commit suicide.

Preeti screams when he jumps off but Maha Shesh Naagin inside of her comes alive and saves Gautam with her tail.

In the upcoming story of Naagin 6 on 24th December 2022, Preeti will go dressed up as Santa Claus upon Raghubir's suggestion to a park nearby to cheer up the kids.

So far in the story of Naagin 6, Raghuvir finds himself falling in love with Preeti but hasn't confessed it yet.

Meanwhile, Mehek is sure that Maha Shesh Naagin AKA Prarthana is back!

According to the latest spoiler of Naagin 6, Mehak will find Prarthana at the Christmas park and attack her with the help of the miraculous anklets.

Prarthana will get hurt and get knocked down unconscious, however, the essence of Maha Sarvasrestha Naagin will sprout through and take her real form.

Prarthana's eyes will turn golden as Preeti goes to sleep and Maha Shesh Naagin inside of her gets ready to tackle Mehek.

As per the upcoming twist of Naagin 6, Mehek will trap Prarthana and taunt her to prove her worth if she is really a Shesh Naagin.

Can Prarthana break out of the lock Mehek has trapped her inside?

Let us see how this first confrontation goes between Mausi and her niece in the next episode of Naagin 6.

© Copyright tellybest.com, 2022, 2023. All Rights Reserved. Unauthorized use and/or duplication of any material from tellybest.com without written permission is strictly prohibited.
Cached Saved on: Wednesday 25th of January 2023 05:25:25 PMCached Disp on: Sunday 5th of February 2023 04:29:25 AM