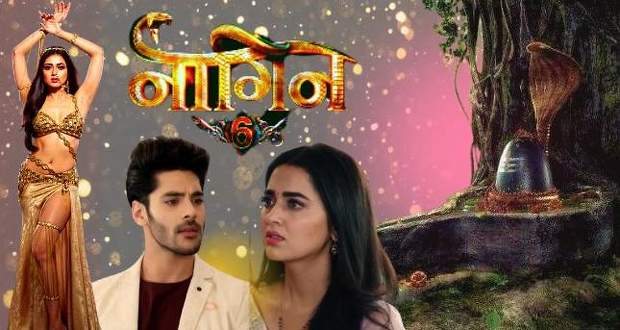 Today's Naagin 6 24th July 2022 episode starts with Rajesh Pratap Singh offering a fake marriage proposal to Pratha so he can get back his dead wife’s ancestral property.

Rajesh and Kiara tell the Gujral family members that they will be marrying today, instead after two months.

Meanwhile, Urvashi and Reem go to Shakti’s room to serve him food for two days since they will be attending Kiara and Rajesh’s marriage.

Reem does not leave with Urvashi but later discovers that Shakti is actually lusting after Kiara whose name he does not know and thinks it is Deepika.

The whole Gujral family travel to South Delhi since Rajesh and Kiara’s wedding will be taking place at his mansion.

However, Reem stays back and unlocks Shakti’s room.

Reem is jealous of the fact that Rishabh is swooning over Kiara since she thought she could woo Rishabh after Pratha’s death.

Reem informs a growling Shakti that if he loves Deepika (Kiara), he has to come and stop her wedding with Rajesh in South Delhi.

On the other hand, Mehek feels overwhelmed at the sheer size of Rajesh Pratap’s mansion and tells Urvashi to chill for two days.

Urvashi feels irritated at Mehek’s stupidity and says she cannot chill because Shakti would be awaiting Mehek to fulfill her fake promise of handing Kiara to him.

Meanwhile, Rishabh feels pained in his heart when he sees Kiara hold Rajesh and imagines being with Pratha who was his everything.

Rishabh imagines Pratha smiling at him, wearing a floral saree and asking him how good she looks.

On the other hand, Kiara gets ready to get her hands painted with Mehendi.

Pratha gets Rishabh's name written on her hand

The Mehendi designer accidentally writes Rishabh’s name on Pratha’s hand instead of Rajesh.

Hurriedly, Pratha removes Rishabh’s name by washing her hand and asks the Mehendi designer to make a design over Rishabh’s name and write Rajesh’s name instead.

On the other hand, Shakti escapes his room and goes to a store to buy a designer Sherwani for him.

After purchasing the Sherwani, he asks a taxi driver to drive him to South Delhi to attend Deepika Padukone’s wedding.

Shakti gets angry and drives the taxi himself while a few other people on the road record his outburst and post his video on social media.

On the other hand, Rehan goes to Vihaan’s room and gets scared when Vihaan says he has died.

However, it is not Vihaan but Gauri, Pratha’s Naagin friend, in disguise.

Scared, Rehan leaves his room and confesses to Rishabh that it was not Pratha who killed Samaira but himself.

At the same time, Inspector Vijay sees the viral video of Shakti assaulting a taxi driver and goes to South Delhi to interrogate Mehek about it.

Rishabh gets to know Mehek's truth

Mehek asks Inspector Vijay to not create drama since it is Kiara and Rajesh’s wedding.

However, Vijay says how can Mehek talk about marriage and love when she never loved anyone and even killed her own sister.

Mehek admits this and says Pratha deserved all the blame. Rishabh hears Mehek and Inspector Vijay’s conversation and feels the ground under him shake.

On the other hand, Gauri informs Pratha about Rehan’s confession to Rishabh and says their plan is going full force.

Pratha smiles and says they cannot do a single mistake since she will be killing Rishabh today.

After Inspector Vijay leaves South Delhi upon Jwala’s request, Rishabh asks Mehek what she was talking about to him.

Mehek gets nervous and says he just came by to say hello.

Rishabh feels extremely guilty inside since he let a love like Pratha go so easily from his life.

In the upcoming story of Naagin 6 on 24th July 2022, Pratha will be finally killing Rishabh as she still believes him to be the killer of her unborn baby.

She does not know the truth about Shakti and blames Rishabh for Shakti's wrong actions.

So far in the story of Nagin 6, Rajesh Pratap Singh is telling Pratha, again and again, to finish Rishabh once and for all.

However, she can't seem to kill Rishabh since she still harbors romantic feelings for him.

As per the latest spoiler of Naagin 6, Shakti will finally escape this storeroom and will try to molest Pratha.

This way, Pratha will understand Rishabh and Shakti's past but it will be too late for her to do anything.

Rishabh will also die due to a fire accident as per the upcoming twists of Naagin 6.

Let us what happens in this thrilling episode of Naagin 6 with Rishabh getting into danger and Pratha encountering Shakti in the future episodes of Nagin 6.