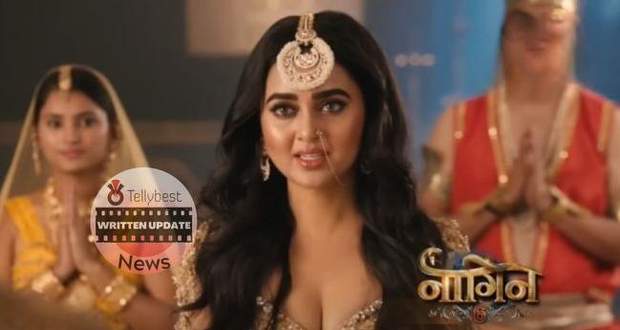 However, Prarthana falls on the stairs while dancing and a loud cry escapes her mouth, calling for her "Maa" (mother).

At the same time, at Gujral’s mansion, Pratha also falls on the stairs and a blue ray comes out of her body.

As soon as the blue ray comes out of Pratha’s body, it starts flying.

Meanwhile, Chanda Maa finds Pratha lying on the floor and helps her to get up.

On the other hand, at Naag Mahal, Prarthana crawls towards the milk to drink it while a big thunderstorm is going around the world.

At the same time, the blue ray comes out of nowhere and gets absorbed in Parthana’s body.

In the meantime, in Gujral's mansion, Pratha enters Anmol’s room and gets relieved to see Anmol’s body not turning yellow.

She even announces in an aggressive voice that the Saperas will never be able to control her.

The Saperas try to beat Prarthana with their Nag Bin but Parthana beats them one by one.

After the fight ends, Prarthana falls unconscious on the floor.

Later, Prarthana comes back to her senses and gets shocked to see the Saperas lying around on the floor.

She even forgets about her Shesh Nagin transformation and decides to go back home.

Elsewhere, in the Gujral mansion, Pratha gets a dream about her Nani (maternal grandmother) Nageshwari, who informs her that a big thing has already happened.

The dream confuses Pratha and she is not sure why Nageshwari suddenly said that to her.

The next morning, the professor gets shocked to see Parthana not stutter as she talks to him.

When he mentions this to Prarthana, she starts acting to avoid questions.

Later in her room, Prathana notices that she is not able to see anything with glasses much to her shock.

Without thinking much, Prarthana decides to buy the same glasses with less power.

Meanwhile in Gujral's mansion, upset Anmol decides to go to New York and tells her best friends about her decision.

Hearing this, the best friends get excited and urges her to plan a trip but she denies it.

On the other hand, angry Rishabh is cleaning his old gun so that he can shoot Rudra for breaking his daughter’s heart.

At the same time, Pratha enters the room and calms Rishabh down by reminding him that Rudra has done nothing wrong.

Later when Pratha and Rishabh enter Anmol’s room to remind her that she needs to go to the fundraising event with them.

At first, Anmol declines but when her best friend mentions Rudra will be there too, she agrees to come.

Meanwhile, when Prarthana arrives in Rudra’s room and informs him about Saperas trying to kidnap her.

Hearing this, Rudra gets angry and scolds her for being scared as the journalism job is not easy, and also says if Prarthana wants she can leave the job, much to Prarthana’s shock.

As soon as Prarthana comes out of the room, she collides with Rudra who asks her if she is okay.

Though Prarthana nods yet she feels confused about this.

Further, Rudra informs Prarthana that she needs to go to the fundraising event with him.

Prarthana again goes back to check the footage but before she can realize anything, Rudra calls for Prarthana.

Prarthana and Anmol to come face to face

In the evening, Prarthana arrives at the fundraising event and Anmol notices her.

Seeing Prarthana, Anmol feels stunned as she looks like an exact copy of Pratha.

Anmol even urges Prarthana, asking if she can hug the latter to which Prarthana agrees.

While Prarthana and Anmol are hugging, Patali and Suhasini notice them.

Suhasini then starts laughing like evil because Anmol and Prarthana do not know that they are sisters.

Meanwhile, Rudra approaches Anmol to beg her forgiveness about last night but Anmol avoids him by announcing that she is the showstopper tonight so she does not have time for this.

Rudra agrees and walks away. Later, the minister arrives on the stage to inaugurate the ceremony while Suhasini and Patali smirk.

Suhasini even says that no one knows what will happen here tonight.

On the other hand, Rudra orders his team to stay alert as he is a sure terrorist attack will happen during the fundraising event.

In the upcoming story of Naagin 6 on 24-09-2022, Prathna will become the next Sarvasrestha Naagin after Pratha who hasn't arrived yet in the Naag Mahal under the powerful presence of King Takshaka.

So far in the story of Naagin 6, Prathna realizes she wasn't mad or stupid to see coincidences regarding moonlight, shedding of the skin, and kicking the mongoose hard after she turns into Sarvasrestha Naagin.

According to the latest spoiler of Naagin 6, Pratha will run to witness the Navratri Maha Puja in the Naag Mahal but will get shocked to see the next Shesh Naagin standing in front of each other.

Pratha thinks that Anmol is back home. However, what she doesn't know is that she has another daughter named Prathna who asks King Takshaka about the previous Shesh Naagin.

How will Pratha react when she sees her doppelganger standing alive in front of her?

Let us see how Pratha and Prathna's encounter occurs in the future episodes of Nagin 6.

© Copyright tellybest.com, 2022, 2023. All Rights Reserved. Unauthorized use and/or duplication of any material from tellybest.com without written permission is strictly prohibited.
Cached Saved on: Monday 21st of November 2022 08:01:56 AMCached Disp on: Thursday 1st of December 2022 02:16:51 AM