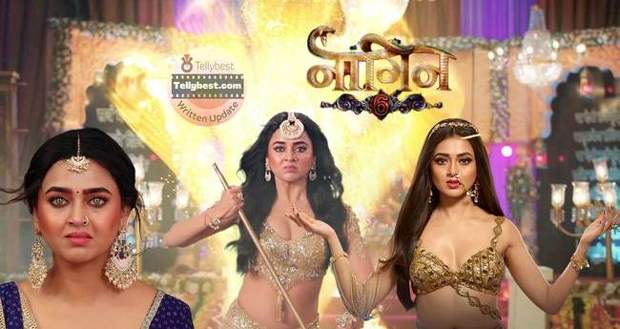 Today's Naagin 6 25th December 2022 episode starts with a drunk Gautam screeching that he loves Sonya and preparing to commit suicide.

However, the Maha Shesh Naagin inside Preeti ignites and she saves him by using her grand tail.

After Gautam is saved, Preeti forgets everything and brings her back home.

Meanwhile, Raghuveer brings some gifts and cakes for Preeti's siblings to taste as he sees Preeti fold their clothes neatly along the pretty twilight mountain lighting.

He decides to tell Preeti the truth about him being the Ahlawat jewelry owner today.

Raghuveer Romances Preeti In The Rain

Raghuveer goes behind Preeti and almost kisses her cheek but his hush-hush whisper scares Preeti away along with rain which starts to pour down.

Afterward, Dhadak title track plays as Raghuveer romances Preeti in the old style but whilst dancing he bangs his head against one of the pillars accidentally.

He jerks awake and realizes that it was all just a dream but a beautiful one.

He goes near Preeti who looks a little lost and she reveals to him that Gautam fell in love with a girl named Sonya but since she belongs to a rich household, Gautam won't be able to marry her.

Preeti says that she hates the rich and cries, holding onto Raghu's shoulders, saying it is the same rich who tried to demolish the Ashram without thinking about her or her foster siblings.

Internally, Raghuveer then says he won't tell Preeti the truth now, otherwise, he won't be able to handle the hatred she has towards the rich.

Whilst meeting the kids, they all ask Raghu why he has brought so many sweets for them and he reveals that his sister is getting married.

Teasingly, the kids utter that their Preeti Didi can marry Raghu.

The next day, Preeti decides to talk to Sonya's family herself, and ask her hand to marry Gautam.

Meanwhile, in Ahlawat Mansion, Sonya's Haldi begins but Raghuveer notices that she is sad.

Meheck covers it up, stating she is feeling like this since her marriage will happen in the evening but Raghu doesn't get fully convinced.

Vinay then asks Meheck to bring ritual plates from upstairs.

On the other hand, Preeti gets surprised when Sonya's address turns out to be Ahlawat's and feels scared to talk to the owner.

For Gautam's sake, she doesn't back off and soon, sees Raghuveer and thinks his boss must be rude to ask him to work for his sister's wedding truth.

The truth dawns on Preeti when she sees Raghuveer apply Haldi to Sonya himself and she realizes that Raghuveer isn't a servant of Ahlawat but his brother.

She cries and begins to leave but Raghuveer sees her and tries to stop her.

However, Preeti throws harsh words at him, saying she is stupid to believe all his lies since he is also the same rich.

Raghuveer gets exasperated by the misunderstanding between him & Preeti and says he was too scared to tell her his truth, otherwise she would have hated him.

Meanwhile, Meheck is drinking Vodka, grumbling that she is tired to be everyone's "bhabhi" for help but Vinay's voice snaps her out of her hangover.

She hides the bottle behind the curtains and punishes Vinay for ordering her around by hypnotizing him.

After he is hypnotized, she asks Vinay to slap himself loudly and he does.

Preeti storms off and leaves while crying and locks herself in her room upon reaching the Ashram.

Meanwhile, Raghuveer punches the wall in his room, blaming himself for ruining whatever he had built with Preeti.

At Ashram, Gautam feels guilty, thinking it is because of him that Preeti is feeling so tense.

Raghuveer stares at Preeti's photograph that he took during the bridal photoshoot and gets an idea.

He calls her and asks Preeti to give him one more chance, saying he will ask Sonya who he truly loves and if she loves Gautam, he will get her married to him only.

Sonya through her tears, tells Raghuveer that she loves him and Raghu announces to Meheck and Vinay that he will not compromise on Sonya's happiness.

Meheck hypnotises Vinay to stop Raghu but Raghu is stubborn and goes to a temple where Preeti is waiting for him to come with Sonya.

Raghuveer apologizes and hands Sonya to Gautam to get married in the temple right away while Meheck arrives there in her snake form, wanting to punish Raghu for the loss he made her incur.

Preeti grabs Meheck (blue snake) in her hand while everyone else tries to shake Preeti off.

Preeti comes out of her reverie and drops the snake immediately.

Meheck gets back in her human form and tries to see the face of the girl standing behind Raghu.

When she sees her side profile, Meheck cannot believe it is Prathna and goes there to say she wants Sonya and Gautam to get married at Ahlawat Mansion.

After hearing Raghu call Prathna, Preeti, Meheck gets confused and decides to keep this girl near her so she knows for sure whether she is Prathna or pretending to be Preeti.

In the upcoming story of Naagin 6 on 25th December 2022, Prarthana will burn alive Meheck in a temple after getting her memories back!

So far in the story of Naagin 6, an army of snakes sent by Meheck starts to attack a group of kids where Prarthana is.

The Maha Shesh Naagin inside of her comes awake and she safeguards the kids.

As per the latest spoiler of Naagin 6, Meheck makes Raghuveer get engaged to a random girl.

However, Raghuveer has already fallen in love with Preeti (Prarthana) and is spotted with her by Meheck in a temple.

According to the upcoming twist of Naagin 6, Meheck will be shocked to see Prathna face-to-face while Prathna will take her Maha Shesh Naagin form, and burn Mehek alive by releasing fire through her mouth.

Let us see how Meheck's chapter closes and Prarthana's new chapter with Raghuveer begins in the future episodes of Naagin 6.

© Copyright tellybest.com, 2022, 2023. All Rights Reserved. Unauthorized use and/or duplication of any material from tellybest.com without written permission is strictly prohibited.
Cached Saved on: Wednesday 25th of January 2023 02:01:56 PMCached Disp on: Tuesday 31st of January 2023 06:20:41 PM