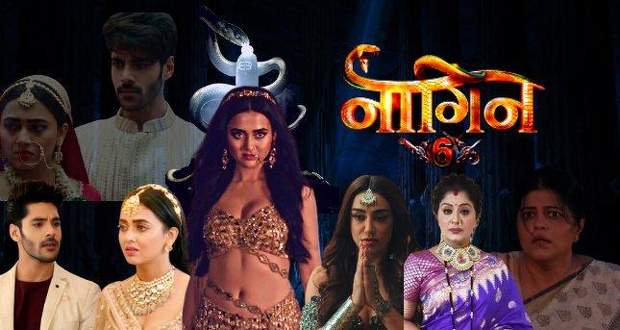 There will be no Naagin telecast today. On 25th June 2022, IIFA Awards will be telecasted on Colors TV.

Check the winners of the IIFA Awards 2022 here

Here is the so-far story of Naagin season 6:

The tale of Naagin 6 has seen a lot of ups and downs since its inception.

The love story of #PraRish started with enmity and suspicion that led to Rishabh marrying Pratha.

In the beginning, Pratha had no idea she was destined to be the Shesh Naagin.

The viewers saw Professor invoking Mehek who is Pratha’s sister and the one who was trained to be the Sarvashreshth Naagin.

However, one fateful night changed everything and Pratha was chosen to be the Shesh Naagin.

At the same time, Rishabh married Pratha because he thought her to be anti-national.

Mehek and Pratha worked together under the guidance of the Professor to find out all the Asuras who were helping Chingistan spread the poison across Bharat.

In her journey to slay all of Bharat’s enemies, Pratha killed many people that including a red Naagin named Shangrila who was artificially built in Chingistan’s lab.

A momentous event in Naagin 6 happened when Pratha drank all the poison from the waters of Yamuna River to save Bharat’s netizens.

At the same time fulfilling her role as Shesh Naagin sincerely, Pratha also found herself falling in love with Rishabh slowly.

However, whenever Rishabh wanted to confess his feelings, Pratha turned into a joke.

Over time, the entry of Seema Gujral as Maha Asura in Naagin 6 came as a big surprise for Naagin 6 fans.

Pratha fought with her bravely but Seema had a lot of surprises up her sleeve.

The mystery of Amrit Kalash, Pratha’s maternal ancestry, and Rishabh’s past opened up.

Pratha discovered that Seema was not the real mother of Rishabh and it was Chanda who was separated from Rishabh when he was born.

Justice was soon served by Pratha in her role as Shesh Naagin with Seema going into a coma.

Meanwhile, Rehan who was the abusive husband of Samaira started to hate Pratha and kick her out of the house.

A significant chapter entered Pratha’s life when she was willing to give up her Shesh Naagin powers to lead a normal human life with Rishabh.

Mehek was against Pratha’s decision but Pratha learned her lesson the hard way when Mehek betrayed Pratha.

Pratha had to go to jail while being pregnant and no one to help her, even Rishabh.

Rishabh married Mehek behind Pratha’s back and Pratha had just one reason to live; her baby.

Soon enough, this reason to live was also taken away from Pratha and she was sentenced to death.

However, miraculously, Pratha was saved by her jail inmates and woke up after a year.

Mehek seized the title of Shesh Naagin, believing Pratha to be dead but Yeti helped Pratha regain back her Shesh Naagin powers.

Pratha has just one motive in her mind now, that is, to kill all the people who killed her baby.

Let us see how this chapter of Pratha’s life unfolds as this time, she is a proud Shesh Naagin who knows her worth.

© Copyright tellybest.com, 2022, 2023. All Rights Reserved. Unauthorized use and/or duplication of any material from tellybest.com without written permission is strictly prohibited.
Cached Saved on: Wednesday 25th of January 2023 01:56:34 PMCached Disp on: Thursday 9th of February 2023 08:33:51 AM