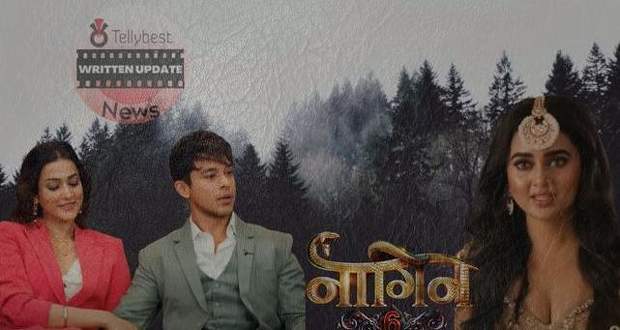 Today's Naagin 6 25th September 2022 episode starts with the minister praising Rudra for his honest work while Anmol looks at Rudra with sad eyes.

On the other hand, the professor decides to crash at the fundraising event as he is sure there will be a terrorist attack on the minister.

Meanwhile, in the fundraising event, the fashion show is in full swing.

Anmol then walks out on the stage as a showstopper while Rudra just stares at Anmol.

Elsewhere in the dressing room, Prathna is cursing Rudra for ordering her to cover the fashion show.

At the same time, Anmol enters the dressing room and Prathna starts asking questions Anmol regarding her ramp walk.

While Prathna and Anmol are busy talking, a model falls face flat on the floor by mistake.

Seeing this, Anmol starts requesting Prathna to be the showstopper in the next round and Prathna agrees.

Later, when Prathna appears on the stage for the ramp walk, the professor arrives near the stage.

Seeing Prathna on stage, he starts feeling worried for her.

At the end of the walk, Prathna is about to lift her veil but everyone gets a notification alert that states there will be a bomb blast in the fundraising event just in a few minutes.

As expected, everyone gets worried and starts running around.

Rudra goes to check on the minister and finds him dead much to his own shock.

In the meantime, Rudra notices a black hooded guy running with a bomb and starts following him along with his collogue.

On the other hand, Anmol urges Pratha to let her go back to the auditorium to save Rudra.

Though Pratha is not sure yet she agrees with Anmol.

Later, while running, the back hooded guy drops the bomb on the stage in front of Anmol.

Seeing this, Anmol stands there in a shocking state.

At the same time, Prathna arrives on the stage and saves Anmol by turning into Shesh Nagin.

While Prathna is throwing the bomb away, the professor arrives there and gets shocked to see Prathna’s Naagin form.

Meanwhile, Pratha notices the bomb blast outside and runs to check on Anmol.

When Pratha arrives in the auditorium, she only finds Anmol lying on the stage.

On the other hand, the professor is walking back into the dressing room while Prathna is feeling weak.

When Prathna mentions it, the professor informs Prathna that she is a Naagin.

In the meantime, Anmol comes back to her senses and tells Pratha that a big snake saved her life today.

Before Pratha can say anything, Anmol starts questioning her about Rudra’s safety.

At the same time, Rudra arrives there and gets surprised to see Anmol risking her life for him.

Seeing Rudra, Anmol gets quiet but Rudra kneels down on his knees and proposes to Anmol for marriage.

On the other hand, Patali meets the Maha Sapera (Snake Charmer) in the cave and asks him if he wants to kidnap Prathna.

While Maha Sapera narrates the story of Pratha killing his senior, Urvashi and Suhasini arrive there out of nowhere and kills Maha Sapera’s friends.

Afterward, Patali orders Maha Sapera to work for her if he wants to save his life.

Later, Patali comes in front of car of Rudra’s parents intentionally and pretends to get hurt.

Mrs. Raichand tries to offer Patali some money for her wound, however, Patali begs for a job.

Office romance between Prathna and Rudra

The next morning, Prathna arrives in the office and gets surrounded by some Saperas who are playing Nag Bin.

While Prathna feels dizzy, Rudra arrives there and orders the Saperas to go out.

After the Saperas leave, Rudra asks Prathna if she feels okay or not and Prathna nods.

Later, Prathna enters the cafeteria while Rudra is changing his shirt.

Seeing this, Prathna gets shy and urges Rudra to get dressed quickly while Rudra enjoys Prathna’s embarrassment.

Afterward, Prathna enters Rudra’s office room to get some paper but while coming out she collides with the door and papers fall from her hand.

As expected, Rudra comes to Prathna’s help and starts collecting the papers.

During the paper collection, Rudra locks eyes with Prathna while the Kesariya song plays in the background.

Meanwhile, the professor confronts Suhasini for switching Pratha’s baby with his baby.

He further announces in a sad voice that now he can not even tell his daughter that she is a Naagin while Suhasini just smiles.

In the meantime, Rudra’s parents arrive in the office with Patali and order the manager to give Patali a job and the manager agrees.

Later while distributing the coffee, Patali goes to Prathna and urges her to take the coffee.

Prathna denies it due to her absent mind and Patali tells Prathna that she looks like someone.

Afterward, Prathna is walking away, while Patali stares at her from behind and thinks to herself who will win the battle this time she or Pratha?

In the upcoming story of Naagin 6 on 25th September 2022, Prathna will become the Sarvasrestha Nagin to carry on the legacy of Pratha under the influence of King Thakshaka.

So far in the story of Naagin 6, Prathna has transformed into a Shesh Nagin but she has forgotten about it.

Later while Prathna and the Guzral family are busy with the fundraising event, Patali and Suhasini are plotting an attack.

According to the latest spoiler of Naagin 6, Pratha will decide to visit the Naag Mahal during the Maha Navratri puja.

When she enters the Naag Mahal, Pratha will be shocked to see a new Shesh Nagin doing the puja in front of her.

Let’s see how Pratha will react when she will come to know that Prathna is her daughter who has already turned into a Shesh Nagin.

© Copyright tellybest.com, 2022, 2023. All Rights Reserved. Unauthorized use and/or duplication of any material from tellybest.com without written permission is strictly prohibited.
Cached Saved on: Monday 21st of November 2022 08:52:15 AMCached Disp on: Wednesday 7th of December 2022 12:43:32 PM