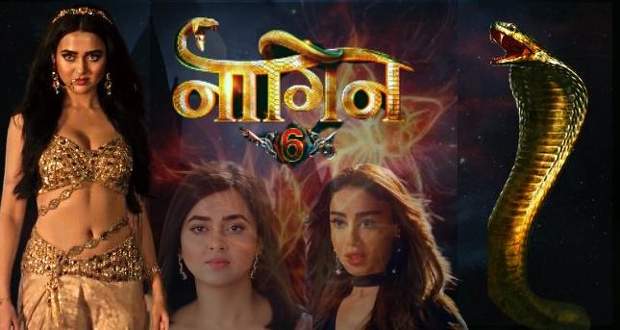 In the upcoming story of Naagin Season 6 on 26th June 2022, Pratha will be making her comeback with a brand-new haircut.

So far in the story of Naagin 6, Mehek has lost her powers but she doesn’t know about it.

Yeti who fought with Mehek was Farishta in disguise who wanted to help Pratha be the true bearer of Sarvashreshth Naagin.

According to the latest spoiler of Naagin 6, Pratha is on her way to killing all the five people who killed her baby.

The five people include Rehan, Vihaan, Rishabh, Mehek, and Ritesh.

It will be interesting to see Pratha enter the Gujral Mansion once again to fulfill her objective of redeeming the death of her baby in the future episodes of Nagin 6.

Pratha celebrating her birthday with her jail inmates.

Pratha tells the little girl to attack boys a thousand times if they attack her one time.

Meanwhile, Urvashi is worried about Zain getting angry as she is not able to get a hold of the land owned by Rajesh Pratap Singh.

However, Mehek informs Urvashi not to worry as Rajesh Pratap Singh is arriving in Delhi for Rishabh's party.

On the other hand, Chanda hears a knocking behind the mystery door.

As soon as she decides to open it, Urvashi slaps Chanda and tells her not to ever do that again.

Reem sees Urvashi slap Chanda and asks her about the past about the mystery door.

When Urvashi falls asleep, Reem steals the keys to the mystery door and decides to check it out herself.

However, Reem gets scared when she sees a familiar figure with an exact face like Rishabh.

Rishabh has a Twin - Shakti

It is Rishabh's twin, Shakti, who screams at Reem and is about to attack her but Urvashi saves Reem just in time.

Terrified, Reem informs Urvashi that the man inside the room looked exactly like Rishabh but his eyes were blue.

Urvashi explains to Reem that it is Rishabh’s twin who had been locked by Seema because of something terrible he did.

However, Shakti was closer to Seema and followed in her evil footsteps.

When Rishabh went for his Army training, Shakti pretended to be Rishabh and called Sia, the girl who liked Rishabh.

When Sia pushed Shakti away from her, Shakti killed Sia by throwing her off the cliff.

Scared for Shakti’s safety, Seema told everyone she killed Shakti because he hurt Sia.

In reality, Seema locked Shakti in a storeroom for years and years on end.

Meanwhile, as Rishabh gets ready to attend the party hosted for Rajesh Pratap Singh, he hallucinates Pratha.

In his imagination, Rishabh gives Pratha a necklace as it is her birthday but he soon snaps out of it and says he hates Pratha as she is the one who put Seema into a coma.

On the other hand, Urvashi further tells Reem that it was Shakti who helped Meher betray Pratha but Pratha thought of him as Rishabh.

Pratha is back as Kiara Sharma

Urvashi doubts Mehek and asks her if she is Shesh Nashik or not.

However, Mehek tells Urvashi if she was not Shesh Naagin, how would Yeti attack her then.

Rishabh gets shocked the most to see Pratha in a new makeover with an English accent who is about to be Rajesh Pratap Singh’s wife.

Chanda seems happy and behaves nicely with Kiara Sharma who in reality is Pratha but Pratha does not let anyone believe that she’s Pratha.

Telling Rajesh that no one seems to talk to her at the party and she is bored, Rishabh asks Mehek to entertain Kiara.

Mehek tells Kiara that she looks like her little sister, Pratha, but Kiara does not take it as a compliment.

To ease Kiara's sour mood, Mehek announces a couple of dances for Rajesh and Kiara and Rishabh gets jealous when he sees Kiara dance with Rajesh.

Rishabh knows Kiara is not Pratha but he cannot help but suspect her real identity.

When the party is over, Jwala asks Pratha about everyone's reaction. Pratha is confident about her Inteqaam being successful.

Rajesh also tells Pratha that after her revenge is over, Pratha and he will go their separate ways.

Pratha assures Rajesh that she has nothing else on her mind except punishing the killers of her baby.

On the other hand, Mehek can't help but be paranoid to see Pratha's doppelganger, Kiara.

She spies on Kiara as Pratha knows Mehek is watching her. Kiara then kisses Rajesh to make Mehek believe that she is Pratha.

However, it is another Naagin in form of Rajesh that Pratha uses to make Mehek believe that Rajesh and Kiara are romantically involved.

Meanwhile, Reem follows an unaware Urvashi who is taking food to Shakti. Urvashi gets scared and scolds Reem for following her like a shadow.

However, Reem says she is starting to like Shakti as he is more handsome than Rishabh. Urvashi wants to slap Reem and asks why she only likes crazy boys.

Tired of Reen's persistence, Urvashi asks Reem to stay behind her as Shakti is a dangerous person and can attack her anytime.

A scared Urvashi takes food to Shakti as he growls and is chained.

He asks where is Mehek because Mehek promised something to Shakti. However, Urvashi reveals to Shakti that Seema Gujral is dead.

Reem asks Urvashi why she lied to Shakti as Seema is in a coma, not dead.

He begins to cry and wail for Seema but starts to laugh a second later, confirming a confused Urvashi if the old lady is dead or not.

Urvashi calls Shakti a "Kamina" when he thanks God for making Seema die because due to her, Shakti has been living a prisoner life.

Urvashi stutters when Shakti threatens her to bring Mehek because he wants to have sex with her.

However, Mehek will not come and Urvashi knows it. To save her life, Urvashi lies and promises Shakti that Mehek will come to him.

Laughing like a devil, Shakti says he will come out of the chains if Urvashi does not send Mehek to him.

© Copyright tellybest.com, 2022, 2023. All Rights Reserved. Unauthorized use and/or duplication of any material from tellybest.com without written permission is strictly prohibited.
Cached Saved on: Monday 21st of November 2022 12:29:40 PMCached Disp on: Thursday 8th of December 2022 02:22:25 AM