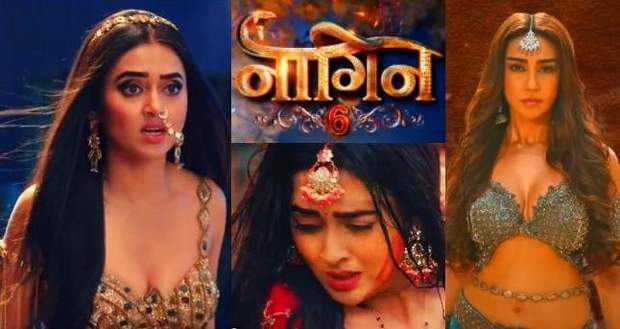 Today's Naagin 6 26th March 2022 episode starts with Pratha and Mahek trying to find the truck which is carrying the poison made by Chingistan to destroy Bharat completely.

Mahek gets confused as many trucks pass by the checkpoint. Using her powers, Pratha tells her elder sister that it is the truck with a red flag attached to it that is carrying the poison manufactured by Chingistan.

Both the sisters take the form of serpents and follow the truck speedily. Holding the truck by its tail, Pratha and Mahek stop the truck until the driver is forced to come out of it to check what is wrong.

Mahek takes her human form and opens the back door. Pratha keeps an eye on the driver until he interrupts Mahek from doing so. Looking into his eyes, Mahek hypnotizes the driver and kills him with her poison, leaving two vivid bites on his neck.

When both the sisters open the truck, they find it empty and are rendered shocked. Mahek shakes her head in disbelief while Pratha informs her elder sister that this time Chingistan has sent the poison or the Vish in the form of a human.

It is then that Laal Naagin enters the scene, introducing herself to both Pratha and Mahek. Pratha gets enraged when Laal Naagin confidently says of destroying Bharat.

Calling herself Shangri-La and being manufactured by Chingistan, Laal Naagin contains poison so potent that is capable of causing huge waves of the pandemic for the people of Bharat.

Pratha and Laal Naagin exchange harsh words between one another until they both decide on a decisive dual.

On the other hand, Reem overhears Rishabh’s confession of getting married to Pratha to know more about who is causing harm to Bharat.

Amidst telling this to his friends and colleagues, Rishabh also confesses that his real love has always been Reem, and marriage to Pratha is a compulsion to save his younger brother.

After hearing this, Reem confronts Rishabh. Rishabh becomes closer and tells Reem that he loves her yet he is bound by his commitment to Bharat.

However, he tells her to wait until he figures out if there is any connection between Pratha and the missing of Reem’s father and Lalit losing his memory.

Pratha and Laal Naagin fight and Mahek becomes concerned for her sister. However, Pratha realizes her true powers of being Shesh Naagin and pulls out the poison from Shangri-La’s neck forcefully.

Laal Naagin gasps out in horror and surrenders herself in form of a defeated serpent. Pratha locks her in a powerful case and releases it in the Yamuna River.

When she enters the room, all soaked up and decked in a saree, Rishabh suspects her. He asks where she was all night.

Pratha makes a bogus excuse of being with Hina (Mahek) as Hina had to inform her family that she will stay here only and won’t return to Delhi.

While answering Rishabh, Pratha notices a lipstick stain on Rishabh’s jacket and confronts him about it.

Mahek then pleads with Pratha to not fall in love with Rishabh as she noticed how jealous she got seeing the lipstick stain.

Downstairs, another surprise awaits Mahek and Pratha. A new member has entered the Gujral family.

Both the sisters get suspicious and it is Shangri-La. Pratha’s eyes widen in shock.

Seema has hired Shangri-La as Lalit’s psychiatrist. Laal Naagin introduces herself as Shagun and all the men of the family drool over her.

Reem gets irritated as the decorations she did for Rishabh’s family go unnoticed and no one pays attention to Rishabh.

To cause trouble, Shagun tells Rishabh that she knows Pratha as she met her last night near the Yamuna.

Rishabh looks at Pratha suspiciously and fakes a laugh. Getting her alone, Rishabh tells Pratha he will only tell whose lipstick stain it was on his jacket if Pratha tells him where she was last night.

Just then, Reem confirms Pratha’s suspicion as she cleans the lipstick stain to make Pratha jealous. Pratha walks away.

Shangri-La challenges Pratha and tells her that she won’t go down without a fight until and unless she has retrieved her “Vish” back as she is the Vish Naagin; the most poisonous of all.

Later, Shangri-La takes Pratha’s form and causes Mahek to spill out the truth about where the sisters hid the poison.

Mahek gets shocked when Laal Naagin reveals it is her and not Pratha.

Mahek informs Pratha about her slip up on the way. However, Pratha is not concerned much about Shagun’s entry into the Temple as Shiva’s energy won’t allow Shagun to enter.

Laal Naagin attempts to get her Vish back

However, Shagun hypnotizes two other men with her hypnotic gaze and orders them to bring “Raqt Kamal” to her; the place where Pratha and Mahek hid the poison.

Well aware of Laal Naagin’s tactics, Pratha stops the hypnotized men and lets them free before they can retrieve the “Vish” with their impure hands.

Shangri-La gets angry and resolves to destroy Pratha and Bharat completely.

According to the precap of the Naagin Season 6, 26th March 2022, Pratha and Mahek will leave for the forest to save Bharat from the spread of the pandemic.

However, as a challenge posed by the enemy country Chingistan, the Naagin sisters (Pratha and Mahek) will face the poisonous ichchaadhari Lal (Red) Naagin, who has come to destroy Bharat.

Pratha and Mahek will unite their powers to battle with the Red Naagin in the future story of Naagin 6.

The forest will become a warzone with the warrior Sarvshreshth Shesh Naagin Pratha and the warrior Lal Naagin fighting off each other.

Earlier the Asuras had claimed that Lal Naagin is more powerful than the Sarvshreshth Naagin herself.

Will Pratha succeed in saving the country from the poisonous attack of Chingistan or is there any surprising secret going to get revealed on the battlefield?

To get to know more, download Naagin 6 all episodes or watch online today's (26 March 2022) latest full episode, go to voot.com