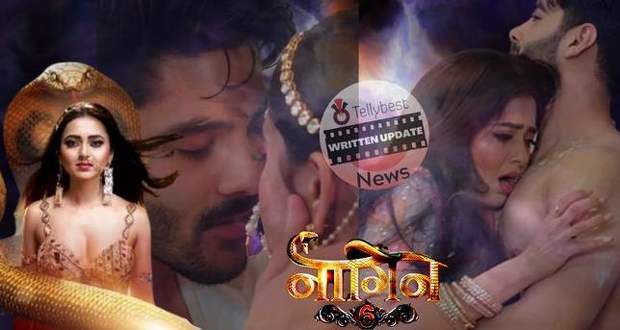 Today's Naagin 6 27th August 2022 episode starts with Pratha calling Naag Raani AKA Meheck so she can know the whereabouts of her baby.

Meheck unwillingly appears in front of Pratha since she has to follow all the rules of being a Naag Raani.

Pratha gets emotional and asks where her Meheck Didi is who used to care for her so much.

Mehek gets emotional and hugs Pratha, saying Pratha ignited the same Meheck Didi but it is all a ruse when Mehek pushes Pratha back forcefully.

With no option left, Pratha says she will ask Naag Raani for justice and Mehek has to dispense it.

Building a circle of fire surrounding Mehek, Pratha asks where her baby is from Mehek, girdling her snake’s tail around Mehek’s shoulders.

Mehek says she will leave after delivering the deepest pain ever known to Pratha and kills herself with a knife.

She jumps off the cliff, leaving Pratha crying and screeching.

Rishabh comes and hugs Pratha while she struggles to speak coherently.

Pratha says where will they find their baby girl in this big world but Rishabh is sure since they are together now, their strength will lead to their baby.

Rishabh and Pratha arrive at Gujral House and Chanda cannot believe her eyes.

She first thinks of Pratha as Kiara but realizes that only Pratha was Kiara. Rishabh’s sisters hug him, telling him they knew Pratha Bhabhi would be back one day with Rishabh Bhai.

It is getting dark and Rishabh asks Pratha to rest while he fetches her a glass of water.

However, when Rishabh goes inside the kitchen, he hears the noise of someone growling and grunting.

Pratha gets worried and goes to see Rishabh but he says he heard some noise here.

Pratha says since the weather is changing, sometimes, the wind also makes noise.

Pratha gets a nightmare

Both of them go to sleep peacefully but in the middle of the night, Mehek arrives in Rishabh and Pratha’s bedroom with her baby.

Mehek says Pratha must be shocked to see her alive but she will not die so easily.

Mehek holds Rishabh in one place by her tail while Pratha changes herself into Shesh Naagin to free Rishabh.

However, this is just a nightmare, and Pratha screams, calling for her baby.

Rishabh calms her down by hugging her and Pratha says she cannot begin her new life with a lie.

She confesses that she is Shesh Naagin but Rishabh accepts her saying, it doesn’t matter because he loves her.

However, this is not Rishabh but Shakti. Shakti hit Rishabh in the head when he was grabbing water for Pratha.

The next day, when Pratha doesn’t see Rishabh sitting at the breakfast table, she starts looking for him.

Shakti throws water at an unconscious Rishabh and says now what is Rishabh’s will be Shakti’s.

Rishabh growls at Shakti when Shakti says he will give Pratha a baby since she is wanting a kid so bad.

Just then, Pratha enters the darkly lit storehouse while Shakti puts a handkerchief in Rishabh’s mouth to shut him up.

After breakfast, Shakti tries to woo Pratha into making love to him but she hears Reem’s baby cry for her.

Shakti gets angry at Pratha who sleeps with Reem’s baby.

On the other hand, Pratha finds Mehek’s phone and calls a number she has called multiple times.

Pratha goes there and asks the staff whether she can find her baby or not.

Meanwhile, Shakti’s mind is also on Rajesh Pratap Singh and sees him as a hurdle in his and Pratha’s relationship.

Shakti goes to Rajesh’s house and sees Pratha and Rajesh’s wedding photo and puts fire on it.

Divya sees it and asks what is Rishabh doing here.

Shakti says he is not Rishabh and Diya realizes that Shakti is out of the storehouse.

Divya runs away scared but Shakti grabs her hair and slams her head against a wall.

Rajesh sees Divya unconscious on the floor while Shakti runs away.

Rajesh’s mother thinks he has hurt Divya and also puts the blame for killing his wife on Rajesh.

Rajesh’s mother’s feet slip but Pratha saves her by her tail from falling on the floor.

The police arrive and arrests Rajesh for thinking he killed his wife.

Back at home, Rajesh’s mother arrives to say thank you to Pratha and Shakti appreciates himself, saying he has finally gotten rid of RPS.

Shakti gets happy when he finally gets Pratha alone.

He first starts emotionally manipulating Pratha saying if he is causing anguish to her, he can sleep in the other room.

Pratha holds his hand and tells him she just misses her baby.

Pratha gets ready to get intimate with Shakti, thinking he is Rishabh but Rajesh’s mother's phone rings abruptly.

Shakti curses while Pratha promises to return after giving Rajesh’s mother her phone.

Pratha then learns that Rajesh’s mother used to work in an orphanage and asks if she has any idea whether any baby came that night when Pratha was pregnant.

In a flashback, it is shown that Urvashi took Pratha’s baby and tried to make her drink venom but nothing worked.

Mehek said Pratha’s baby looks just like her with round eyes but she decides to use her as a pawn in the future.

That night, she also saw a man in distress walk into the orphanage who lost both his pregnant wife and kid.

However, a miracle happened and his baby was saved but not his wife.

The man then decided to raise both his baby and the baby Mehek gave to the orphanage together.

The man was none other than the Professor who reminded both Pratha and Mehek of their duty of safeguarding Bharat.

In the upcoming story of Naagin 6 on 27th August 2022, we will see a new face of Shesh Naagin requesting Lord Shiva to protect her babies!

So far in the story of Naagin 6, Rishabh and Pratha finally meet each other after years of separation on the holy land of Kedarnath. Both the lovers swear never to separate ever again or let the third party like Urvashi and Meheck ruin their pure love relationship.

According to the latest spoilers of Naagin 6, Pratha will learn that the baby she delivered is not dead but alive!

However, Mehek will commit suicide without telling Pratha about the whereabouts of her girl child.

Drunk on pain & desperation, Sarvasrestha Naagin will bare her heart out in the lap of Lord Shiva to protect her girl.

As per the upcoming twists of Nagin 6, Rishabh and Pratha don't have one but two-two baby girls!

This time Pratha will be back as a mother, not just as a Nagin, requesting the Supreme Lord to watch over her girls.

This two-hour special episode will witness a lot of scenes filled with action, drama, and romance with PraRish winning the hearts of all the Naagin fans across the globe.