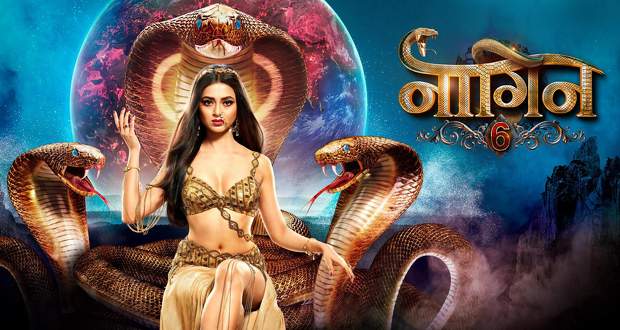 Today's Naagin 6 27th February 2022 episode starts with Seema agreeing to marry off Rithesh with Pratha and sweet talks about her.

While Pratha says she never agreed to the marriage, Seema respectfully asks her hand for the marriage to her father.

At the same time, Pratha’s father excuses himself to talk with Pratha. He convinces her and tells her that he is worried about her future.

Pratha, after contemplating for a while agrees to the marriage, making herself clear that she is not marrying Rithesh for his money.

Though Riya’s marriage gets canceled; Urvashi, for the sake of Ream's happiness asks Seema to forgive her and hugs her mending their friendship again.

Meanwhile, Meheck starts feeling strange and her skin starts glowing under the light of the blood-red moon showcasing the sharp exotic lilac-colored scales of her snake form.

At the same time, all vipers gather around Meheck, blessing her with strength and power.

At the same time, Lalith praises Seema for managing the whole crusade.

On the other hand, Meheck with all her powers enters the temple and plans to examine everyone’s palm by offering a prayer plate. Lalith exposes his palms to the fire.

Meheck feels all her rage fueling upon witnessing the mole in his palm.

Elsewhere, Seema consoles Reem that she will take care of her like her own daughter and says Riya is destined to meet a better suitor.

Suddenly, Mayank harshly grabs Pratha’s hand and says, her in-laws are in great danger. He also informs her about his encounter with Naagin, witnessing her transforming into a snake.

Lalit senses someone's presence around him, but his doubt is satiated with the presence of Minister who appears out of nowhere (it is Meheck disguised as Minister to get back at Lalit as the truth of him being the Asura is out).

Lalith informs him about the deal taking place in the jungle behind the temple, Meheck (disguised as Minister) follows him.

On the other hand, Mayank gets in front of Rishab’s car. He informs him about the threat and asks him to enter the jungle to save his father, Lalit.

Whilst, Meheck discloses herself as Naagin in front of Lalith and announces that she is going to kill him.

Surprisingly, Lalith was aware of the fact that she is Naagin all this while. He is also well prepared and brings world-renowned snake charmers to kill her. Meheck loses all her control and starts dancing to the tunes of snake charmers and gets trapped in a net.

At the same time, Pratha and Rishab start searching Lalit to rescue him.

However, Pratha reaches first and keenly observes Meheck and questions Lalith why the security in charge was trapped in a net.

Hence, Lalith discloses that she is Naagin a supernatural creature. Pratha suddenly screams like a banshee listening to the tunes of snake charmers.

Pratha announces that she is also a Shesh Naagin her skin glows exquisitely to the moonlight, her golden scales shine and her intriguing eyes turn to golden color. Pratha fully turns as Shesh Naagin.

Shesh Naagin Meheck is set on a journey to find all the traitors of the country who are cheating the country.

Will Meheck be successful in the task given to her by the professor or does Sarvashreshth Shesh Naagin has to descend from her deep slumber to save the country from the crooks breeding in the homeland?