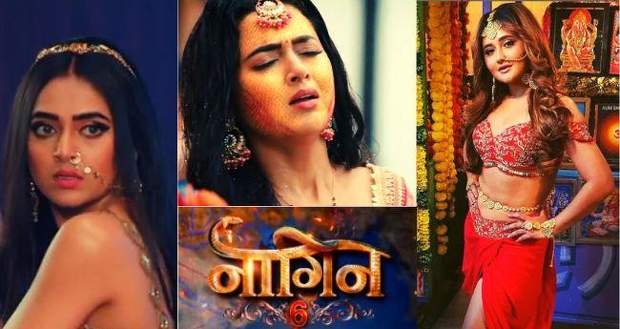 Meanwhile, Pratha thanks God for hiding the poison and helping them.

On the other hand, Shanglira thinks of a plan to get her poison back. She morphs herself into a needy woman and deceives Rishabh to get the blessed garland of Lord Shiva.

Shanglira obtains her poison back while Pratha follows her to stop her from polluting the Yamuna river.

Later, Pratha helps an elderly woman by accepting her offering for her puja.

The woman feels contended and expresses her gratitude to Lord Shiva.

Pratha shows Shanglira her massive variation as she is blessed by Lord Shiva himself.

Pratha calls Shangrila a snake made in the laboratory and cannot fight for long as compared to the Naagins of our country.

Later, Shanglira pleads for Pratha’s mercy by saying the people of India have a big heart and forgive easily.

Evil Shanglira backstabs Pratha in her spine where her Naagmani is embedded.

Pratha falls on the ground while rain pours on her reminiscing about her life and her pledge to save the country.

In order to save her country, Pratha prays to her beloved Lord Shiva to give her strength by residing his blessings in Pratha’s eyes.

Pratha uses her remaining powers to freeze Shangrila and gets unconscious.

Shalakha comes to the rescue

Meanwhile, Mehak arrives at the spot while her eyes rage on watching her sister Pratha in this condition.

Mehak takes her to the professor to save her life and regrets not being there for her sister.

The professor advises Mehak to find Shalakha whose face Shanglira has acquired to destroy this country.

To obtain her powers back Shalakha has resided in the mountains of Nilgiri and Mehak invocates her to arise and kill Shanglira.

Shalakha promises Mehak to take revenge from Shanglira which might help her to get her powers back.

Rishabh and Reem discuss the secret Pratha might be hiding and find out about her past.

Shanglira wakes up and waits to complete her plan. While Shanglira thinks of her plan to poison the Yamuna river, Shalakha arrives.

Shalakha proposes Shanglira give her the Naagmani while she will help her to poison the country.

As soon as Shanglira agrees to form her pact with Shalakha she fights her to save Pratha's life.

Later, at Gujral Mansion Rishabh tries to be romantic with Mehak who is dressed as Pratha. Mehak escapes and walks out of the room to reach her injured sister Pratha.

Shalakha manages to save Pratha

After various attempts to save the Sarvashreshtha Naagin, Pratha wakes up to protect her country.

On the other hand, Shalakha captures Shanglira in a fire ring and stabs Shanglira with the holy spear of Shiva.

However, Shanglira wakes up and throws the poison in the Yamuna river.

Meanwhile, Shalakha manages to save Pratha by her efforts.

The Yamuna river is poisoned but, Shalakha informs that Shanglira managed to succeed in her plan before dying.

The Professor refers to Samudra Manthan and suggests Pratha solves this problem by drinking the poison in the Yamuna river.

As per the precap of the Naagin Season 6, 27th March 2022, Lal Naagin will try to create problems for Pratha.

Enraged and desperate to get back her Vish, Laal Naagin resolves to go to any extent to prove her loyalty to her country, Chingistan.

At the same time, Hindustan’s Shesh Naagin, Pratha is determined to prevent Lal Naagin destroy Bharat from inside out.

Taking the form of an old lady who takes the garland carrying the Raqt Kamal, this is Laal Naagin’s second attempt to take her Vish back.

However, Pratha does not let her do so and fights with Laal Naagin near the Yamuna anew.

But this time, Pratha could be in danger. Lal Naagin pierces Shesh Naagin’s back with a dagger.

Shesh Naagin’s spine is the most sensitive of all places and harming this can be her end.

Is this Pratha’s end and will Bharat’s Shesh Naagin succumb to Chingistan’s Laal Naagin?