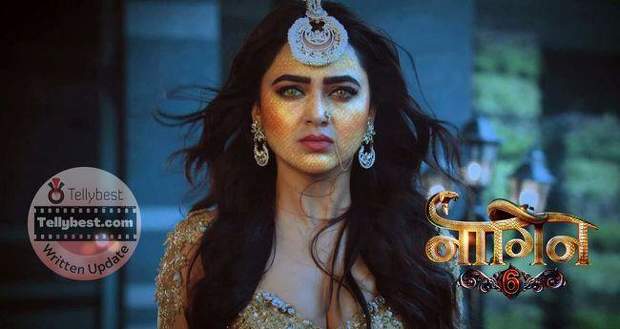 Today's Naagin 6 27th November 2022 episode 86 starts with King Takshaka telling Prathna & Pratha the tale of Puloma & Nageshwari and how Puloma stole the precious Naag Mani from Nageshwari and troubled the other serpent members in Patal Lok.

Pratha asks Kaliya Nag to tell Prathna's future but he says, he can delve into the past but cannot reveal the future.

A flashback is shown where Nageshwari is in deep contemplation while Puloma steals all the eight Naag Manis around her.

After Nageshwari opens her eyes, she gets worried and goes to Kaliya Nag for help.

Tale of Puloma & Nageshwari and the mysterious anklet...

At this moment, years ago, Kaliya Naag gives Nageshwari the bracelet that is said to have been worn by Lord Shiva himself while dancing as Natraja.

Nageshwari uses it and destroys Puloma's powers and the flashback ends.

Kaliya Nag asks Prathna to use her position as Shesh Naagin very well since she can either destroy or preserve Patal Lok with this single anklet that was once worn and used by her great-grandmother.

However, the anklet starts to glow red and Kalia Nag asks both Pratha & Prathna to keep it away from Singhika's statue.

On the other hand, Patali sees Singhika's statue glowing and realizes that the mother-daughter Nagin duo is near them and can come anytime.

Pratha enters the cave first and threatens Patali that she is here to kill her.

Urvashi hides while Patali orders Anmol to go and take the anklet away from Prathna.

Pratha hits Patali and the protective thread from her hand falls away.

Taking advantage of the situation, Pratha unleashes several black snakes to bite Patali while Urvashi hits Pratha away from her and gives Patali the safety net of the thread.

Prathna shrieks, seeing Pratha helpless on the floor while Anmol follows her and hits her spinal cord with a big dagger.

They leave with the Nag Mani & the anklet while Pratha quickly prepares a herbal paste to be applied over Prathna's back for the revival.

Prathna wakes up and hugs her mother, Pratha, immediately. Meanwhile, Patali goes to the 'Sardaar' or chieftain of the Asura clan and presents the anklet to him.

Rishabh Gujral is back!

She then appreciates Anmol and manipulates her mind by saying that one day, she will not only rule the Asura world but the whole world.

Anmol looks at Rishabh who is lying with an oxygen mask over a cot and tells him that she loved him very much but after he started loving Prathna, she transforms her love into hate.

Anmol promises to revive that love again after Prathna is dead.

Before going, Patali informs the stranger woman who is looking after Rishabh to take care of the Nag Mani and not reveal her identity as the purpose of keeping her secret for long years will go waste.

On the other hand, Rudra is drinking alcohol and mumbling to Anmol that Prathna destroyed his whole life.

However, Anmol tries to console his aching heart but cannot get over the moon-eyed face of Prathna.

Later, Urvashi is driving the car when she says she has to change the tyre.

Urvashi asks Anmol to get stones when Prathna hits her head while Pratha makes Urvashi faint.

Pratha takes Urvashi's avatar while Prathna takes Anmol's and they both enter the car with Patali.

Ritvik then takes unconscious real Urvashi & Anmol and ties them to a chair.

Patali gives the anklet in her hand while Prathna comes in her real avatar along with Pratha.

Seema Gujral is alive & back!

Pratha glares at Patali angrily while she throws an arrow at Pratha but Pratha snubs it away with her tail.

They kill Patali along with the Sardar.

Just then a lady in the veil comes, saying the game is not yet over.

She is Seema (Patali's daughter) and calls Pratha her bahu. Pratha gets surprised and vows to kill Seema too but Seema warns Pratha, if she kills her, Rishabh will die too.

In the upcoming story of Naagin 6 on 27th November 2022, Pratha & Prathna placate the Kaliya Nag and find out the mystery behind the anklet worn by Pratha's grandmother, Nageshwari.

So far in the story of Naagin 6, Patali convinces Urvashi and Anmol to go to Pataal Lok to get the bracelet from Prathna.

Further, Rudra gets to know that Prathna killed his parents but she removes his memories.

According to the latest spoiler of Naagin 6, Prathna encounters Anmol who asks her to give Nageshwari's anklet to her.

Prathna denies giving it and in a moment of anger, Anmol pierces Prathna's back with a dagger; the weakest spot of a Shesh Naagin.

Is this the end of Prathna's track?

Let us see what Pratha does to revive Prathna and what is in store for Anmol who is perfectly in sync with the Asura clan now in future episodes of Naagin 6.