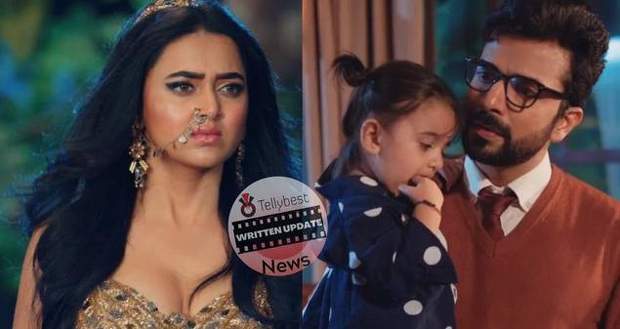 Today's Naagin 6 28th August 2022 episode will not be telecasted due to Ganesh Utsav.

So far in the story of Naagin season 6, we see Rishabh and Pratha reuniting on the holy land of Kedarnath.

However, the fake marriage between Pratha and Rajesh Pratap Singh grew real for Rajesh and he started having feelings for her.

Pratha is a Shesh Naagin with a fixed destiny that is decided by Lord Shiva. That is why King Takshaka did not resurrect Rishabh since he knew Rishabh didn't die.

It was not Rishabh who died in the fire but an ordinary policeman. With no motive to declare himself alive to the public, Rishabh went underground to track all the anti-nationals working against Bharat from the inside.

At Kedar, Rishabh killed Zain and Pratha beat up Urvashi and Mehek. However, Reem due to the stampede caused by Yeti.

Both Rishabh and Pratha return home after Mehek commits suicide willingly just so the secret of where Pratha's daughter is gets buried with her body.

Pratha is desperate to find her baby girl. However, the chapter of Shakti is still unresolved.

After Chanda tearfully welcomes both Pratha and Rishabh back into Gujral House, Shakti seizes the next best opportunity for Rishabh in the storehouse and assumes his position.

As already revealed, Shakti is lustful toward Pratha and gets to know her Naagin secret but Pratha doesn't know it is Shakti and not Rishabh.

Meanwhile, Rajesh gets arrested by police as his mother thinks he killed his first wife and attacked Divya but it was only Shakti.

Pratha also learns that her daughter was given by Mehek to an orphanage named 'Innocent Heart' and is taken up by a man to raise as his daughter.

Will Pratha be able to track the man?

How will Shesh Naagin react when she comes to know that her daughter was being taken care of by Professor and she has already met her earlier?

In the upcoming story of Naagin 6, Pratha will soon learn about where her baby girl is.

Desperate to find meaning in her life, Pratha will express her deepest yearning to be reunited with her baby.

The current track of Naagin 6 revolves around Pratha and Rishabh finding each other after a very long time. Mehek commits suicide but leaves Pratha in a panicked mode with no information about her baby. Shakti hurts Rishabh and assumes his position in Pratha's life so that he can make love to Pratha.

According to the latest spoilers of Nagin 6, Naga Raj will ask Lord Shiva to watch over Pratha's baby because she is no ordinary baby but Shesh Naagin's baby.

The Professor who has been helping Shesh Naagin track all the anti-nationals does not know he is raising Pratha's baby girl along with his.

It will be Rajesh's mother who will reveal this information to a saddened Pratha as per the latest gossip of Nagin 6.

Let us see how soon Pratha learns where her baby girl is and Naagin 6 story takes a leap to showcase the next generation of Naagin rock this world in the future episodes of Naagin 6.

© Copyright tellybest.com, 2020, 2021. All Rights Reserved. Unauthorized use and/or duplication of any material from tellybest.com without written permission is strictly prohibited.
Cached Saved on: Sunday 2nd of October 2022 05:01:52 AMCached Disp on: Wednesday 5th of October 2022 04:39:22 PM