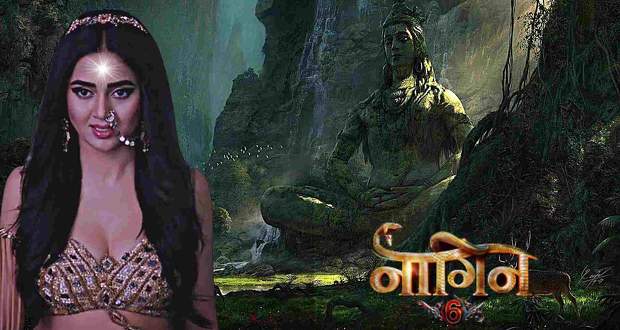 Today's Naagin 6 28th May 2022 episode starts with Pratha entering the Pataal Lok to retrieve the Amrit Kalash her mother hid years ago.

Mehak worries as time runs out but Pratha comes out of Pataal Lok just in time with the sacred and beautiful Amrit Kalash.

Rishabh, Seema, and Renaksh arrive at the old Ujjain Temple to take Chanda away.

As Rishabh being Shesh Naagin’s husband can surpass the Naag Rekha, Seema and Renaksh also follow Rishabh inside.

Seema reveals her true self to Rishabh

Pratha has had enough of Seema’s drama and tells her to stop her dramatic antics as Rishabh almost raises his hand at Pratha.

However, Seema holds Chanda’s neck by the knife and reveals her true self in front of Rishabh.

Seema tells Rishabh that she is not his mother and is only here for the Amrit Kalash.

A wave of betrayal washes over Rishabh as he feels a bloody puke come out of his mouth, making Pratha scream.

Seema informs Pratha that she had given poison to Rishabh prior so she wouldn’t have to deal with all the dramatics over again.

Rishabh lies helpless as he spews blood and looks at Seema, remembering all the lovely moments he had spent with her from childhood till now.

Rishabh tells Pratha that he will take another birth just to be with her as he feels his death come near.

Chanda faints as she watches her son die.

Pratha is angered and swears to destroy Seema as she has nothing left but to save Bharat.

However, Seema negotiates a deal with Pratha to give a cure for Rishabh’s poison if Pratha hands her the Amrit Kalash.

Pratha brings the Amrit Kalash from the sanctum sanctorum as Banno joins Renaksh and Seema.

Seema pours the poison into the Amrit Kalash

The trio chuckles an evil laugh as they pour the poison into the Amrit Kalash and gradually into the river.

However, Banno’s skin burns when he puts his hand into the river.

Seema yells as Shesh Naagin informs Seema that she replaced the poison bottle with the bottle of Amrit.

Pratha also notifies Seema that she breathed in all the poison from Rishabh’s body with her supernatural powers.

Banno’s defeated body tumbles down near the river as he gets exterminated by the healing waters of Yamuna.

Seema escapes before Pratha can catch her.

However, Pratha is concerned with Rishabh’s and Chanda’s well-being right now.

A warm homecoming is received by Pratha as Samaira walks forward to hug Pratha.

When Rehan confronts Rishabh for bringing Pratha back, Rehan gets a tight slap from Rishabh who knows Rehan’s character now.

Rishabh also urges Samaira to slap Rehan as the police arrest him.

An emotional reunion transpires between Lalit and Chanda as Rishabh tells Chanda she is here to stay with everything she deserves but did not get before.

Reem and Ritesh get confused as Rishabh instructs everyone not to take Seema's name again in Gujral Household.

In the upcoming story of Naagin Season 6 on 28th May 2022, Shesh Naagin will be confronted with the evil trio of Seema, Renaksh, and Bhano who wants to poison Bharat.

The current track of Naagin 6 revolves around Seema, the Maha Asura, wanting to get her hands on the consecrated Amrit Kalash to poison Bharat. However, Pratha discovers the Amrit Kalash first.

According to the latest spoilers of Naagin 6, Pratha will be planting a ruse to trap Seema, Bhano, and Renaksh so she can individually punish them for carrying the intent of destroying the same motherland they eat their salt from.

As per the upcoming twists of Naagin 6, Rishabh will also get to witness Pratha's form as Sarvasrestha Naagin as all his prior questions about Pratha's real identity come alive.

The viewers are in for a ride as this episode of Naagin 6 will be the most adventurous of all.

Let us see how the graceful and ferocious Shesh Naagin saves her nation, Bharat, along with her 'sindoor', Rishabh, from the malaise trio of Maha Asuras.