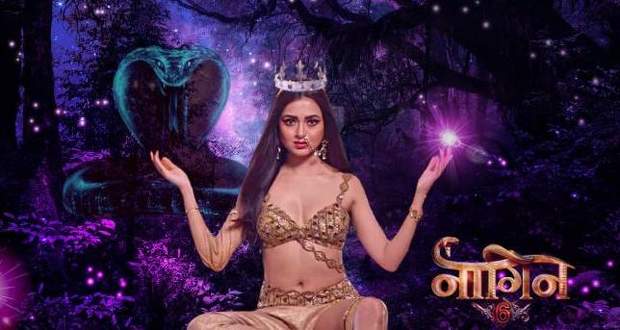 Today's Naagin 6 29th May 2022 episode starts with Rishabh’s Dadi organizing a 'Shanti Havan' to settle the disturbances that have been haunting the Gujral House for a while.

On the other hand, Rishabh struggles with his emotions as he remembers Seema Ma.

He still can’t believe just how much can be changed in a night.

When Rishabh looks for Pratha who is absent from the family’s bickering, he sees two snakes escape the window of his room.

Rishabh rubs his eyes in disbelief as it is Pratha and Mehak escaping in their serpent form to meet the Professor.

The Professor is in awe of Shesh Naagin as he bows down in front of Pratha.

He thanks both Pratha and Mehak for their incredible service to Bharat that could not have been plausible by a mere mortal.

However, when Professor holds Pratha’s hands, his mind shows him a fitful vision of Pratha struggling in near future.

Pratha tells the Professor not to worry as long as she has Rishabh’s support.

Back at home, Anya and Kshitija tell everyone to leave #PraRish so they enjoy some alone time.

This gives momentum to Rishabh to get romantic as he plans a candlelight dinner with Pratha.

Both of them caress each other as Rishabh kisses Pratha but a blackout occurs that gives Seema a chance to hold Pratha hostage.

Pratha screams as Seema holds a knife to Pratha’s neck.

Seema notifies a distressed Rishabh that Pratha is hiding a big secret and is Naagin.

However, Pratha kicks Seema with her leg, making Seema fall down the terrace.

Seema’s head gets injured terribly as Rishabh and other family members shift an injured Seema to the city hospital where the doctors declare Seema in a coma.

Rishabh hugs his wife, Pratha, for warmth as he recalls all the moments he has spent as Seema’s son.

On the other hand, Chanda is worried and wants to tell a secret about Rishabh’s birth to Pratha.

The next day, Rishabh gently teases Pratha out of her slumber by shifting the curtains.

Rishabh kisses her nose and gets on top of Pratha, leaving a trail of kisses over her nape, down to her chest as these star-crossed lovers finally consummate their marriage.

Later, Mehak teases Pratha for being shy and glowing.

Pratha notifies her big sister that she has decided to reveal her secret to Rishabh.

Mehak gets angry and tells Pratha it is not worth it to lose Shesh Naagin's powers and live a life of a mere mortal.

Later, Mehak bumps into Chanda Ma who asks about Pratha and informs Mehak she has a secret to tell only to Pratha.

As Pratha contemplates how to reveal her Shesh Naagin form to Rishabh, Rishabh emerges out of the bathroom with just a towel on his waist.

It is Rishabh’s last day at home before he rejoins his service in the Army.

Rishabh bombards an uneasy Pratha with questions about Amrit Kalash and how Pratha knew about Rishabh’s real mother.

Rishabh gets angry as he spots the old book Farishta gave to Pratha and reads out the title 'Shesh Naagin'.

He shakes Pratha's shoulder, demanding her to spell out the truth.

Pratha whispers that she is indeed Shesh Naagin.

An angry Rishabh tells Pratha that he has been terribly betrayed by her in the name of love and will leave her.

In the upcoming story of Naagin Season 6 on 29th May 2022, Shesh Naagin will kill Maha Asura Seema.

So far in the story of Naagin 6, Pratha tricks Seema and exchanges the poison bottle with 'Amrit', making Seema's grand plan crumble in mere seconds.

As per the latest spoilers of Naagin 6, Pratha's sole focus will be to kill Seema as she has already saved Rishabh from dying along with Chanda Ma who gets reunited with her husband, Lalit Gujral.

Rishabh will also question Pratha's real identity as he finds the old book of Shesh Naagin hidden in Pratha's closet as per the upcoming twists of Naagin 6.

The time has finally come for Pratha to reveal her true identity to Rishabh as the Sarvasrestha Naagin who is not a mere mortal but a Serpent Queen who is blessed by Lord Shiva himself.

Let us see how Pratha meanders her way through more mysteries and secrets in the future episodes of Naagin 6 by notifying Rishabh that he is Shesh Naagin's husband.

© Copyright tellybest.com, 2020, 2021. All Rights Reserved. Unauthorized use and/or duplication of any material from tellybest.com without written permission is strictly prohibited.
Cached Saved on: Friday 1st of July 2022 04:33:37 AMCached Disp on: Saturday 2nd of July 2022 07:39:56 PM