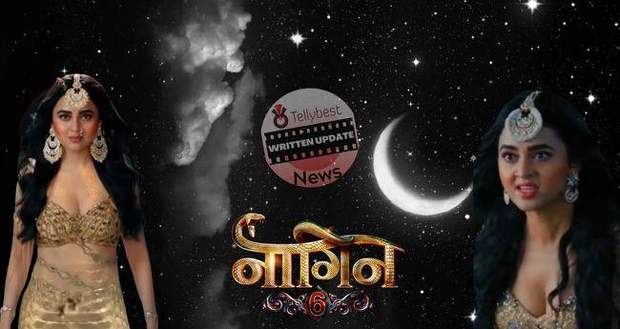 Today's Naagin 6 29th October 2022 episode starts with Rishabh and Pratha rushing down to Anmol who is crying.

Pratha tries to reason with Anmol, saying whoever is destined for her will come to her himself.

However, Anmol has had enough and asks Rishabh how could he willingly give Prathna's hand in Rudra's when she is his daughter.

Pratha agrees with Anmol while Rishabh says it is not in his hands that Rudra does not love Anmol.

Later, Rudra tells Prathna that even though he loves her very much, how this marriage happened is still wrong.

Anmol watches Prathna and Rudra talk to each other from a distance and feels bad.

Taking advantage of the situation, Urvashi whispers in Anmol's ears, saying time is such a swift ball that her love along with her parents' attention has shifted from her to Prathna.

Urvashi then complains to Patali, saying Anmol isn't getting influenced one bit against Prathna & they need to do something better.

Patali then burns the last portion of Anmol's dupatta as well as Prathna's.

Rishabh and Pratha first die out (stop it from burning) Prathna's dupatta, followed by Anmol's.

Urvashi's statement rings in Anmol's ears and she storms off to her room.

She locks the door and starts crying. However, Urvashi walks in along with Patali to fill her ears even more.

Anmol thinks Prathna & Rudra has an affair from long time

Urvashi tells Anmol she did not think she is such a weak girl to take her own life but rather take revenge on Prathna.

Patali then butts in, saying Rudra & Prathna had an affair in the office but to this extent, she did not know.

Meanwhile, as Rudra and Prathna are leaving Gujral Mansion, Anmol comes running behind them & asks both of them to stay.

Pratha gets confused at Anmol's absurd request while Anmol says Prathna is just like her sister, and she understands how one-sided her love was for Rudra.

Anmol then gives the room decorated for her and Rudra to the newly wedded couple, saying they can go back to Rudra's House after Diwali.

On the other hand, Pratha worries about both Anmol & Prathna and the decisions they took.

Rudra tells Prathna she is free to walk out of this marriage as he understands she doesn't love him yet Prathna justifies herself, she sat in the mandap just because Anmol wasn't there.

At night, Rudra tells Prathna he will sleep on the sofa since he has some important work to do.

In the night he researches all about Vasuki Shesh Mandir while Prathna thinks he is helping the anti-nationals of the country.

The next morning, Rudra goes to Rishabh and they both talk about the ancient temple whose door Shesh Naagin will open today.

Zain also informs his team to be there at this temple as the Shesh Naagin will come there.

Both Pratha & Prathna ask their husbands if they can accompany them or not as these are two generations of Shesh Naagin.

Rishabh also asks Anmol to join them but she says she has to make arrangements for the Diwali party.

Meanwhile, Urvashi & Patali also go and invoke a peahen who comes to them.

A Peahen who eats Shesh Naagin?

The peahen takes the form of a human named "Mayuri" who is here to eat the Naagins who have walked in voluntarily.

Rishabh asks the priest if it is true that there is a secret door in this ancient Bhadrakali Mandir.

The priest says yes while Patali introduces Mayuri as her niece who is a big Mahadeva fan.

Mayuri starts a dance to offer to Bharakali & Mahakal while Pratha & Prathna get confused as to who she is.

Pratha then walks out and takes her snake form as Zain spies on her from behind the tree.

Oblivious to the fact that she is no more a Shesh Naagin, Mayuri comes behind Pratha and arrogantly says that she finally came to her real form.

However, Zain gets confused when he sees Pratha is not able to invoke Naag Mani from her belly.

In the upcoming story of Naagin 6 on 29th October 2022, Pratha and Prathna come face-to-face in their Naagin avatar!

So far in the story of Naagin 6, Prathna saves Anmol from dying by freezing time and shielding her from hitting her head on the ground.

As per the latest spoilers of Naagin 6, Pratha realizes that the Naagin who is after Rishabh is Prathna, her daughter.

She confronts Prathna and asks her if she has lost her mind by going after the whole Gujral Family.

However, Prathna assures Pratha that she will kill all of them by making them meet their dead end since Rishabh is one of Jeet's killers.

How will this misunderstanding go away from Prathna's mind and when?

Will Pratha become her daughter's own enemy?

Let us see whether Pratha & Prathna are able to patch up before the evil duo of Suhasini & Patali manipulates Pratha & Anmol's minds in future episodes of Nagin 6.

To get to know more, download Naagin season 6 episode 75 or all episodes or watch the online full-show episode 75 of Naagin 6, go to the Voot app.

© Copyright tellybest.com, 2022, 2023. All Rights Reserved. Unauthorized use and/or duplication of any material from tellybest.com without written permission is strictly prohibited.
Cached Saved on: Monday 21st of November 2022 01:00:32 AMCached Disp on: Saturday 10th of December 2022 02:30:21 PM