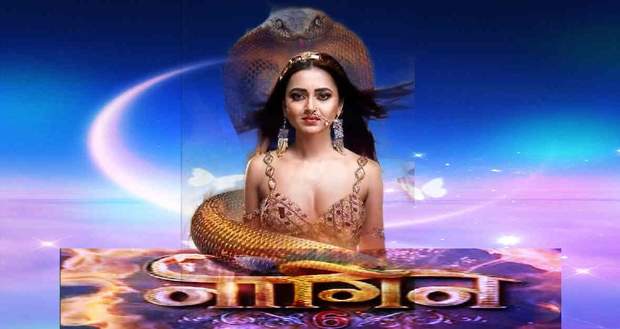 Today's Naagin 6 2nd April 2022 episode starts with the secrets of the valleys of the Nilgiris and the deep dug secret therein. Shalaka, Mahek, and Pratha watch Shangrila’s body lay dead.

However, Shangrila’s “Vish” has already spread in the Yamuna and people are suffering due to it.

The waters of Yamuna turn blood red. Shalaka and Mahek turn toward Pratha in hopes to arouse her to invoke Lord Shiva.

Shalaka encourages Pratha to remember her origin and realize the power she holds being a Shesh Naagin.

This trio of Naagin concludes that there is only one way to suck back the “Vish” already infecting the Yamuna.

Pratha being the Shesh Naagin would have to drink it all.

However, Pratha is clear about her decision; she will do anything to save her country’s soil.

Shalaka, Pratha, and Mahek go to the Shiva Temple to invoke his eternal and divine powers.

Pratha worships the potent Shiva Linga whereas Shalaka and Mahek cover the temple space with flowers.

Shalaka and Pratha dance together, trying to direct Lord Shiva’s grace toward them.

They both transition from their human form to their Naagin form during the dance.

Their invocation gets finished when Pratha feels a tightness in her throat.

Pratha feels ready to swallow the Vish from the Yamuna.

Professor, Shalaka, and Mahek watch Pratha struggle to take all the poison out of the Yamuna.

Pratha takes on a grand form due to Lord Shiva’s Shakti directly transmitted to her.

Shesh Naagin sacrifices herself and is willing to die for her country.

Once Shesh Naagin has swallowed all the poison, her body slowly minimizes and begins to turn black.

Pratha lays down by the banks of Yamuna with her body showcasing blue spots now.

Mahek, Shalaka, and Professor bow down to Shesh Naagin in utmost gratitude and awe.

However, Pratha’s body has weakened terribly after swallowing the Vish.

Pratha hesitates to go back to the Nilgiris

Shalaka tells all of them that Pratha needs to be taken to the temple situated underground near the Nilgiris where she can heal completely.

Pratha denies going there and leaves the spot to go back to Gujral’s residence as the Sun is about to rise.

Pratha gets angry and irritated at Shalaka's persistent request for Pratha to go to the Nilgiri.

On the other hand, Reem and Rishabh question Mayank, Pratha’s ex-fiancé about her past life by bribing him.

Mayank informs Rishabh about a strange incident he saw.

Mayank tells Rishabh that he saw Hina Khanna (Mahek) turn into a Naagin on the night of Rishabh’s engagement to Reem.

Rishabh does not believe Mayank.

However, his mind does drift toward Pratha being another anti-national, involved in this pandemic.

Rishabh is keen to grill Pratha.

However, when he holds half-dazed Pratha under the running shower, he realizes that her body is hot.

Rishabh lays Pratha on the bed carefully and tries to rouse her from sleep.

Just when he is about to remove her wet saree a little so she doesn’t catch a cold, Pratha awakens; alarmed.

Pratha does not want Rishabh to see the blue marks her body harbors right now.

Sudha believes that Pratha is pregnant

Due to this weakened state, Sudha and the entire family witness Pratha vomit.

Sudha decides to call the doctor; however, Radha, Rishabh’s aunt, thinks that Pratha is pregnant.

Pratha does not deny being pregnant so she can be saved from the doctor’s visit.

Rishabh gets confused when Sudha, his mother, congratulates him.

Reem feels hurt and Urvashi advises Reem to keep her distance from Rishabh as he will be a father soon.

The Gujral Family also prepares for the engagement of Radha’s son, Vihaan.

Sudha decides that Pratha will welcome the soon-to-be bride as she is the elder Bahu.

Pratha catches Yash’s eye and he swoons over her.

Meanwhile, on the terrace, Shalaka informs Pratha that the three other Asuras are going to meet her tonight.

So, if Pratha wants, they can be killed tonight. Both of them leave to kill them.

However, the Asuras come to know that it is not Shangrila, rather it is Shalaka.

One of the Asuras runs away while the other two are buried under the ground by Shesh Naagin.

Mahek also discovers a key ring that points toward Riya’s killer. Mahek now suspects that it is someone from the Gujral Family only that pushed Riya off the balcony.

On the other hand, Sudha and Rishabh search for Pratha.

Pratha arrives just in time to initiate Vihaan’s Roka. Rishabh tells Reem that it is not his baby inside Pratha’s stomach.

However, no one knows that Pratha is not pregnant.

Reem watches Rishabh get jealous and has a fantastic idea to keep him away from Pratha.

Rishabh soon gets drunk over his confused, hidden feelings towards Pratha and Reem hugs him at the moment.

Pratha catches both of them hugging and gets angry.

Rishabh follows an angry Pratha and questions her about being mysterious and now being pregnant.

Rishabh wants to know whose baby Pratha is carrying because it is not his.

Rishabh’s speech gets ugly and he claims that Pratha enjoys casual sex due to which she got pregnant and also because she remains absent for long times.

With cheeks and nose turning red in anger, Pratha slaps Rishabh and warns him to never deliver such hateful, ugly speech to her.

Rishabh is left stunned and feels an irresistible craving to know all about Pratha he can.

As per the latest promo of Naagin Season 6, 2nd April 2022, the viewers will see the secret of Nilgiris unravel where Pratha learned the truth about herself being the "Shesh Naagin".

Pratha is slowly progressing into her avatar and fully embodying herself as Shesh Naagin.

The mystery behind the small temple in the Nilgiris will be out in the upcoming episode of Naagin 6 on 2.6.2022.

With this unravelling, Mahek and Pratha are bound to get more information about the Asuras and they will craft ways to exterminate them entirely to save their country.

Are there more enemies along the way to stop Pratha and Mahek from achieving what they want to?

Will Pratha realize her power as a Shesh Naagin; the most powerful of them all?

Get ready to witness the biggest revelation of Naagin 6 and how Pratha became the Sarvashreshth Shesh Naagin while Mahek hold the older position and she was supposed to be the Shesh Naagin.