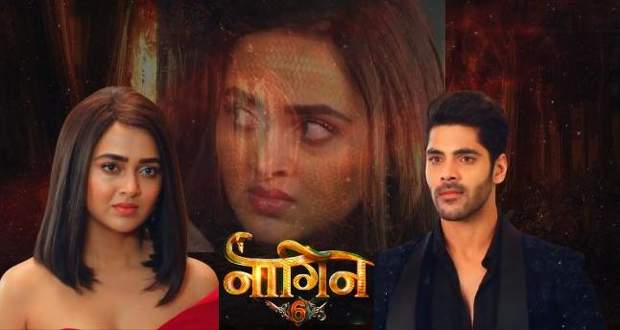 Today's Naagin 6 2nd July 2022 episode starts with Pratha spying on the female doctor at the hospital who informed Pratha about her pregnancy while she was in jail.

However, the doctor accepted the bribe given by Mehek to kill Pratha’s baby.

Pratha Kills The Doctor Who Killed Her Baby

To punish the doctor, Pratha takes Shesh Naagin's form and asks whether the doctor remembers killing a baby of a pregnant baby who was in jail.

With eyes full of anger, Pratha girdles her tail around the doctor and kills her on the spot.

This time, no one can stop Shesh Naagin from punishing people who choose money, lust, and power over life.

Meanwhile, at Gujral Mansion, Urvashi throws a red lehenga choli at Mehek who is preparing to go to sleep.

Mehek gets angry and asks Urvashi why she brought a bright red lehenga in the night.

Urvashi sarcastically says she obviously brought it so Mehek can wear it to meet Shakti.

The mention of Shakti’s name drains all the colours from Mehek’s face when Urvashi reminds her how lovey-dovey she got with him to make Pratha believe that Rishabh was cheating on her with Mehek.

Urvashi tells Mehek to meet Shakti once or otherwise, he will come out in the open and Urvashi can’t let that happen.

On the other hand, Pratha and Rajesh discuss why Urvashi wants to buy the salt land from them.

However, Pratha advises Rajesh to call Urvashi and Mehek tomorrow so she can gauge why they want it so bad.

Upon Urvashi’s request, Mehek does go to meet Shakti wearing the Red Lehenga with a fearful heart.

However, to stop him, Mehek says that she is not the girl Rishabh loves, rather it is someone named Pratha.

This stops Shakti and he decides to go after Pratha as he has an obsession with lusting over girls that like Rishabh.

The next day, Urvashi and Mehek visit Kiara and Rajesh at the salt land and try to strike a deal.

However, Kiara says she will let Rajesh give the land to them only if Mehek teaches Kiara how to do "shikar" or hunting.

Meanwhile, Rishabh stares at Kiara’s photo, trying to figure out whether it is Pratha or not.

Mehek catches him and says he still loves Pratha.

However, Rishabh denies it and says he just wants to know whether Kiara is Pratha.

Mehek then makes Rishabh agree to teach Kiara hunting so he can know himself whether Kiara is Pratha in disguise.

Mehek reveals how she betrayed Pratha to Urvashi

Later, Urvashi and Mehek praise themselves for fooling everyone.

Mehek reveals how she took Samaira’s form and told Rishabh about Pratha having an affair with Inspector Vijay.

At the same moment, Mehek then visited Vijay at the police station and hugged him, taking Pratha’s form momentarily so Rishabh could believe his eyes and Samaira’s words.

At Gujral House, Mehek along with Rehan killed Samaira, and this way the betrayal of Pratha happened in which the main culprits were Urvashi and Mehek.

In the upcoming story of Naagin 6, Pratha will be seeking revenge from the people who killed her baby and the evil people who trouble the good people for greed, money, and lust.

So far in the story of Naagin Season 6 on 2nd July 2022, Pratha has promised Lord Shiva to seek her Inteqaam or revenge from the people who killed her baby that including Rehan, Vihaan, Mehak, Ritesh, and Shakti.

However, Pratha AKA Shesh Naagin thinks that Rishabh killed her baby too as she doesn't know about Rishabh's twin brother named Shakti.

According to the latest spoilers of Naagin 6, Pratha will be coming face-to-face with Rishabh as she plans to kill him.

However, with still deep-seated love beating inside her heart, will Pratha be able to kill Rishabh in a snap of her finger?

Let us see how the interaction between the estranged husband and wife takes place as Rishabh still doesn't know Pratha is alive and Shesh Naagin along with Pratha has no knowledge about Rishabh's twin brother, Shakti.

The future episodes of Naagin 6 are bound to bring an element of excitement and suspense for all the Nagin 6 fans.

© Copyright tellybest.com, 2022, 2023. All Rights Reserved. Unauthorized use and/or duplication of any material from tellybest.com without written permission is strictly prohibited.
Cached Saved on: Wednesday 25th of January 2023 01:51:55 PMCached Disp on: Thursday 9th of February 2023 08:14:58 AM