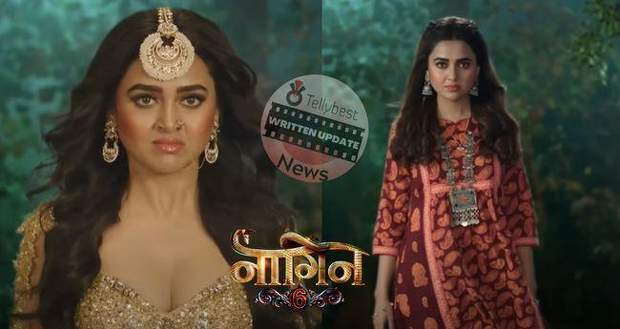 Today's Naagin 6 2nd October 2022 episode starts with Professor Jeet asking Prathna where she is coming from so late in the morning while she lies, saying she went jogging.

On the TV, they both hear the news of a scientist dying while Jeet says he can't stay at home and have to do something.

At Rudra's office, Rudra looks at the reports and says that 21 years ago, a big attack had also happened following a lot of random deaths like now.

Meanwhile, Chief is back who had worked with Mehek and Urvashi in the past and says he didn't die as the bullet slid across his forehead.

Similarly, the professor beats his brain trying to find out the plan of the anti-nationals and what they want to derive out of Bharat.

Rudra also discusses the similarities between the deaths that have happened.

Jeet discovers that the five people who have died were wearing the holy thread and gets impressed when he sees Rudra report the news and says only he can discover the truth of these anti-nationals after Jeet.

Elsewhere, the Chief says he will harm the people of Bharat by launching an attack on Vijaya Dashmi, in Unnati grounds, where people would be playing Dandiya. He says it is an attempt to lure Shesh Nagin.

Pratha refuses Jeet's request to help the people and prays to Lord Shiva to send another Shiv-Vardani to help the troubled.

At Gujral House, Rishabh also informs Pratha that this is a planned attack and gets scared when he comes to know that Anmol is on Unnati grounds too.

At the same time, Prathna gets a call from her fiance, asking her to come to Unnati grounds.

Professor also decides to meet Rudra behind the back while Rudra goes to see Anmol.

Rudra gets angry after Anmol reveals she was joking and says Dandiya is not so important as Bharat being in danger.

However, Rudra patches up with Anmol as she asks him to play Dandiya with him.

Prathna along with Naman (Rudra's colleague and friend) arrive at Unnati grounds and gets greeted by Manav (her fiance).

Prathna says she is here for work but gets bumped into Rudra who has changed into an ethnic Dandiya outfit.

Prathna starts to laugh and says she didn't have clarity on what to do so she came here.

Seconds later, Anmol joins Prathna and says she should change into a new outfit too as she has an extra.

When Prathna introduces Manav as her fiance, Rudra's face falls. His heart flutters when he sees Prathna come all ready and they all play Dandiya together.

Later, Pratha and Rishabh arrive too and ask Anmol if she is okay.

Rishabh gets angry and asks Rudra if whatever he reported on television was accurate or not.

Rudra in turn asks Rishabh if 21 years ago, a pandemic invaded India or not as it is a guarantee that a planned attack is on the way to harm Bharat.

Meanwhile, Anmol tells Pratha she should meet Prathna as she looks the same as her.

On the other hand, the Chief informs his people that 21 years ago, they made Yeti to defeat Shesh Naagin but this time, he has made something better.

Chief is talking about a wild boar who will not fall short in attacking Shesh Naagin.

Meanwhile, a desperate Jeet arrives at Unnati grounds and gets surprised when he sees Pratha with Anmol and realizes he is seeing his biological daughter, Anmol, for the first time.

Suddenly, Pratha hears the roar of a wild boar while Prathna searches for Jeet and is talking with Rudra secretly.

Jeet talks behind a closed door with Rudra and says the next big attack will happen through the temple, not by border or an illness.

All of a sudden the black wild pig sent by the Chief arrives on Unnati grounds and charges at Anmol but Professor saves her.

Professor realizes that this black boar is after Prathna who is Shesh Naagin.

The animal charges at Prathna but she gets saved by Rudra who risks his own life for her.

Anmol along with Manav rushes an injured Rudra to the hospital while Prathna searches for Jeet.

With a log of fire in his hand, Jeet tries to fight him but gets injected with a drug in his spine by a stranger.

Outside, Pratha tells Rishabh she won't let anything bad happen to anyone while Prathna screams after she sees Jeet lying unconscious on the floor.

In the upcoming story of Naagin 6 on 2nd October 2022, Prathna will agree to her engagement with someone else but will also feel a strong urge to explore her Naagin side.

So far in the story of Naagin 6, Professor Jeet lets Prathna know that her mother was also a Nagin. However, he doesn’t tell her that her mother is Pratha, Anmol’s mother.

As per the latest spoilers of Naagin 6, Anmol will get stuck in Unnati grounds as she goes there to attend a Garba night. However, terrorists are planning to launch an attack there and Rudra gets to know this.

According to the future story of Naagin 6, Prathna will eavesdrop on Rudra’s conversation and get ready to surrender herself for Bharat’s service.

However, the terrorist attack is bait to lure the new Shesh Naagin and get her attacked by a wild boar.

On the other hand, Pratha will receive this information through her old enemies and get ready for the first time in 21 years to use her Shesh Nagin powers again.

Let us see how Prathna and Pratha come face-to-face in the battleground to save Anmol in future episodes of Naagin 6.

© Copyright tellybest.com, 2022, 2023. All Rights Reserved. Unauthorized use and/or duplication of any material from tellybest.com without written permission is strictly prohibited.
Cached Saved on: Monday 21st of November 2022 02:47:40 AMCached Disp on: Saturday 10th of December 2022 03:08:41 PM