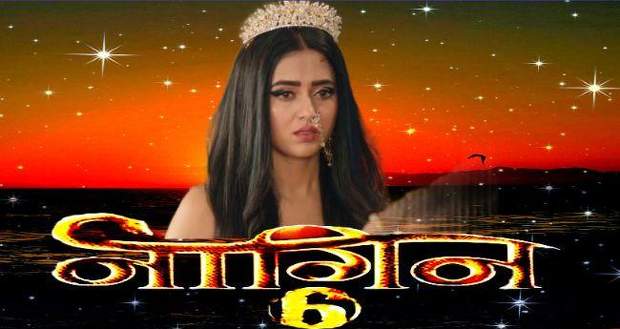 Today's Naagin season 6 30th April 2022 episode starts with Pratha freaking out as Rishabh topples down on the floor when a red arrow hits his neck.

Suddenly remembering the words written in the antique book handed down to her by Farishta, Pratha realizes it's an attack planned by Maha Asura.

Pratha takes all the pain away from Rishabh on her and puts his body on the bed.

Reem and Ritesh team up

On the other hand, Reem and Ritesh team up together to create distance between Pratha and Rishabh.

Reem agreed to marry Ritesh so she can keep an eye on Rishabh and Pratha.

Ritesh teams up with Reem because he has been hurt by Rishabh before.

Rubbing his hand over his neck, Rishabh asks Pratha who hit him in the neck.

Pratha tells Rishabh to rest and not stress.

When Rishabh closes his eyes, Pratha takes the antique book in her hands and opens it.

She carefully reads the words spelled out for her.

Pratha realizes that time is very critical for Rishabh and she needs to protect him at any cost.

The next morning, it is a chirpy atmosphere in the Gujral household.

Seema graciously welcomes the food prepared by Samaira and Reem as they are newlywed brides.

Pratha and Rishabh join everyone at the breakfast table. Both of them are in a playful mood.

Reem pretends to be sweet with Pratha and offers her a sweet to start a new chapter in their lives.

Rishabh is mesmerized by Pratha’s beauty and whispers in her ear.

Rishabh asks Pratha that his house is full of people & Pratha and he needs to spend time alone.

Pratha coughs and Urvashi gets uncomfortable to see the closeness between Pratha and Rishabh.

Rehan announces that he and Samaira are going on their honeymoon.

Urvashi encourages Reem and Ritesh to join the duo.

Seema further encourages Pratha and Rishabh to go on a honeymoon to Dehradun.

Pratha’s mind is full of suspicion as she prepares to go to Dehradun with Rishabh.

When all the couples arrive at the hotel, Reem tells Ritesh that she purposefully picked a room adjacent to Pratha’s room so she can keep an eye on Rishabh.

Pratha walks out of the bathroom and Rishabh looks at her fondly.

Rishabh grins to himself and tells Pratha he needs to go to a pharmacy.

Pratha’s eyes widen as Rishabh hints at her for picking out condoms from the pharmacy.

Seeing his wife’s eyes widen in surprise, Rishabh laughs and changes the topic.

Rishabh tells Pratha that he needs to go to the medical shop to get aspirin. Pratha nods slowly.

Rishabh then tells Pratha that they might have an emergency.

Rishabh utters that since Pratha and Rishabh already love one another, they might as well have sex soon.

Pratha coughs out and Rishabh leaves her playfully to get a special cup of tea and aspirin.

As Rishabh is on his way, he suddenly gets attacked by a rod hitting his head.

Pratha knew something like this was going to occur and she stands behind Rishabh’s fallen body when the Maha Asura turns around.

Pratha follows the running Maha Asura in her snake form.

Pratha realizes that it is Seema who is Maha Asura.

Pratha calls Seema pathetic to kill her son for her ulterior motives.

Seema tells Pratha that she knew she had Naagin as her daughter-in-law.

However, things will change and accelerate very fast now.

Seema laughs at Pratha for not being fast enough to save Rishabh.

However, Mehak already saved Rishabh as Pratha raced behind Seema.

Pratha brings a wounded Rishabh back into Delhi. Samaira, Rehan, Reem, and Ritesh, all accompany them back home.

Seema feigns to be shocked to see Rishabh’s wounded condition.

However, Pratha indirectly tells Seema to keep her emotions at bay since Rishabh made it out alive thankfully.

Pratha keeps an eye on Seema and she catches her mixing poison in Rishabh’s food.

Rishabh walks into the kitchen happily as Seema offers him the ‘Halwa’.

However, Pratha tells Rishabh that he cannot eat the halwa as it has poison mixed in it.

Pratha half-heartedly apologizes to Seema so Rishabh does not think ill of her.

When Rishabh leaves the mother and daughter-in-law duo alone, Seema promises Pratha that she will kill Rishabh under Pratha’s nose and she won’t even know.

Later, Mehak and Pratha have a conversation about the pictorial representation of a group of women in Shesh Naag’s book.

Pratha suspects that the woman standing in front is Seema and if she is Seema, Seema is 90 plus years old now.

Mehak agrees with Pratha and both the sisters make a plan to unearth the secret carried by Seema for years now.

On the other hand, Seema feels giddy since Pratha cannot ever know her secret.

Lalit Gujral hears this and gets slapped by Seema when he asks her not to kill Rishabh.

Seema is the Maha Asura and Lalit is just a pawn in the game for Seema to fulfill her motive.

Lalit tells Seema that Rishabh is her son.

But Seema tells Lalit frankly that she feels no attachment to Rishabh and is devoted only to her goal.

Pratha accompanies Seema to a temple

The next day when Seema is preparing to go to a temple on Thursday morning, Pratha urges Seema to take her and Rishabh too.

Pratha tells Seema she wants to apologize in front of God to accuse Seema yesterday.

Rishabh gets a call from his chief who informs him that the attack Rishabh received in the jewelry store was preplanned.

Seema agrees dejectedly to take Pratha and Rishabh to the temple of Bhairav.

However, when the trio arrives, Pratha realizes that it is Balaji’s Temple and she cannot enter it since she is a Naagin.

Inside Seema’s mind, she has decided to kill Rishabh today only.

Seema is determined to put an end to Rishabh’s life since he is becoming friction in Seema’s way.

Can Pratha find a way to stop Seema from harming Rishabh?

As per the latest promo of Naagin Season 6 on 30th April 2022, Sheshnaagin Pratha is going to confront Maha Asura soon.

The book given by Farishta has deeply hidden secrets regarding the identity of the remaining Asuras.

According to the latest promo of 30.4.2022, Pratha comes face to face with Maha Asura who claims that along with Pratha's Bharat she is also going to destroy Pratha's Rishabh hinting that she will hurt Pratha in every possible way.

As per the gossips of Naagin 6, this Maha Asura is none other than Seema Gujral.

How will Pratha react when she gets to know that a mother who is a creator can also be a destroyer of her son?

However, Seema Gujral is not the real mother of Rishabh as per the upcoming twists of the show Naagin 6.

Let us watch the future episodes of Naagin 6 to know what twists and turns the story unfolds for its die-hard fans.

To get to know more, download Naagin 6 all episodes or watch online today's (30 April 2022) latest full episode, go to voot.com