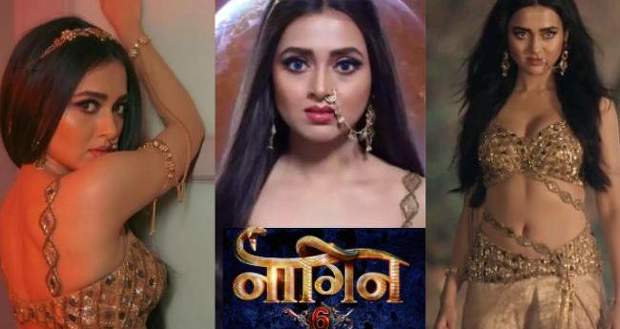 Mehek stands in the corner and realizes that Shakti is heading toward Kiara’s marriage, calling her Deepika.

Meanwhile, Rishabh misses Pratha and wants to say sorry to her. He then says sorry to Kiara, thinking her to be Pratha, making her question why he is suddenly saying sorry to her.

On the other hand, Shakti barges into Pratha’s room while she gets ready.

He grabs her hand forcefully but she slaps him.

This only makes Shakti laugh and he pins her against the wall, saying he is tired of listening to Rishabh’s name over and over again from the girls he likes.

He also reveals to Kiara that he is Shakti, not Rishabh.

He then throws Pratha on the bed while she scoots away.

Shakti says he wants to have sex with her and celebrate their wedding night but Kiara screams “Help!”.

Rishabh hears Kiara’s voice asking for help and stumbles upstairs because he is drunk.

Kiara feels disgusted and hides her face from Shakti but suddenly Urvashi enters the room and hits Shakti on his head, knocking him unconscious.

Shakti falls to the ground while Pratha says he can’t be Rishabh because Rishabh believes in giving, not taking love forcefully.

Urvashi gets confused and looks at Kiara questioningly.

Pratha tries to cover up by laughing and then reveals her true self; it is Mehek who took Kiara’s form to stop Shakti from jeopardizing Rajesh and Kiara’s wedding and giving away his secret.

Mehek also calls a sub-inspector to take Shakti’s body away and instructs Urvashi to keep him distracted while she figures out the way to drag Shakti’s body downstairs.

Rajesh expresses his love toward Kiara but her eyes are locked on Rishabh who watches them from upstairs with tears in his eyes.

Meanwhile, Reem challenges God that if he really exists, he must stop this wedding so she can have her chance with Rajesh.

Pratha sits at the Mandap with Rajesh but with no smile.

Meanwhile, the inspector questions Urvashi where Mehek is.

Mehek brings Shakti’s body with her snake tail, leaving the inspector surprised by her incredible strength being a woman.

Meanwhile, Gauri, Pratha’s Naagin friend, keeps an eye on Rishabh but spots Mehek and Urvashi drag a man who looks exactly like Rishabh.

However, Mehek catches her and transforms into a Naagin, taunting Gauri she is lucky today to be killed by Shesh Naagin.

Gauri is conflicted because if she transforms into an Icchadari Naagin, Mehek would know her truth and she wouldn’t be able, to tell the truth about Rishabh’s innocence to Pratha.

Mehek attacks Gauri on her neck and she pretends to die.

The sub-inspector sees the whole scene and asks for a heft bribe from Mehek and Urvashi to keep his mouth shut.

Pratha waits for Gauri and when Gauri arrives, smoke emanates from the Mandap and Pratha escapes, making Gauri sit in her place.

Pratha goes inside Rishabh’s room while he drinks alcohol and stares at Pratha’s photograph in his wallet.

Rishabh addresses Pratha as Kiara and says he has no will to live because he wants to reunite with his love.

Kiara says she will fulfill Rishabh’s wish and grabs a knife to kill him.

However, she is not able to kill him and breaks down in tears. Pratha admits she is not strong enough to kill Rishabh but he already killed her love and their baby.

Pratha throws the knife away and leaves while Rishabh stumbles against the curtain.

His back shakes a table, making a lit candle fall on the floor with the curtain catching fire immediately.

Pratha returns to the Mandap but Mehek stops her, asking where she went.

Kiara lies and says she is allergic to smoke while the Pandit continues the ritual.

However, he gets caught up in the fire.

One of the guests notices the fire emerging from upstairs and everyone rushes to put the fire out.

On the other hand, it was not Pratha who sat at the Mandap but Gauri who feels weak and collapses on the floor.

Pratha apologizes as Gauri breathes her last and reveals that Rishabh is innocent.

In the upcoming story of Naagin 6 on 30th July 2022, Pratha will find herself at a juncture where she has to decide whether she still loves Rishabh or not.

So far in the story of Naagin 6, Pratha is taunted by Rajesh Pratap Singh for not being able to kill Rishabh because she still loves him.

Rajesh Pratap Singh has also asked for Pratha's hand in marriage so he can get his dead wife's ancestral property. However, their marriage will be totally fake as per the upcoming twists of Nagin 6.

As per the latest spoiler of Nagin 6, Pratha is all ready to use the flames of betrayal she experienced when Mehek betrayed Pratha.

Pratha will get reminded of those burning flames of betrayal while sitting with Rajesh Pratap Singh by watching the Mandap flame burn in front of her.

Let us see what Naagin brings to the viewers as Pratha braces herself to kill Rishabh and seek justice for her baby that was killed before it could even see the daylight in the future episodes of Nagin 6.

© Copyright tellybest.com, 2020, 2021. All Rights Reserved. Unauthorized use and/or duplication of any material from tellybest.com without written permission is strictly prohibited.
Cached Saved on: Monday 1st of August 2022 11:42:47 PMCached Disp on: Tuesday 16th of August 2022 03:02:30 AM