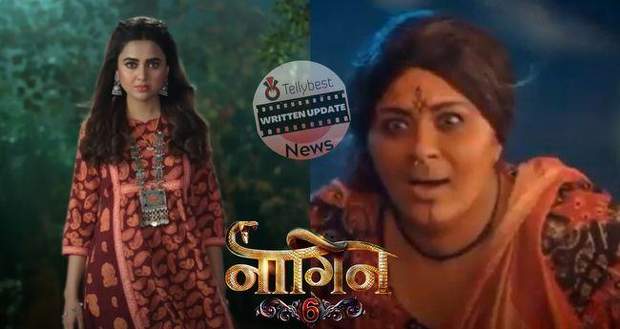 Today's Naagin 6 30th October 2022 episode starts with Mayuri introducing herself to Pratha who thinks she is still Shesh Naagin.

Mayuri says she is Naagin’s biggest enemy and announces she will be the knife of Pratha’s death.

With angry eyes, Pratha starts to beat Mayuri with her tail. However, Mayuri turns into a peacock and hurts Pratha’s neck and arm with her beak.

Pratha's neck starts to bleed but she gets saved by Prathna who comes out to fight Mayuri.

Prathna transforms herself into Shesh Naagin and defeats Mayuri entirely while Pratha lies on the ground.

Prathna's secret is revealed to Pratha!

She stands up and asks the Naagin to reveal her true self and Prathna turns around, shocking Pratha immensely.

Naag Mani shines in Prathna's belly as Pratha asks her daughter how did she become Shesh Naagin.

Prathna sarcastically replies she became a Shesh Naagin just like Pratha did when she got reminded of her responsibilities.

However, Prathna doesn't answer Pratha when she asks her reason for marrying Rudra, the guy Anmol loved.

Meanwhile, Mayuri gains strength and starts to hurt Rishabh but Pratha saves him by grabbing Mayuri by her tail.

Rishabh gets stunned to see Pratha in this avatar but he gets knocked out soon due to his wounds.

On the other hand, Pratha goes to the Naag Mahal and looks at her Nani's photo painfully, asking why Lord Shiva give her this life where she couldn't be an honest mother or a wife.

Pratha is worried about enmity brewing between both her daughters Prathna & Anmol as she hesitates to go back to Gujral Mansion & meet Rishabh's eyes.

Although, Pratha has to go since it is Diwali and Anmol has organized a party.

When she enters, Anmol stops her from entering immediately, making Pratha think that Rishabh told everyone.

However, Anmol stops Pratha since she was about to step on a Rangoli. Meanwhile, Prathna exchanges some knowing looks with Pratha while Anmol spies on Rudra who is watching Prathna very lovingly.

Anmol's friend taunts her that Rudra never looked at her this way but Anmol knows how to lure him toward her.

Later, Pratha goes upstairs and is confronted by Rishabh who asks her why she did not tell him this big secret in the last twenty-three years.

Their conversation is cut short as Chanda Ma appears and consoles Pratha about Anmol's situation.

Before the Diwali Pooja, both Rudra and Prathna get ready while he fills her forehead with 'sindoor' or vermillion as it keeps the couple intact.

Prathna huffs in annoyance and leaves but her dupatta gets stuck in the cupboard. She tells Rudra to drop it and he laughs, asking her to look back at who is holding what.

Downstairs, during the Diwali Pooja, Prathna goes outside to keep the diyas while Pratha stops her.

Pratha gets angry when Prathna doesn't listen to her and states she is her mother sternly.

However, Prathna tells Pratha that she is the one who is blinded by Rishabh's love and who tried to kill Jeet.

Pratha tries to remove this misunderstanding from Prathna's mind by saying if Rishabh was an anti-national, he wouldn't have the big heart to still let Rudra marry Prathna by hurting Anmol's heart.

Prathna doesn't agree and wants Pratha she will make Rishabh meet his death no matter what it takes and that is why she is here.

Pratha begs Prathna to open her eyes but Prathna is firm in her opinion and asks Pratha if she ever knows the pain of losing someone like her father.

A flashback of Pratha killing her father appears in her mind instantly but she says she won't let a single scratch come near Rishabh.

Inside Gujral Mansion, Anmol keeps getting jealous seeing Rudra & Prathna together and goes to mix something in orange juice.

She states that she will get everything back as it was snatched from her and this is just a beginning of a new saga.

On the other hand, Zain goes to his men and celebrates by doing cheers since Rudra's father is his partner-in-crime & the new Shesh Naagin is his daughter-in-law.

In the upcoming story of Naagin 6 on 30th October 2022, Pratha realizes that she is no more a Shesh Naagin!

So far in the story of Naagin 6, Zain comes to the Vasuki Shesh Mandir to take revenge on Shesh Naagin Pratha.

However, neither he nor Pratha knows that she is no more a Shesh Naagin.

According to the latest spoilers of Naagin 6, Prathna attacks Rishabh near the ancient temple that Pratha witnesses.

Pratha asks Prathna to open her eyes as Rishabh is not Jeet's killer.

However, Prathna says she will just burn Rishabh into ashes.

As per the serial gossip of Nagin 6, Pratha worries whether Prathna gets consumed by her own anger.

Let us see whether Prathna's misunderstanding gets cleared or not or whether she takes Rishabh's life and later regrets it in future episodes of Naagin 6.

To get to know more, download Naagin season 6 episode 76 or all episodes or watch the online full-show episode 76 of Naagin 6, go to the Voot app.

© Copyright tellybest.com, 2022, 2023. All Rights Reserved. Unauthorized use and/or duplication of any material from tellybest.com without written permission is strictly prohibited.
Cached Saved on: Monday 21st of November 2022 01:13:21 AMCached Disp on: Friday 9th of December 2022 05:44:05 AM