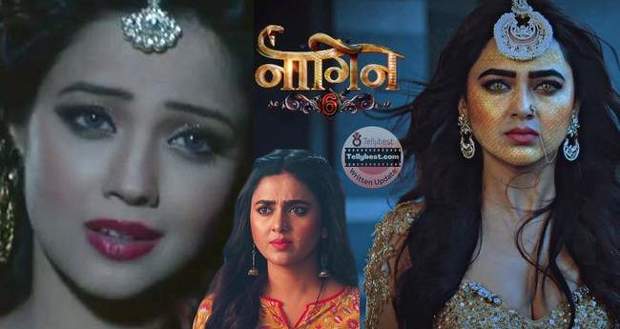 Today's Naagin 6 31st December 2022 episode starts with Seema waiting for Meheck to arrive while Meheck gives her a surprise by bringing Sonya and an unknown guy (Gautam), followed by Prarthana and Raghuvanshi.

Seema internally says that Meheck somehow found Prarthana while she watches Prarthana show no kind of aversion to her or Mehek.

Vinay thanks Mehek for bringing back Sonya and happily marries her off to Gautam who is Preeti's foster sibling.

During the wedding rituals, Seema whispers to Meheck, asking her how did she find Prarthana and why doesn't show any reaction.

Meheck says she will tell her the whole story later.

After the wedding is over, Sonya and Gautam take everyone's blessings while Meheck goes over to Preeti and hands her a Ladoo to eat since she is practically Sonya's sister-in-law.

Meheck has infused her poison into the Ladoo so if Preeti eats up and dies, that means she is a normal human being.

However, if she is a Naagin like she expects Prarthana to be, nothing would happen to her.

As soon as Preeti lifts the Ladoo to her mouth to eat, a child crashes into her and the whole plate of Ladoos falls on the floor, making Meheck angry.

Raghuveer saves Prarthana from falling while Meheck is questioned by Seema upstairs.

In the room, Seema holds Meheck's train of Saree, tugging on it and saying she is feeling anxious and would like to know the mystery behind this Prarthana's doppelganger.

Meheck says Prarthana is playing a game with them of not remembering anything but Seema has a brilliant idea and she whispers it to Meheck.

Later, Meheck asks Preeti to light up a lamp in the jungle near Ahlawat's Kul Devta tree.

Preeti simply follows Meheck's instructions and goes there, however, Seema is ready with a troop of snake charmers positioned there strategically.

She asks all of them to play their flute since a Naagin will come there.

Both Seema & Meheck hide behind a tree while Preeti comes there and bends down to light the lamp near the tree's foot.

However, her skin turns golden when the bunch of snake charmers surrounds her and she turns into Shesh Naagin.

Meheck also starts to sway to the music, making Seema ask her to stop dancing.

They both see the nine naag manis on each hood of Shesh Naagin while Prarthana in her grand form grapples each of the snake charmers and makes them unconscious.

However, one of them escapes and throws a net at Prarthana who is still in snake form.

Back at Ahlawat Mansion, Raghuveer gets to know from Preeti's siblings that Meheck has sent her to the jungle and he goes to search for her.

Meheck gets angry when she sees Raghu there as he releases the poor snake (Prarthana) stuck under the net.

He later finds Preeti unconscious on the ground who reveals she doesn't remember anything.

Later that night, Meheck goes to Preeti's room and hypnotizes her with the help of the magical anklet.

Preeti under hypnosis says that she doesn't know who she is or her past.

In the morning, Meheck urges Preeti to stay one more day along with Raghuveer.

While Meheck and Seema are seen making fun of Prarthana since she doesn't remember anything now and is a fool, Preeti roams around in the Gujral House.

Her head hurts as several painful flashbacks float in her mind. Ms. Thakral whose son was to marry Sonya makes a scene and threatens Vinay of pulling out the money for the deal they made.

However, Raghuveer steps forward and says he will do whatever he can to save his family business and volunteers to marry her daughter, Ananya.

Preeti gets shocked by Raghuveer's decision who is seen playing the guitar in his room, singing "Lag Ja Gale".

Preeti's eyes fill with tears to see his emotion spring up in the song.

When she goes in front of him, Raghuveer abruptly confesses that he loves Preeti.

Raghuveer says that maybe, Preeti is not destined in his life and asks for her hand to dance for the last time.

Preeti obliges as she hugs him and dances along so these memories are etched onto Raghu's heart forever.

In the upcoming story of Naagin 6 on 31st December 2022, Meheck will bring Gautam and Sonya and get them married herself.

So far in the story of Nagin 6, Raghu's truth of being the co-owner of the Ahlawat jewelry business comes in front of Prarthana, AKA Preeti.

Meanwhile, the daughter of Smriti Thakral, Ananya, is keen to marry Raghuveer.

As per the latest spoiler of Naagin 6, Raghuveer will accept Ananya's marriage proposal on blurry conditions, making Preeti feel hurt.

Later, Meheck will order Preeti to go and light a lamp under a Peepal tree, saying it is where their ancestors' deities are kept.

This way, Meheck wants to find out whether Preeti is Prarthana or not.

Further, according to the upcoming big twist of Naagin 6, Shesha (played by Adaa Khan) will also make her cameo and help Preeti remember her past to fight against Meheck.

Let us see how Preeti and Raghuveer's marriage happens instead of Ananya's in the future episodes of Naagin 6.

© Copyright tellybest.com, 2022, 2023. All Rights Reserved. Unauthorized use and/or duplication of any material from tellybest.com without written permission is strictly prohibited.
Cached Saved on: Wednesday 25th of January 2023 01:18:20 PMCached Disp on: Tuesday 31st of January 2023 06:56:20 PM