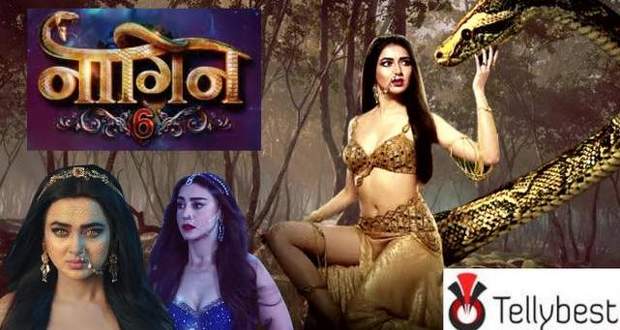 Pratha watches helplessly as Rishabh’s body is carried out of the Gujral Mansion with a white cloth covering it.

With tears inside her eyes, Pratha tries to escape but Divya stops her and says she cannot see a dead body until she and Rajesh complete their wedding rituals.

Inspector Vijay confirms with Mehek and Urvashi at the police station that it is indeed Rishabh who died in the fire.

However, when Mehek returns home, Urvashi taunts her saying why she looks so emotional when she did not love Rishabh.

Mehek stays motionless while Urvashi adds it is good that Rishabh died, otherwise one day or the other he would have known that Pratha did not actually betray him but got tangled in a web of lies crafted by Urvashi and Mehek.

Mehek opens her lips to speak but no words come out.

Seeing this, Urvashi gets worried and asks herself why Mehek has become emotional so suddenly.

Urvashi’s point is that Rishabh could never love Mehek like the way he loved Pratha because Pratha’s love had a mad sense of devotion so Mehek need not get emotional.

However, Urvashi does not know she is talking to Pratha in disguise as Mehek.

After Pratha hears this, she goes into her room screaming and crying.

Rajesh Pratap Singh says Pratha got what she wanted which was Rishabh’s death.

However, Pratha screams and tells him Rishabh never betrayed her.

It was the pair of two evil women, Mehek and Urvashi, who lit their relationship up on fire that resulted in Rishabh’s death.

Later, Divya asks Rajesh why he is drinking and upset when his marriage with Pratha is fake.

Meanwhile, Mehek pretends to cry along with other Gujral members except for Rishabh’s sisters, Chanda, and Lalit.

On the other hand, Urvashi locks Shakti inside the storeroom again and tells him if his name is Shakti, Urvashi has got more Shakti (strength) than him.

After Urvashi leaves, Shakti peeps at Pratha and busts his hand on the wall as he watches her come inside.

Meanwhile, Mehek asks Urvashi how long she has to keep crying.

Urvashi gets surprised at Mehek’s irritation because, for Urvashi, Mehek was emotional a while ago.

Urvashi then asks Mehek to see Ritesh who is eating chips secretly and not even sorry for Rishabh’s death.

Reem also asks for chips from Ritesh but Ritesh says only he can eat chips because he is sad and when he is sad, he gets hungry.

Reem and Ritesh both start eating chips while Rehan worries since Vihaan is not picking up his phone.

When Divya asks Rehan if he is feeling sorry for his brother’s death, he says he wishes he could have died instead in Rishabh’s place.

Divya then tests Rehan and mentions it is 11:11 AM and whatever someone wishes for at this house gets true.

Rajesh and Pratha pay their due condolences while Mehek is busy putting a lipstick to talk to the media about Rishabh’s death.

Just then, a random woman hugs Mehek and whispers that Shesh Naagin has to be present at the Naag Mahal on Naag Panchami.

However, Lalit asks Mehek to be present for Maha Mrityunjaya Path for Rishabh but she denies it.

Since Mehek won’t be present, Pratha promises herself to pay her duty as Rishabh’s wife in disguise of Mehek.

Rehan and Ritesh then tease Mehek about the approaching Naag Panchami and says it must be party time for her Naagin Bhabhi.

Mehek rolls her eyes and playfully threatens to kill them with her poison since Rishabh is no more alive to protect them.

Urvashi gets confused when she sees Mehek get ready when she should look as if she is mourning.

Mehek then informs Urvashi that she has to present at Naag Mahal to welcome Takshaka Naag, the king of Nagas, who will grant any wish of Shesh Naagin on Naag Panchami.

Mehek goes to Naag Mahal and invokes Lord Shiva’s grace but as soon as she touches the door to welcome Takshaka, she gets electrified as if Shiva is not allowing her to open the door.

She then doubts if she is Shesh Naagin anymore or not.

On the other hand, Pratha pays her due respect and attends the Maha Mrityunjaya ritual in disguise of Mehek so Rishabh’s soul gets peace.

She also promises to die after she punishes Mehek and Urvashi.

After the ritual, Pratha walks barefoot in a white saree and begins Taandav to welcome Takshaka so she can ask for Rishabh’s arrival back on Earth and get more strength to finish phony people like Mehek and Urvashi who can’t ever be trusted.

In the upcoming story of Naagin 6 on 31st July 2022, Rishabh will get stuck in the fire while he goes inside his room to fetch the only photograph he has of Pratha.

So far in the story of Naagin 6, Pratha along with her Naagin friend Gauri crafted a plan to kill Rishabh.

However, Pratha wasn't able to kill Rishabh because she still holds feelings for him.

Meanwhile, Gauri discovered that Rishabh is innocent after she watched Mehek & Urvashi drag Shakti's body away.

According to the latest spoiler of Nagin 6, Gauri will tell Pratha that Rishabh is innocent and Mehek and Urvashi are the real perpetrators of her baby.

At the same time, Rishabh will succumb to the injuries while Pratha cries for his death as per the upcoming twists in Naagin 6.

Let us see what this next chapter of Naagin 6 holds for our beloved #PraRish and their love story that is still unfinished in the future episodes of Nagin 6.

© Copyright tellybest.com, 2020, 2021. All Rights Reserved. Unauthorized use and/or duplication of any material from tellybest.com without written permission is strictly prohibited.
Cached Saved on: Wednesday 3rd of August 2022 12:53:24 AMCached Disp on: Tuesday 16th of August 2022 02:43:31 AM