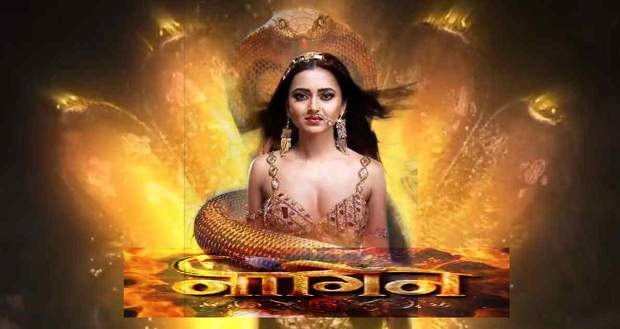 Today's Naagin 6 3rd April 2022 episode starts with Shalakha asking Pratha about the night when she became the Shesh Naagin and the secret of the Nilgiri mountains.

Later, Mehak tells the truth behind the day when Pratha became the Shesh Naagin instead of Mahek.

Pratha gets traumatized when Mehak starts to explain the day of Pratha's crowning, and stops her to speak more about it.

Shalakha and Mehak plan to take Pratha to her old palace that is in the ground behind the Nilgiri mountains.

Pratha arrives at the Nilgiri palace, where Shalakha and Mehak arrive with the herbs that would heal Pratha from the Yamuna's poison.

Later, Mahek explains about the night which was heavy for the sisters.

The secret behind the Nilgiri Palace and Pratha’s crowning

Years ago Mehak completes her austerity after years of offerings to Lord Shiva and was ready to be a Shesh Naagin.

But something unexpected happens as some goons attack the Nilgiri Palace and kill Pratha's family.

As soon as the moonlight strikes on the milk-filled saucer, the potential Shesh Naagin had to drink it immediately before the mahurat.

The goons attacked Mehak which prevented her from drinking the milk.

Due to limited astrological timing, Pratha had to drink the blessed milk and became the Shesh Naagin by the blessings of Lord Shiva.

Pratha became the accidental Shesh Naagin while her house burns down.

Mehak and Pratha move away from the Nilgiri Palace while Pratha takes an oath to never return to this palace.

Mehak and Pratha were summoned by Professor from the Naaglok to save the country.

Shalakha gets blessed by Pratha

Pratha and Shalakha apply the ubtan to heal Pratha.

Later, Shalakha feels guilty for her wrongdoings and pleads for an apology.

Sheshnaagin Pratha gives Shalakha a blessing and announces her to be a part of the Naagin clan.

Shalakha expresses her gratitude towards Pratha and leaves.

The other day, Rishabh saves Pratha from falling as planned by Mehak and Pratha and the doctor declares that Pratha is not pregnant.

On finding out that Pratha was not pregnant Rishabh tries to be caring toward his wife and asks her the reason for not telling the truth to everyone.

Meanwhile, Pratha says she was testing his love but failed miserably, as Rishabh didn't have faith in Pratha and suspected her character instead.

Mehak finds out the clue and is on the hunt for Riya's murderer.

On the other hand, Mehak finds out that the string belonged to Vihaan's hoodie.

After Vihaan's Roka ceremony, the family plays antakshari where Rishabh expresses his apology in a form of a song.

Later, Pratha expresses her love for Rishabh through a beautiful song.

Meanwhile, Mehak stains Vihaan's jacket and plans to punish him for Riya's murder with Pratha.

As soon as Vihaan reaches for his jacket, Pratha plans to kill Vihaan in her Shesh naagin avtaar. Meanwhile, Rishabh arrives in the room and sees Pratha in her Naagin form.

As per the latest spoiler reveal of Naagin Season 6, 3rd April 2022, the viewers will get to know the mystery of the night that changed Pratha’s life completely.

According to the spoiler, what happened the night when Pratha became Sarvashreshth Naagin will come to light fully.

Pratha who was an innocent girl with a normal life is now living the life of Shesh Naagin.

The upcoming episode is going to answer all the secrecy and questions revolving around Pratha’s transformation into Shesh Naagin.

Furthermore, according to the latest spoilers of Naagin 6, Pratha will also get to know her past life when she goes near the Nilgiris.

Why did Pratha become Sarvashreshth Shesh Naagin instead of Mahek?

Let us wait in anticipation to know about Pratha’s past life and the secret that made Lord Shiva choose Pratha to be the Sarvashreshth Naagin.

Today's Naagin 6 3rd April 2022 episode starts with Rishabh getting stunned and craving to know all about Pratha he can.