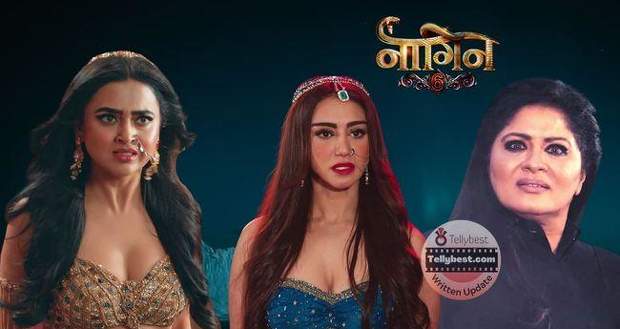 Today's Naagin 6 3rd December 2022 episode starts with Seema telling Pratha that if she kills her right now, she wouldn't know where Rishabh is and he will die as well.

Pratha stops as Seema blackmails her into giving the "Divya Shakti" Anklets that are made of Lord Shiva's Ghungroo.

Prarthana urges Pratha to give them to Seema while also reminding Pratha that Seema cannot invoke Singhika without Anmol's presence.

Anmol & Urvashi are trapped by Ritvik, but they come into the cave, much to Pratha & Prathna's surprise.

A flashback is shown where Urvashi & Anmol cut their ropes with the glass cut out and hurt Ritvik's head not once but twice with a rod.

Anmol happily takes the anklet from Seema and puts it around Singhika's feet while adding the Naag Mani in her third eye.

Pratha & Prathna watch helplessly but Seema gets confused as to why Anmol is still not getting powers through Singhika.

Rishabh Gujral makes a sudden entry and holds the real Nag Mani in his hand, announcing that this will go into the right hand only which is of Shesh Naagin.

He throws it in the air toward Prathna but Anmol pushes her.

Anmol attacks Prathna'a back with a big knife that renders her bloodied on the ground.

Pratha catches it and gets angry at Anmol, and girdles her snake tail around her.

Anmol gets scared and emotionally weakens Pratha, saying she cannot hurt her daughter.

Singhika'a idol begins to glow as Anmol awaits all the powers to be transferred to her.

However, Prathna gets up from the spot and stands in front of the idol as the powers of all nine Nag Mani get transferred to her.

Prathna dwindles as the force of the "Shakti" is too much to handle & Pratha worries whether Prathna can handle it or not.

Anmol touches Prathna's burning body in jealousy but gets burnt in return and dies.

Meanwhile, Seema takes the anklets and flees away with Urvashi to awaken a dead Naagin who has been Pratha's blood enemy.

On the other hand, Prarthana urges both her parents to go away as she burns alone.

However, Rishabh and Pratha do not leave Prathna alone and instead envelop her in a hug, ready to accept even death together.

A miracle happens when they find themselves in the ancient Nag Mahal with King Takshaka.

He reveals to Pratha that he saved her while Pratha has to invoke the 9 serpents whose powers now reside in Prathna.

The serpents bless Prathna as she comes awake and becomes Maha Shesh Naagin.

Meanwhile, Seema and Urvashi are in a cold place.

Seema places the ankles on an ice block and Mehek emerges out of it after twenty years.

Seeing Mehak, Urvashi says she didn't know she would meet her again while Mehek taunts them, saying they both look old now.

At Gujral Mansion, Sayali threatens Prathna to kill Rudra but Prathna becomes Naagin to stop her.

Rudra sees this and gets angry at Prathna for killing his parents but Rishabh and Pratha tell Rudra the truth of the story.

Rudra gets remorseful and accepts Prathna again as his wife.

Meanwhile, Mehek goes to the Nag Mahal to mock her Nani's picture, saying she is back.

Later, Pratha reminisces about Anmol but Rishabh asks her to forget and move on.

Suddenly, a storm emerges and a blue snake bites one couple.

Pratha and Rishabh do not see it but Pratha hears Mehek's voice and gets panicked.

Later, Pratha realises that Nageshwari's anklets are missing but does not tell Prathna about it as she is happy and about to get married to Rudra again.

In the upcoming story of Naagin 6 on 3rd December 2022, Prarthna & Pratha are faced again with their old enemies.

So far in the story of Naagin 6, Patali dies but Seema Gujral makes her entry and reveals herself to Pratha.

According to the latest spoiler of Naagin 6, Mahek is also back and emerges from the iceberg.

Pratha and Prathna will have to make yet another sacrifice to slay their old enemies but how?

As per the upcoming twist of Naagin 6, Rishabh will also get trapped due to Seema who would not let him escape.

How will Pratha & Prathna handle all these enemies while trying to save a nation that gets an evil eye every time?

Let us see what Mahek has in store for Pratha & her daughter whom she tried to kill in future episodes of Naagin 6.