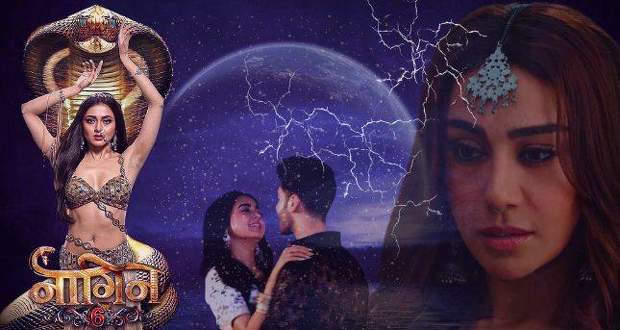 Today's Naagin 6 3rd July 2022 episode starts with Mehek continuing her conversation with Urvashi about how she fooled Rishabh into believing that Pratha was having an affair with Inspector Vijay.

This way, Rishabh testified against Pratha in court and sided with Mehek.

Urvashi also reveals how she manipulated Rishabh into marrying Mehek.

Rishabh took sympathy when Mehek cried saying she has no one else in this world to depend upon but Rishabh was clear that he could never fall in love with Mehek.

The next day, Rajesh Pratap Singh, Kiara, Mehek, and Rishabh get ready to go on Shikar.

During the ride to the forest, Mehek tries to get close to Rishabh in order to elicit a reaction from Kiara.

However, Pratha in return flirts back with Rajesh, making Rishabh uncomfortable.

On the other hand, Rehan tries to get closer to Divya, Rajesh Pratap Singh’s sister because she is rich.

However, this makes Riya mad and Rehan leaves her in the middle of the forest as he races after an uninterested Divya.

Meanwhile, Rishabh teaches Kiara how to do hunting and gets closer to her.

This makes Pratha feel warmth in her stomach, as she still holds feelings for Rishabh.

Seeing Rishabh get closer to Kiara, Mehek gets jealous and Urvashi taunts her over this.

However, Mehek gets a brilliant idea to make a wild boar drink alcohol so she can see whether Kiara is Pratha or not.

The wild boar roars loud and gets mad and charges toward Rishabh, hurting him in the abdomen.

However, Pratha is also aware that Mehek is secretly watching her and prays to Lord Shiva to show her a way.

Suddenly, a stand storm starts making Mehek close her eyes while Pratha transforms into her Shesh Naagin avatar and beats the boar.

When the storm ends, Mehek finds Rishabh unconscious on the ground and Kiara on the other side of the ground.

However, when the boar charges toward Kiara, Rajesh Pratap shoots it.

Kiara has no answer and Rajesh reveals that she is still in love with Rishabh.

However, Pratha denies his claim and says she will kill Rishabh himself.

On the other hand, Rishabh gets a nightmare seeing Kiara gets attacked by the boar.

He wakes up with a scream as Mehek says Rishabh is trying to find Pratha in Kiara's face.

The next day, Urvashi gets frustrated when Zain calls her to ask whether the salt land deal got confirmed or not.

Downstairs, Rishabh scolds Rehan for proposing to Divya who is Rajesh’s younger sister.

Riya delivers a tight slap onto Rehan’s face along with Rishabh who asks Rehan how he could move on so fast when it hasn’t been a year since Samaira’s death.

However, it is a surprise for Rishabh and Urvashi when Rajesh Pratap gives his consent to Divya to marry Rehan.

None of the Gujral Family members know that Divya and Rajesh are helping Pratha in disguise of Kiara to seek revenge from the killers of her baby.

As Jwala helped Pratha, Divya also wants to help Pratha to deliver a criminal like Rehan to jail.

That is why she agrees to marry Rehan because he is already lusting after her money.

In the upcoming story of Naagin Season 6 on 3rd July 2022, Rishabh will be teaching Kiara how to hunt wild animals.

So far in the story of Nagin 6, Pratha has returned to the Gujral Mansion as Rajesh Pratap Singh's NRI fiance named Kiara Sharma.

However, neither Urvashi, Mehek, nor Rishabh knows it is Pratha in disguise.

Mehek still believes she is Shesh Naagin but the real Sarvasrestha power only lies with Pratha.

According to the latest spoilers of Naagin 6, Mehek will be attracting a wild boar to charge toward Rishabh to test whether Kiara is Pratha or not.

On top of that, Pratha will also feel weird sensations in her stomach when Rishabh will be teaching her how to hunt down a "Shikhar" or prey.

The viewers are in for a blown package that will include romance, nostalgia, and the biggest revelation ever seen on television in the future episodes of Naagin 6.

Let us see how Pratha deals with these weird sensations she still feels for Rishabh and how shocked Mehek becomes when she realizes she is no more a Shesh Naagin as per the upcoming twists of Naagin 6.