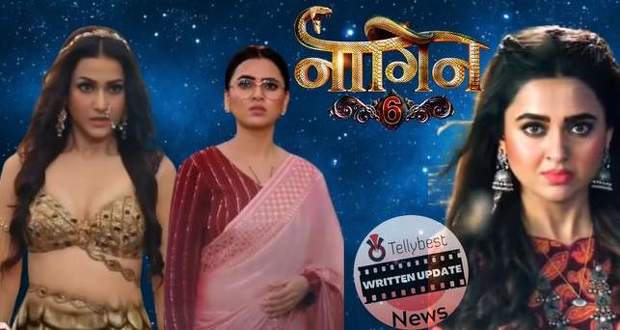 Today's Naagin 6 3rd September 2022 episode starts with Shakti ordering the lady in red to throw both the baby girls while Pratha runs madly in the storm to find her baby girl.

Suddenly, Pratha transforms herself into Shesh Naagin and prays to Lord Shiva to help her find her baby girl.

Shakti gets shocked beside the Professor when he sees Pratha in this avatar while Pratha sees a trail of flowers and follows it.

Soon enough, Pratha sees the lady throw both the babies off the cliff and saves them one by one by grabbing them in her snake mouth.

Professor thanks Pratha for saving both the babies while Pratha gets emotional.

When Pratha questions the lady why she did this, Shakti grabs the lady's mouth and pushes her off the cliff so his name is not disclosed.

Pratha gets her baby girl back!

Pratha goes home and celebrates Krishna Janmashtami with the whole Gujral Family along with Professor and his baby girls.

Shakti glares at the baby girl when Pratha gives her all the attention and celebrates Janmashtami.

However, as soon as Professor is about to step out of the Gujral House, he suddenly turns around and says how can he separate Yashoda from her baby, Kanha.

Professor comes near Pratha and informs her that Krishna Janmashtami was the day Baby Krishna got separated from his real mother, Devaki.

However, Pratha doesn’t have to become Devaki since this Janmashtami she will bear the opportunity to become both Devaki and Yashoda.

After Professor leaves with Anmol, Pratha devotes all to her baby girl but she doesn’t stop crying.

Pratha's baby to be the next Shesh Naagin?

Pratha smiles as she looks at her Nani’s photograph hung on the wall and says she will make her baby wear the anklets worn by Rajeshwari.

However, the weather takes a bad turn and strong winds blow while Pratha’s baby resists wearing the anklets.

Meanwhile, the Professor is on his way to catch his bus but his baby, Anmol, starts crying all of a sudden.

The bus gets delayed for the Professor while he struggles to calm Anmol down.

Pratha asks Chanda if she is lacking any mother qualities within herself.

Chanda relives Pratha of this burden and says Pratha is the perfect mother.

Pratha then takes her baby girl to sleep in the cradle while Shakti burns in jealousy to see the baby snatch Pratha’s attention away from him.

He decides he needs to do something to the baby and goes to taunt Rishabh about it.

Shakti says his Pratha has been snatched away by Rishabh’s baby while Rishabh gets shocked to know that his baby girl has been found.

Rishabh tells Shakti he will never be able to make Pratha his while Shakti gets an idea and announces he wants to marry Pratha.

Just then, the Professor comes to the Gujral House and makes both the babies meet.

Miraculously, these two-stop crying, and Pratha asks the Professor to stay for a day.

Shakti proposes to Pratha, asking her ‘Will you marry me’, and she says yes.

The next day, Shakti beats the drums himself while his and Pratha’s wedding preparations are being done.

However, the baby starts crying and takes Pratha’s attention away from Shakti.

Pratha looks up at the first floor and feels someone is calling her.

Meanwhile, Rishabh is trying his best to come out of the storeroom.

He secretly retrieved the store room’s key from Shakti’s room when they both tussled with each other.

On the other hand, Pratha and Shakti are ready to marry each other and take ‘pheras’.

However, Pratha feels there is something wrong with Rishabh and stops taking pheras.

She asks Shakti ‘Who are you?’ making him nervously laugh and say, ‘I am Rishabh’.

Just then, Rishabh emerges and everyone gets shocked. Shakti’s truth emerges and Chanda is shocked to see both her sons alive.

Pratha threatens Shakti that it is game over for him but Shakti grabs Pratha and Rishabh’s baby and tells both of them to stay away, otherwise he will kill her.

In the upcoming story of Naagin 6, a generational leap of twenty-one years will be showcased where Pratha is an old lady now and has two daughters.

So far in the story of Nagin 6, after reuniting with each other, Pratha and Rishabh reunite with their baby girl who is found with the Professor.

However, as per the latest spoiler of Naagin 6, Pratha doesn't want her daughter to become the next Sarvasrestha Naagin and has a nightmare about it.

In the nightmare, Pratha dreams about her daughter transforming into Shesh Naagin in front of many people and that scares her.

According to the tellybest upcoming twists of Naagin 6, Pratha's daughter has to be the next Shesh Naagin as per her destiny.

Let us see what this next chapter brings for the viewers watching this hit TV live every weekend in the future episodes of Naagin 6.

© Copyright tellybest.com, 2020, 2021. All Rights Reserved. Unauthorized use and/or duplication of any material from tellybest.com without written permission is strictly prohibited.
Cached Saved on: Saturday 1st of October 2022 09:19:26 PMCached Disp on: Wednesday 5th of October 2022 06:47:13 PM