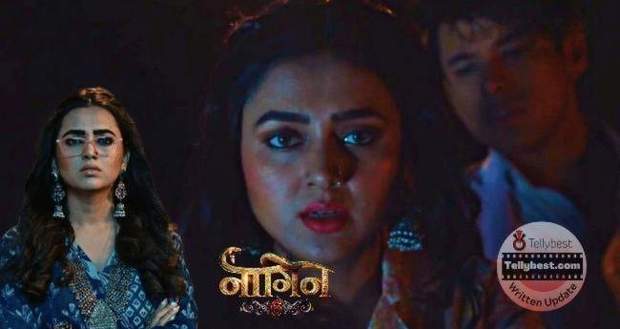 Today's Naagin 6 4th December 2022 episode starts with Pratha getting anxious as she thinks Mahek is back and she goes to Nag Mahal but doesn't find her there.

Outside Gujral Mansion, Pratha finds Rishabh lying on the ground & asking for help.

She rushes to help him and screams and cries.

However, the real Rishabh comes to her and says he is right here while she hugs him tightly.

Rishabh goes inside for Prathna & Rudra's wedding preparations when Meheck, Seema, & Urvashi secretly talk behind the bushes about taking the nine Manis from Prarthna before she becomes the Maha Shesh Naagin.

Seems taunts Mehek that she cannot just ask for them from Prathna but Meheck is sure that she will win this time.

Pratha sees all three of them & vows to protect Prathna, even if it means giving away her life.

Prathna also gets a nightmare in which she sees Rudra sneakily coming up to her and meeting before their wedding day.

She hides her face but when he touches her, he gets knocked down on the ground & foam starts coming from his mouth.

Prarthana wakes up with a shriek and worries whether her powers will harm Rudra.

Meanwhile, Rudra helps prepare the Mandap along with Rishabh & Pratha.

Upon meeting Pratha & sensing her fear, Inspector Dixit urges her to confess the reason for her worry to her husband as he will always hold her hand.

Rudra offers to protect the Gujral House while Prathna is sent to King Takshaka.

Prathna asks him to safeguard her lover, Rudra, before she agrees to do this Maha Pooja.

King Takshaka grants her this wish but reminds her that she cannot stand or go anywhere during the worship.

Meanwhile, Meheck, Urvashi, and Seema make their grand entry back into the Gujral Mansion and get confronted by Rishabh.

Rudra also stands to support Rishabh but Meheck slaps them away from her serpent tail.

Sayali asks Urvashi not to cause any trouble but Reem's daughter is also slapped by her evil Nani.

Meheck enters Prathna's room and asks her where the nine Manis are.

She introduces herself as Prathna's Mausi, however, she realises that it is not Prathna but Pratha.

Meheck then orders Urvashi & Seema to find where Prathna is because she can hear the chants.

Pratha comes into her Naagin roop and slaps Meheck with her tail.

The knife that can even kill a Shesh Naagin gets dropped to the ground.

Upstairs, Rudra points his gun at Seema but Urvashi hurts Rudra's back with a dagger and throws him off the ledge and he lands on the ground.

Later, Seema then gets confronted by Rishabh who is protecting the room where Prathna is doing the Puja with Takshaka.

Rishabh holds Seema by her neck and points her own knife at her but she pushes him off and kills him by taking a bigger knife.

Pratha realises that Rishabh is dying and becomes weak, dropping Meheck to the ground.

Meheck then kills Pratha with the powerful knife as PraRish struggle to meet their hands as they breathe their last.

In the upcoming story of Naagin 6 on 4th December 2022, Mehek who is Pratha's sister is back from the dead!

So far in the story of Naagin 6, Anmol dies while Prarthana becomes the Maha Shesh Naagin!

On the other hand, Rudra now knows Prathna's truth and they both decide to get married anew.

According to the latest spoiler of Naagin 6, Mehek will become a wedding crasher, taunting Pratha to welcome her after a long, twenty years.

With a magical, powerful knife, Mehek will kill Rudra and throw him off the ledge and later kill Pratha and Rishabh too.

As per the upcoming big twist of Naagin 6, only Prathna stays alive of the Gujral blood while the love of her life and her parents breathe their last.

What is in store for Prathna now? Can Maha Shesh Naagin defeat Mehek who is wearing the magical anklets?

Let us see how Prarthana plans her revenge in the future episodes of Naagin 6.

© Copyright tellybest.com, 2022, 2023. All Rights Reserved. Unauthorized use and/or duplication of any material from tellybest.com without written permission is strictly prohibited.
Cached Saved on: Wednesday 25th of January 2023 11:58:23 AMCached Disp on: Sunday 5th of February 2023 03:37:22 AM