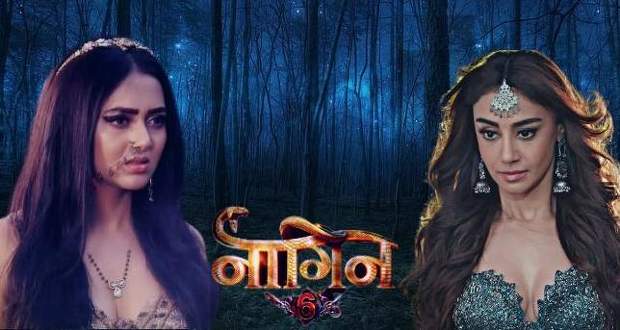 In the nightmare, she sees Rishabh get angry at her when she reveals her true identity to him.

She gets scared like a puppy in front of her husband who looks like he is going to beat her.

Pratha wakes up with a scream making Rishabh rub her back.

He tells Pratha that as her sleep has ended, the dream has ended too.

She informs Rishabh about him breaking up with her in the dream.

However, Rishabh tells Pratha he cannot even think of living without Pratha.

Pratha gets ready to sacrifice her Shesh Naagin powers

As it is a full moon night when the moon is red in the sky, Pratha gets ready to give up her supernatural powers to Lord Shiva.

She wears her crown and her Naagin jewellery but Mehak asks Pratha one more time if she is truly ready for it.

Pratha nods and visits the Farishta to ask him about how to sacrifice her powers.

The caring Farishta warns Pratha and asks her if she is truly ready and Pratha says a yes.

The Farishta has no choice but to guide Pratha.

He tells Shesh Naagin that she would have to travel to the hills and stand directly under the red moon's rays for the sacrificial process to begin.

Full of energy, Pratha runs toward her destination but the tree branches latch on her legs tightly.

She struggles a little but is able to pull her legs from the branches’ lock and runs ahead.

Even the clouds start roaring up in the sky, indicating a thunderstorm.

The Farishta appears in front of Pratha and asks her to reconsider her decision once again.

Pratha smiles but Farishta alerts Pratha that even the forces of Nature are daring to stop her.

However, Pratha believes that even her Lord, her Guru, Shiva himself, cannot stop her in the name of love.

Shiva was wooed by Gauri and sacrificed everything for Sati. Pratha is following the same path of love intensely.

Following Farishta’s instructions, she enters a Shiva temple with moon rays falling directly on her.

Several Naag and Naagins come and suck the poison out of Pratha’s body as she gets transformed into a normal human being.

Pratha closes her eyes in pain as the serpent sting her poison out fully.

After sacrificing her powers into Mahadeva’s lap, Pratha applies vermillion to her forehead and buys flowers for Rishabh.

Suddenly, Mehak calls Pratha and tells her how Ritesh, Rehan, and Vihaan have killed Samaira and are now trying to abuse her.

Pratha forgets for a second that she is no more a Shesh Naagin and runs as fast as she can to save her elder sister.

Pratha hits the three abusive boys with a rod to save Mehak as Samira lays dead on the ground with a knife in her back.

Surprisingly, Rishabh shows up too and threatens to kill Rehan but he grabs Mehak’s neck instead.

Rishabh also pushes Pratha hard to the ground when she tries to pull him away from hurting Mehak.

With no option left, Pratha hits Rehan, Vihaan, and Ritesh with a knife and runs away with a crying Mehak.

However, Mehak attacks Pratha unexpectedly the next moment with no remorse on her face.

Rishabh also sides with Pratha, delivering the biggest shock of her life to Pratha.

The police arrive and Mehak pretends to cry, blaming Pratha for Samaira’s death.

Locked inside the jail, Pratha remembers the moments that she spent with both Mehak and Rishabh and then what happened a few minutes ago.

Pratha cries as she remembers Rishabh putting his hand tightly around Mehak’s waist.

Much to Pratha’s surprise, Mehak visits her in jail and tells her that she deserves to rot behind the bars.

A crying Pratha asks Mehak why did she betray her like that. Mehak tells that Pratha got what Mehak wanted; to be a Shesh Naagin.

However, Pratha reminds Mehak that being Shesh Naagin was not Pratha’s first choice.

Pratha gets sentenced to death

After a few hours, the court declares that Pratha is the murderer of Samaira and decides to give her death as punishment.

In the upcoming story of Naagin Season 6 on 4th June 2022, Pratha aka Shesh Naagin is ready to sacrifice her supernatural abilities to lead a normal life with Rishabh.

So far in the story of Naagin 6, Pratha has defeated Maha Asura Seema and is fully ready to embrace a human life that she always wanted since her childhood.

However, a deep betrayal awaits Pratha.

According to the latest spoiler of Nagin 6, Rishabh will be teaming up with Mahek against Pratha.

The elder sister who always had Pratha's back will now be attacking her with a dagger, leaving Pratha shocked.

Further, Pratha will be locked inside a jail, pregnant with Rishabh's baby as per the upcoming twists of Nagin 6.

Is this destiny's big joke being played on Pratha who had always been selfless?

Let us see how the mood and course of Naagin 6 change as a pregnant Pratha gets behind the bars with Rishabh and Mahek making love behind her Pratha's back.

© Copyright tellybest.com, 2020, 2021. All Rights Reserved. Unauthorized use and/or duplication of any material from tellybest.com without written permission is strictly prohibited.
Cached Saved on: Saturday 6th of August 2022 04:14:00 PMCached Disp on: Thursday 11th of August 2022 11:31:03 PM