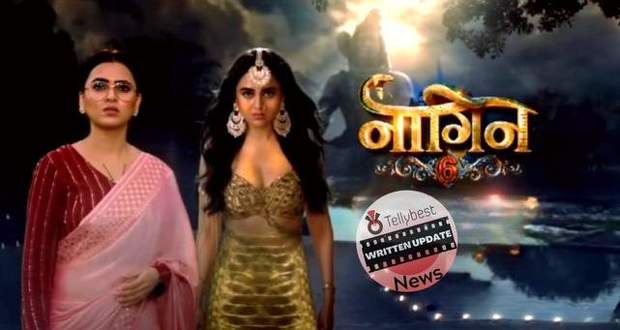 However, Shakti charges at Rishabh and strikes him with a knife.

Pratha becomes Shesh Naagin and beats Shakti up while Rishabh slowly wakes up from the piercing pain shooting in his belly.

Rishabh yells as he sees Shakti pushing a knife into his stomach.

However, Shakti swears he hates Rishabh so much and falls down the cliff while Rishabh cries his heart out.

Pratha walks closer to Rishabh and consoles him while they both go back to Gujral House.

Pratha goes to Naag Mahal to lay her gratitude at Lord Shiva’s feet.

She looks at Nani’s photo and says her wish has been granted finally.

Pratha can live a normal life along with her husband, Rishabh, and their daughter, Anmol.

Strong winds blow by but Pratha thinks it is her Nani’s agreement too that Anmol doesn’t have to become a Shesh Naagin like Pratha one day.

Just then, Farishta appears and tells Pratha she got what she wanted.

Pratha says she will not use her Shesh Naagin powers anymore and just wishes to live for Rishabh and Anmol.

However, Farishta warns Pratha that she doesn’t know what will happen.

Pratha gets restless and goes back to Gujral House with Anmol in her hand.

Rishabh stops her from entering until he and Chanda do Pratha and Anmol’s Puja together.

Both the ladies of Rishabh’s life enter his house again and he couldn’t be happier.

Meanwhile, Pratha goes to meet RPS’ aunt and sees her packing her bag.

Pratha says she can stay since she is an insider-only but RPS’ aunt says she has to go meet RPS in the jail.

At Jail, RPS screams at his aunt saying she ruined his life and is only pretending to help Pratha.

His aunt laughs evilly and confesses she killed RPS’ wives since they saw something they shouldn’t have.

His aunt reveals that Pratha thinks her worries have stopped for the better but she is in a delusion.

According to RPS’ aunt, her worries have just begun.

RPS’ aunt then goes to a lady who is referred to as Saiba.

She lives in a black tent with fire lamps lit across the way.

RPS’s aunt greets her and it is Seema’s mother who is Saiba and still very much alive.

RPS’s aunt narrates how Meheck exchanged Professor’s baby with Pratha’s so they can have full access to her whenever they want to.

So now, Pratha’s baby is not hers but Professor’s.

While the baby girl with Professor is Pratha’s baby.

Seema’s mother says she killed Pratha’s Nani because she heard a big revelation related to the Asuras.

The sage predicted that Nageshwari’s grandchild will become Shesh Naagin who will save Bharat from a big pandemic.

Whereas, Pratha’s baby girl will become the end of all the evil forces on Earth, including the Asura clan.

That is why Seema’s mother will take care of and raise Pratha’s baby as her own so they can use her for themselves when she reaches twenty-one years of age.

Saiba laughs evilly while RPS’ aunt joins her too.

Pratha again meets with a Farishta and tells him she is sure of disposing of her Shesh Naagin powers.

She also prays to Lord Shiva to spare Anmol from hoarding the burden of being a Sarvashreshth Shesh Naagin.

Just then, a snake appears behind the Shivling and Anmol gets scared.

Pratha takes it as a sign that her daughter doesn’t want to be a Shesh Naagin.

Meanwhile, Professor is busy cooking and playing with his (Pratha’s daughter) Prarthna.

When he goes back to the kitchen, a black snake crawls toward her and Prarthna doesn’t get scared.

Rather, the snake opens his hood and goes to stand erect behind Prarthna as if ready to receive her command.

A leap of twenty years is shown where Anmol has become twenty-one years old now.

She and Pratha are out grocery shopping while Anmol is a chic, modern-day-looking girl.

She asks Pratha why couldn’t they just buy the vegetables from a supermarket while Pratha says how will these vegetable sellers earn their daily bread.

Just then, a rush of people charges toward them, and Pratha sees a big tiger coming.

A woman falls to the ground, crying for help from the tiger.

In the upcoming story of Naagin 6 on 4th September 2022, there will be a face-off between Shakti and Rishabh.

So far in the story of Naagin 6, Pratha finds her daughter with the Professor and feels very glad to be reunited with her.

However, Shakti feels insulted as if Pratha's attention has been snatched away from him.

He decides to propose to Pratha so she can feel close to him, thinking him to be Rishabh.

According to the latest spoiler of Naagin 6, Rishabh will stop Pratha and Shakti's marriage by sneaking away from the storeroom. Shakti will feel threatened and hold Pratha and Rishabh's baby hostage.

Will Pratha change her avatar from a human being to that of a Shesh Naagin in front of the whole Gujral Family to save her baby?

Let us see how Pratha saves her baby girl from Shakti and what shall happen in PraRish's relationship since Rishabh still does not know Pratha is a Naagin in the future episodes of Nagin 6.