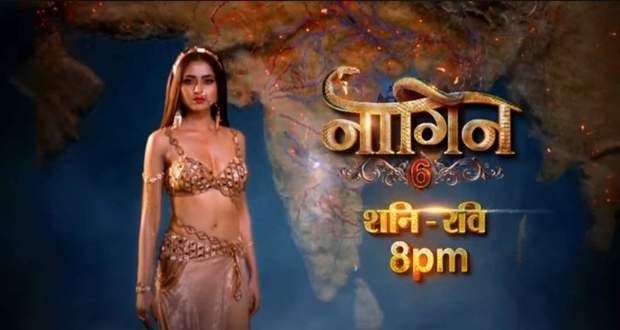 Today's Naagin 6 5th March 2022 episode starts with Pratha disclosing herself as Shesh Naagin after screaming like a banshee. Her skin starts to turn into snake scales glowing magnificently under the moonlight. Her golden scales sparkle radiantly.

At the same time, Meheck folds her hand respecting her queen. Pratha lifts Meheck and saves her.

Furthermore, Pratha talks about her love for the motherland. She warns Lalith that she, the queen of the serpent, Sarvashreshth Naagin will end his life.

On the other hand, Pratha fights with the snake charmers by whooping them in the air through her fascinating tail.

Later, Lalith begs Pratha to spare his life but she hunts him down mercilessly and captures him with her tail.

At the same time, Rishabh finds Lalith's footprint and resumes to search for him.

Elsewhere, Seema rushes everyone to arrange and garnish the house to perfection. The priest informs her that the rituals must start in thirty minutes. She texts Rishabh about his whereabouts.

However, Anya informs Seema about Lalith's consignment meeting and offers to help with the consignments.

Hence, Seema gets all worked up and warns Anya to not worry about business but to help the brides to get dressed up.

On the other hand, Rishabh thinks that Mayank lied to him and drives back home after receiving Seema's text message.

Elsewhere, Pratha throws Lalith down and curses him that he will experience the deadliest and scariest death. She says that his every nerve, cell and blood will taste the pain.

Further, Pratha extends her hands from which magical and fiery glitter sparkle. Vipers crawl out from the soil and strangle Lalith to his death.

At the same time, Meheck runs out of her powers and faints. Pratha chants and hails Lord Shiva for Meheck's recovery.

Due to Pratha's devotion and determination, Meheck gains consciousness and thanks to her for saving her life.

However, the night of blood moon makes Pratha and Meheck weak, draining their powers.

Furthermore, Pratha's unique skin burns her with snake scale delaying her presence in the wedding house.

Elsewhere, Rishabh and Anya knock on Pratha’s door but she doesn’t respond. He barges into her room, only to find it empty.

On the other hand, Radha gets a half glimpse of Pratha and Meheck lying on the ground. She rushes and informs Rishabh.

At the same time, Pratha enters the room covering her face with a veil. Meheck diverts Radha by informing her about a frantic dog.

Furthermore, Rishabh questions Pratha about her whereabouts and harshly grabs her hand hurting her. He asks her sorry and resumes his questions.

However, Seema enters Pratha's room and asks Rishab to get ready for the marriage.

On the other hand, Seems brings a jewellery to gift Pratha.

At the same time, Pratha's father interrupts Seema from seeing Pratha stating that it is not a good omen to look at the bride before marriage.

Later, Pratha's father shows his gratefulness by touching her feet, but she stops him from doing so.

Elsewhere, Rishabh tries to talk with Ritesh about forfeiting from the marriage. Rithesh gets angry and disagrees with Rishabh.

Furthermore, Pratha walks down the steps covering her face with a veil. Her paw trips and her heels come out. Rishab thinks that it is Reem and helps her wear it.

On their way, Pratha's dad touches Pratha's feet and states that daughters resemble the goddess Lakshmi.

However, Lalith's mother calls him but Meheck answers the call mimicking him, and asks them to resume the wedding rituals.

On the other hand, Pratha's veil gets stuck to someone and starts revealing her.

So far in the story of Naagin 6, we saw Pratha revealing her true identity as Sarvashreshth Shesh Naagin to Lalith.

Further, she saves Meheck from Lalith and the snake charmers.

According to the latest promo of Naagin 6, Pratha and Rishab stand face to face clutching the chaplet to get married.

About Lalith, it is yet to know what Pratha and Meheck had done to him. With one Asur out of the picture, what will happen to Lalith?

On the other hand, Pratha agrees to marry Rishabh to take revenge upon their anti-patriotic family.

But why will Rishabh agree to marry Pratha? Is it because Rishab knows about Pratha being a Naagin and to save his family from the clutches of Naagin Pratha that he will take this drastic step?

Check out the latest episode of Naagin 6 on 5th March 2022 to know the story further.