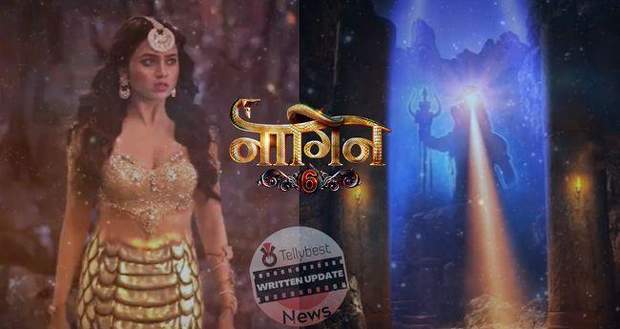 Anmol’s friends keep Prathna engaged so she cannot see what Anmol is doing with Rudra.

Cajoling Rudra to dance with her, Anmol tries her best to get his attention.

She dances with him while Rudra starts to get a little woozy.

Instead of Anmol, he sees Prathna in front of her and enjoys dancing.

However, Anmol takes him upstairs while Rudra gets a little conscious and asks her why she is doing this to him when she knows he only loves Prathna.

Meanwhile, Prathna hears this and Anmol leaves the room irritated.

On the other hand, Pratha reveals all the secrets of her life, telling Rishabh about Zain, Yeti, & Mehek’s betrayal as well.

Rishabh informs Pratha that Zain is back but he gets a call when Pratha starts to say that Prathna is their daughter only.

Pratha then goes to the Naag Mahal to pray to Lord Shiva to protect Rishabh from Prathna, who is a Shesh Naagin.

She does the Taandav dance but the lamp lit in front of Lord Shiva blows off, making Pratha worry as she sees this as a bad omen.

She comes back to Gujral House where her 'Mangalsutra' gets stuck on the decorations on the stairs.

Chanda asks Pratha to be careful as today is Dev Diwali. Prathna comes and taunts Pratha by narrating the story that today Shiva & Gauri got together this day, indicating that Rishabh is in danger.

After Chanda leaves, Pratha asks Prathna not to do any mistake in her anger while Prathna says when it was Pratha's duty to save the nation, she chose Rishabh, putting her father's (Professor's) life in jeopardy that ultimately took his life.

Upstairs, Rishabh gifts Prathna a saree and asks her to wear it.

Prathna says she doesn't know how to tie it while Rudra helps her dress up in front of the mirror.

She begins to think whether Rudra is a criminal or innocent, that he showers so much love on her.

On the other hand, Anmol shouts in her room and throws things around when Urvashi manipulates her mind, saying Rishbah & Pratha have started giving attention to Prathna more.

Later, Pratha tries to tell Rishabh about the current Shesh Naagin which is Prathna who is their daughter.

Rishabh gets stunned but asks Pratha not to put her life in danger.

However, this was not Rishabh but Prathna who did not want Pratha to reveal everything to Mr. Gujral.

Just then, Prathna gets a call from Rudra's phone, asking her to come near Vasuki Shesh Mandir.

Meanwhile, Anmol comes to Prathna and asks whether she has thought about her marriage or not in front of Urvashi.

Pratha realizes that Prathna is speaking out of Urvashi's manipulation & asks her not to get influenced by anyone.

Afterward, Prathna reaches the Vasuki Shesh Mandir spot but someone from the back attacks her neck with a knife greased with the substance used to weaken Shesh Naagin's powers.

The anonymous man informs Mr. Raichand but Prathna misunderstands this as Rudra's attempt to kill her.

At Gujral Mansion, Pratha gets a call from Rishabh who tells her to stay indoors while he is at Vasuki Shesh Mandir's spot.

Pratha realizes that it was not Rishbah but Prathna who took his form prior.

On the other hand, Zain & his other people tie a weakened Prathna to a tree as her powers get exposed and her Naag Mani shines a light on the Vasuki Shesh Mandir.

Rishabh sees all this and gets surprised when Rudra's father takes him at a gunpoint.

Mr. Raichand tells Rishabh that Prathna is his daughter and a Shesh Naagin while Patali and Urvashi make fun of Pratha's condition by asking servants to put garlands around Prathna and Rishabh's photograph like their funeral.

Pratha goes in her snake form to save Prathna and sees Rishabh lying unconscious.

Rishabh knows Prathna is HIS daughter

She helps him get up while he says they have to save Prathna as he knows now that she is their daughter & a Shesh Naagin.

Zain along with Rudra's father & mother load their truck with all the wealth found inside the Mandir while Prathna burns in flames of anger, promising to kill both Rudra & Rishabh.

In the upcoming story of Naagin 6 on 5th November 2022, Prathna will reveal her plan to Pratha of killing Rishabh.

So far in the story of Naagin 6, Pratha & Prathna come face to face while Patali & Suhasini successfully manipulate Anmol's mind to take revenge on Prathna for marrying Rudra.

According to the latest spoilers of Naagin 6, Rishabh asks Pratha who the Nagin is after his life, and Pratha takes Prathna's name.

She tells Rishabh that she married Rudra just so she could kill Rishabh.

In the upcoming twist of Nagin 6, Pratha will go to the Naag Mahal & pray to Lord Shiva to protect her husband, Rishabh.

However, Lord Shiva will hear Pratha's pleas and appear in front of her & Prathna, urging them to come together to save Bhaarat.

Let us see whether Prathna burns Rishabh alive in the flames of revenge or whether she gets burned herself flames of anger in future episodes of Naagin 6.

To get to know more, download Naagin season 6 episode 77 or all episodes or watch the online full-show of Naagin 6, go to the Voot app.

© Copyright tellybest.com, 2022, 2023. All Rights Reserved. Unauthorized use and/or duplication of any material from tellybest.com without written permission is strictly prohibited.
Cached Saved on: Monday 21st of November 2022 12:47:18 AMCached Disp on: Saturday 10th of December 2022 03:20:01 PM