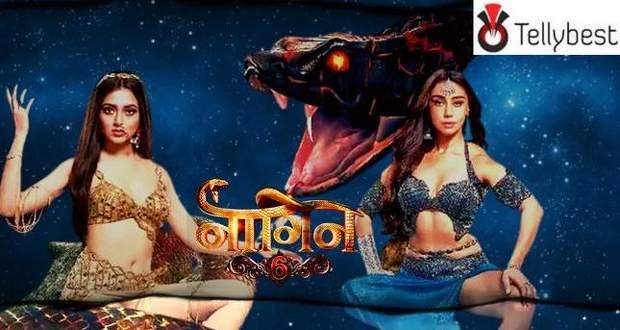 Pratha’s white saree gets covered with Kumkum while she performs the Taandav and shortly King Takshaka enters the Naag Mahal with Naag and Naagins welcoming him.

Pratha falls to the ground after getting exhausted and bows down in front of King Takshaka’s feet.

On the auspicious occasion of Maha Naag Panchami, Shesh Naagin has to perform an Abhishekam for the Naag Raja and King Takshaka compliments Pratha for looking so much like her Nani.

Pratha gets surprised when King Takshaka reveals that Seema’s mother did not actually kill Pratha’s Nani.

He promises to tell the rest of the story to Pratha later and asks Pratha to wish for something.

Pratha points toward her white saree and tells King Takshaka her life is missing colours ever since her husband Rishabh died.

She only wants him to come alive. However, King Takshaka says he cannot resurrect Rishabh because the domain of time does not come under him.

This makes Pratha angry and she storms out of the Naag Mahal while Naag and Naagins request her to stay to complete the Abhishekam.

Meanwhile, Mehek throws things around in her room and tells Urvashi that she is no more a Shesh Naagin.

Rather Kiara is Pratha and Pratha is Kiara.

Urvashi's eyes pop out in surprise and she tells Mehek to take it easy but Mehek girdles her tail around Urvashi.

Urvashi apologizes while Mehek threatens her not to say anything that makes her mad.

Just then, Mehek gets a call from Kiara who asks Mehek and Urvashi to meet at the Salt land so she can give it to her.

Mehek’s mood changes while Urvashi says Kiara can’t be Pratha, otherwise why would she hand the salt land so easily to them?

Mehek has a plan and she talks to Zain in advance and asks him to release Yeti in replacement for the salt land.

Zain makes a deal with Mehek and releases Yeti in the warehouse where Pratha and RPS are arriving.

In between, RPS spots a snake blocking the way on the road making Pratha get on her knees.

Pratha talks to the snake, referring to it as Naag Raja, saying he need not worry about Pratha because her fate is already written.

She won’t die easily and asks for his blessings.

In the warehouse, Pratha tells RPS the reason she is giving this salt land to Mehek and Zain since it has a secret passage to the border and got built during the time of India’s partition.

Pratha also informs RPS that Zain and his people are anti-nationals who deal in transporting drugs and that is why they need this land.

She threatens him to never touch her again, saying Rishabh has no replacement.

Mehek and Urvashi soon arrive and introduces Zain as their partner. RPS is asked by Zain to sign the papers while Kiara can wait in the warehouse.

This makes Mehek giddy as she hides in the corner along with Urvashi to see whether Kiara is Pratha or not.

Mehek tells Urvashi that Zain has already released Yeti and if he attacks Kiara, Mehek would surely know about Kiara’s real identity.

Yeti enters the warehouse, growling and howling while Pratha feels conflicted about whether to turn into Shesh Naagin or not since she knows Mehek is watching her secretly.

Urvashi tells Mehek that RPS will eat them alive if something happens to Kiara and she is not Pratha.

However, Mehek stays persistent and vouches that Kiara is indeed Pratha.

Pratha pretends to faint and falls to the ground in front of Yeti, making Mehek worry.

Mehek is a scaredy-cat

Mehek runs for her life because she believes she is Shesh Naagin again while Urvashi curses and taunts her for not being worthy enough to hold the title of Shesh Naagin.

RPS helps Pratha wake up and Kiara tells everyone she saw a big gorilla attack her.

However, Urvashi lies and hurriedly says Kiara must have dreamt. RPS then ushers Zain, Mehek, and Urvashi outside so Pratha can transform into Shesh Naagin and deal with Yeti alone.

However, the Yeti in the warehouse is Farishta who took the form of Yeti to help Pratha’s secret stay one in front of Mehek.

Pratha suddenly feels apologetic and goes to Naag Mahal to complete the Abhishekam which she did not.

Outside, the Naag Mahal, Naag & Naagins ask Pratha to help them get rid of the actual Yeti who is searching for Shesh Naagin.

At first, Pratha is able to dodge Yeti but he pounces her down, making Pratha fall flat on her face.

As Yeti picks Shesh Naagin in the air, she is suddenly reminded of Rishabh and her baby and gains the strength to fight the big animal back.

In the upcoming story of Naagin 6 on 6th August 2022, Pratha's real face will come alive in front of Mehek when she catches her welcoming King Takshaka in the Naag Mahal.

So far in the story of Naagin 6, Rishabh dies while Pratha attends his funerary rites in form of Mehek.

However, Mehek will catch Pratha and welcome King Takshaka, and come to know she is no more a Shesh Naagin and Pratha is still alive!

According to the latest spoiler of Naagin 6, Mehek will go mad and call upon Yeti to kill Pratha.

What will happen when Sarvasrestha Shesh Naagin and Yeti come face to face on the auspicious night of Maha Naag Panchami?

Let us see how Pratha faces Yeti and whether she can prove her worth in front of Urvashi and Mehek in the future episodes of Naagin 6.

© Copyright tellybest.com, 2022, 2023. All Rights Reserved. Unauthorized use and/or duplication of any material from tellybest.com without written permission is strictly prohibited.
Cached Saved on: Tuesday 22nd of November 2022 06:14:02 AMCached Disp on: Friday 9th of December 2022 05:12:39 PM