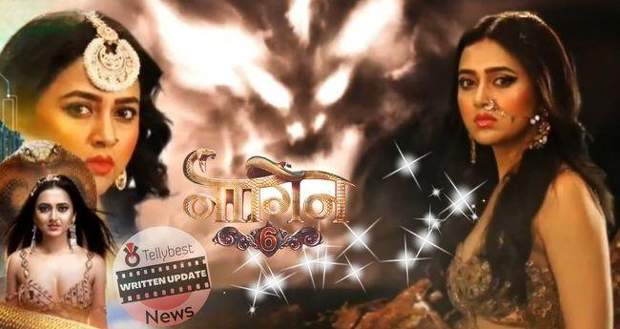 Today's Naagin 6 6th November 2022 episode starts with Pratha running on the road in search of Prarthna while Rishabh leaves in the truck to save Bharat.

Suddenly, Rishabh presses the break as he finds somebody lying in the middle of the road.

Stepping down from the truck, Rishabh finds Prarthna and tries comforting her, however, Prarthna tells Rishabh that she had also wanted to live her life peacefully with her father whom Rishabh killed mercilessly.

Furthermore, Pratha comes across Rishabh looking around for him madly. She sees the retreating back of a girl whom she assumes to be Prarthna.

Rishabh tells Pratha that he loves her the most while Pratha says that she won’t let anything happen to him.

Meanwhile, the traitors of the country rejoice over their victory in stealing the country's wealth.

Zayn shows the diamond to his team which makes everyone's eyes gleam with the greed visible in them.

Pratha brings Rishabh back home where the doctor tells her that Rishabh has gone into a coma, shocking Pratha and Chanda who cries in pain.

Pratha asks for Anmol's whereabouts worrying how will take the news as she is Rishabh's dearest child.

Chanda informs Pratha that she has sent Anmol to see a guy who can be a prospective groom for her.

Anmol goes to the hotel where the meeting was fixed with the guy who happened to be the owner of the hotel.

The guy, Rithvik, comes and sees Anmol, winning her heart in the meeting.

Rithvik invites Anmol to the Halloween party which is held in the hotel at night, hosted by Zayn only for his international guests.

Anmol chirpily returns home telling Chanda that she liked the guy and got her someone special in him.

Running upstairs, Anmol goes to Rishabh's room to tell him about Rithvik but gets shocked to see him lying on the bed lifelessly.

Pratha tells Anmol that Rishabh has gone into a coma which makes Anmol cry in pain.

Surprising everybody, Anmol announces that she will marry Rithvik soon as Rishabh was worried about her only, and seeing her moving on in her life he will be very happy.

Pratha reasons that they don't know the guy and his family but Anmol tell her that they can meet him at the party.

Also, Anmol states that she and Rithwik will get engaged the next day only while Pratha agrees with her.

Prarthna plans to kill Rudra whom she suspects to be involved with Rishabh in killing the professor.

However, Pratha fails Prathna's plan and fights her to avenge her for making Rishabh go into a coma.

As the mother-daughter fight each other, Naag Raj calls the Shesh Naagin into Naag Mahal.

Both the Naagins go to Naag Mahal where Naag Raj tells them to come together and save the country's wealth from going out of the country.

Even though, both Naagin's doesn't want to unite but agree as the Naag Raj reminds them of their duties toward the nation.

Later in the evening, Pratha, Prarthna, Anmol with her friends, and Rudra comes to the Halloween party hosted by Zayn where he planned to smuggle all the gold and elope from the country for once and all.

Pratha dresses as Kiara which scares Urvashi and Patali as they remember the past time when Pratha had given them a horrible death as Kiara.

Prarthna comes in her real Shesh Naagin costume at which Pratha gives her a disapproving glance and looks for Zayn.

Both Pratha and Prarthna face many clashes in their thoughts and approaches to reaching the culprit, however, Pratha gets the upper hand being the mother and former Shesh Naagin.

Meanwhile, Anmol's heart cannot forget Rudra despite she has announced her engagement with Rithwik.

Influenced by Rudra's friend who is a part of Zayn's team, Anmol spikes Rudra's drink to make him come close to her in his intoxicated state.

Zayn gets happy seeing Rudra being taken away from his path and he can fly out of the country now without any hindrance.

However, Zayn's plan backfires when Rudra pushes Anmol away from him who was trying to kiss him.

Rudra runs to the terrace where Zayn was waiting for his helicopter meanwhile recalling how he had exchanged the spiked drink with other.

The Truth unveils before Prarthna

Rudra gets Zayn and his men at his gunpoint before they could escape from there.

In the meantime, Prarthna also comes to the terrace and hides behind a spot.

Zayn raises his hand in submission act as Rudra asks him to return the diamond that he has stolen from the country while also telling him that the truck carrying the smuggled gold will also be in police custody in some time.

However, someone attacks Rudra from behind hitting him on his head and making him fall on the floor unconscious.

Prarthna who is watching the scene unfold gets shocked to see Rudra's parents, his friend, and other men there, realizing the real traitors of the country.

Also, Zayn himself confesses loudly that Prarthna made their work easier by killing Rishabh considering him the murderer of her father.

The truth finally makes its appearance before Prarthna who was blinded by the rage of revenge and assumed Rishabh and Rudra are guilty of the her father' death.

In the upcoming story of Naagin 6 on 6th November 2022, Prathna forgives killing Rishabh as guilt strikes her and she gets to know that the real perpetrator is not Rishabh.

She releases him from her tail and turns her back, feeling dejected.

So far in the story of Naagin 6, Zain and Mr. Raichand (Rudra's father) trap Prathna to use her powers to open Vasuki Shesh Mandir.

As per the latest spoilers of Naagin 6, Prathna decides to drop her Shesh Naagin powers as she is steeped in guilt.

Almost on the verge of giving up her supernatural powers, Pratha stops her and reminds her that Bharat needs a Shesh Naagin for its protection.

In the upcoming twist of Naagin 6, Rishabh gets attacked by an anonymous man who weakened Prathna's powers with the knife.

Pratha and Prathna get shocked and look at the sky, hoping to get answers from Shiva himself now.

Let us see whether Rishabh dies due to Prathna's misunderstanding or whether Lord Shiva instructs both mother & daughter to work together as a team in future episodes of Naagin 6.

To get to know more, download Naagin season 6 episode 78 or all episodes or watch the online full-show of Naagin 6, go to the Voot app.

© Copyright tellybest.com, 2022, 2023. All Rights Reserved. Unauthorized use and/or duplication of any material from tellybest.com without written permission is strictly prohibited.
Cached Saved on: Monday 21st of November 2022 01:18:55 AMCached Disp on: Saturday 10th of December 2022 03:40:50 PM