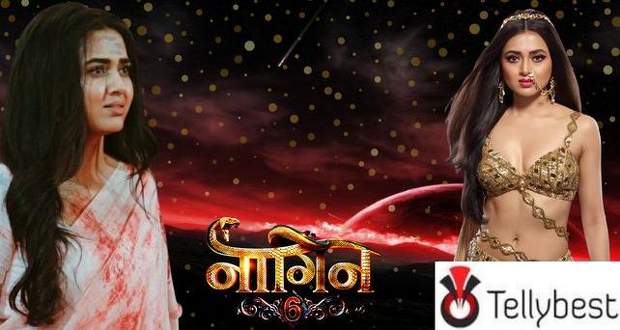 Today's Naagin 6 7th August 2022 episode starts with Pratha fighting Yeti off her and receiving cheers from the Naag & Naagins that seek Shesh Naagin’s refuge in the Naag Mahal.

Nag Raja Yash asks King Takshaka why he did not grant Pratha her wish on the occasion of Maha Nag Panchami and King Takshaka says he would have granted Pratha’s wish only if Rishabh is dead but he is alive.

However, Pratha is oblivious to this information and King Takshaka tells Naga Raja not to reveal this either to Pratha.

Meanwhile, the Trust Fund people come to Gujral Mansion to tell Meheck that he donated his entire property to them.

However, Meheck shows them a video of Rishabh saying if he dies, his whole property will belong to Meheck and she even shows them proof of his signature.

This confuses Urvashi and she asks Meheck how and when did she even record this video.

Meheck then says she asked Shakti to do by baiting him with Deepika’s name (Kiara).

Urvashi asks for her property of share and Meheck agrees.

However, Pratha uses this opportunity to create a misunderstanding between Urvashi, Meheck, Rehan, and Reem.

Pratha in disguise as Meheck makes Rehan and Ritesh believe that Urvashi won’t allow Meheck to give them a share of Rishabh’s property. Pratha becomes Reem and fills Urvashi’s ears saying she does not believe Meheck since she spotted her talking secretly to the trust fund people.

This makes Meheck and Urvashi fight physically where Urvashi pushes Meheck off after grabbing her waist while Meheck grabs Urvashi’s ear.

Meheck becomes greedy and tells Urvashi they should not fight due to Rishabh’s property, but rather participate in this Swayamvar to become Naga Raani and behold Kuber’s wealth that resides safely in Naag Lok.

On the other hand, Rajesh’s mother asks Pratha to get ready for Muh Dikhai Ceremony.

However, she hesitates wearing red and tells RPS that since Rishabh has died, she doesn’t feel worthy of wearing colorful clothes.

Pratha gets ready half-heartedly and doesn’t apply sindoor on her forehead.

Pratha imagines Rishabh filling her forehead and carries on with the celebration half-heartedly.

However, she gets surprised when Meheck and Urvashi come together to invite Pratha and RPS to Meheck’s birthday party.

Meanwhile, Ritesh, Reem, and Rehan backbitch about Meheck and make a plan of getting Meheck under direct moon rays so her Naagin secret comes out in front of everyone.

Urvashi again warns Meheck to beware on this full moon night and also advises her not to enjoy too much in front of the officials coming to the party.

Otherwise, Rishabh’s wealth won’t get transferred to her bank account.

Meheck almost falls after tripping on her heels but Kiara saves her, saying she should not fall flat on her face on her birthday.

Meheck awkwardly smiles but Kiara pulls her for a hug, internally saying if she doesn’t add fire on Meheck’s birthday, she is not Shesh Naagin.

In the upcoming story of Naagin 6 on 7th August 2022, Pratha will be fighting Yeti in the Naag Mahal and doing the unfinished Abhisehkam for King Takshaka.

So far in the story of Nagin 6, Meheck tests Kiara to know whether it is Pratha or not since Meheck was not able to open the door of Naag Mahal despite her believing she is Shesh Naagin.

Her belief gets stored when Pratha remains Kiara and doesn't transform into Shesh Naagin to make Meheck believe she is still Shesh Naagin.

According to the latest spoiler of Naagin 6, Pratha will be able to defeat Yeti and get ready to punish Meheck, and everyone involved who killed Pratha and Rishabh's baby.

Pratha would be feeling pessimistic and awkward wearing colorful clothes since Rishabh is no more alive.

However, she doesn't know the reason why King Takshaka did not resurrect Rishabh since he is not dead and still alive according to the upcoming twists in Naagin 6.

Let us see how Pratha finds out about Rishabh before she kills herself after defeating Meheck in the future episodes of Nagin 6.