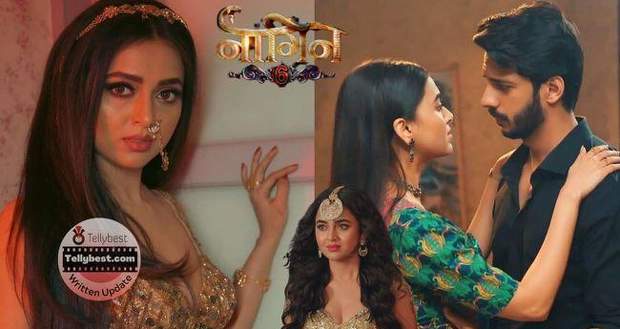 Today's Naagin 6 7th January 2023 episode starts with Prarthana remembering everything that happened in her past.

She relives the dark memory of when she saw her parents, Pratha and Rishabh die, along with her love, Rudra, who was forged to death on the mandap.

Meanwhile, Meheck and Seema are talking amongst themselves about poor Preeti who doesn't remember a thing.

Seema listens to Meheck show off tone when she says she just needs to fetch those nine Naag Manis and then she doesn't need Preeti.

Prarthana Throws Herself Into Fire!

On the other hand, an enraged Prarthana goes to the forest to burn herself up in a pit of fire.

She addresses Mahadeva who is the Lord of the cosmos and the one who carries the snake upon his right shoulder, telling him that she burned three dead bodies in the past but today, she will also add herself.

Prarthana lights up a pyre and jumps into it. However, three to four snakes come to rescue her and douse the fire down.

Prathna gets even more frustrated and is about to curse them, challenging them & uttering how dare they not let her die when king Takshaka shows up.

King Takshaka asks Prarthana why she is doing all this and if these Naags are not at fault since they have given their precious Naag Manis to her.

He says that they are just trying to save Prarthana but Prathna's anger doesn't die down.

In Gujral Mansion, the kids are talking amongst themselves and the youngest of them says that she doesn't want to live here since Chudail Aunty also resides here.

Meheck hears in secrecy and Raghuveer comes and asks the kids to eat, also assuring them that Preeti is alright and will wake up very soon.

Meheck then comes to meet Raghu and fills his ears for Preeti, saying Preeti might have swapped places with Ananya because maybe, she loves him too and did all of this in jealousy.

On the other hand, the weather gets worse and worse as Prarthana does a dance of destruction to hail upon the Lord and asks him to either give her dear ones whom they lost or suck her back where her loved ones are.

King Takshaka watches all of this in hindsight and worries about the Earth getting wiped out of sheer life since Maha Shesh Naagin is angry.

Suddenly, Prarthana sees Pratha and goes to hug her emotionally.

However, Prathna senses that it is not Pratha but it is Naagin Shesha (Adaa Khan) who tells Prathna that the time has come to wipe out all her enemies and she is here to help her.

Later, Prarthana goes back to Gujral House after her anger has cooled down and pretends that she still doesn't know anything about Meheck.

Meheck gives her a necklace as a gift but gets surprised when Prathna utters that she feels she has a connection with this house.

In her room, Raghuveer asks Preeti why she married him and she lies, saying she didn't know how she ended up in the mandap.

However, later Preeti gets a feeling that Raghuveer is in danger and he indeed is when he goes to the Ahlawat store to find some goons ready to loot it.

Raghuveer kicks the majority of them but gets stuck when two of them hold his hands together.

Another one pulls the trigger but Prarthana reaches just in time and freezes the moment.

She chucks out the suspended bullet and then resumes time, after taking the form of a snake.

Raghuveer recognizes the golden snake he saved the life of the other day and thinks snakes are even better at returning their loyalty.

Elsewhere, Mrs. Thakral irritatingly tells Ananya that her plan of sending the goons failed and Raghuveer is safe.

However, Ananya promises to make his & Preeti's life hell.

Meanwhile, Meheck gets scared after she receives a paper on which "I am back" is written with blood.

On top of this, she sees Pratha sitting on a creaky chair and screams to death.

Vinay comes to calm her down and says there is no one.

In the upcoming story of Naagin 6, Preeti remembers everything and realizes that she is a Maha Shesh Naagin!

So far in the story of Nagin 6, Meheck gets Preeti (Prarthana) & Raghuveer married out of spite, so she can keep tabs on her to steal those nine Naag Manis.

According to the latest spoiler of Naagin 6, Prarthana goes to Naag Mahal to do the dance of destruction and asks Lord Shiva to either return her parents because she won't spare anyone now.

Prathna says that she has already burnt three dead bodies in the past and the fourth one will be hers.

Elsewhere King Takshaka is seen saying that if Prarthana's dance is not stopped, the whole Earth will vanish in a snap of a finger.

In a rage, Prathna requests Shiva to either return her parents or transport her where they are.

As per the latest gossip of Naagin 6, Prarthana gets emotional when she sees her mother Pratha coming from the other side of the ancient Shiva temple to greet her.

Let us see whether this is Prarthana's hallucination or if her God has sent Pratha for real in the future episodes of Naagin 6.

© Copyright tellybest.com, 2022, 2023. All Rights Reserved. Unauthorized use and/or duplication of any material from tellybest.com without written permission is strictly prohibited.
Cached Saved on: Wednesday 25th of January 2023 10:51:41 AMCached Disp on: Wednesday 1st of February 2023 09:57:23 PM