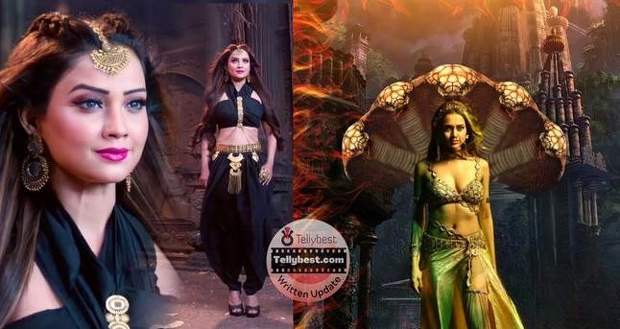 Today's Naagin 6 8th January 2023 episode starts with Prarthana getting ready for the reception but her hand is not able to reach the back of her blouse.

Raghuveer comes into the room to ask Preeti if she is ready but he keeps his face slanted so Preeti doesn't feel awkward.

Preeti tells him that she is almost ready but she is not able to tie the thread herself.

Raghuveer offers to help her by promising Preeti that he won't ogle at her naked back.

After the Dori (Thread) is tied, both of them go downstairs after Raghuveer fills the vermillion in Preeti's forehead where Ananya is waiting there for them.

Ananya enters the Gujral Mansion with a gift box, containing a secret present and speaks that Preeti and Raghu cannot be happy together because they have broken her heart first.

Raghuveer gets surprised to see Ananya calm as she wishes both him & Preeti the best of luck in their life.

Everyone gets mesmerized by her moves but Meheck and Seema sense something suspicious about her behavior.

A Snake Bites Raghuveer To Death!

Later, Preeti and Raghuveer also dance together as a couple and everyone bursts into a loud cheer of claps for them.

However, Ananya sneakily opens the gift box she came with and a snake emerges out of it.

The snake goes and bites Raghuveer on his leg and Preeti notices it.

Ananya follows both of them upstairs where Preeti lays him down on the bed.

However, Prarthana internally requests Shesha to come and she comes and urges Prarthana to use her Naagin powers to bring a blue Raghuveer back to life.

Prarthana changes into a snake and Ananya get shocked.

After getting overwhelmed, she decides to show this video to Seema and bumps into her just outside Raghuveer's room.

However, as Ananya shows Seema the video, Seema turns out to be Shesha who then helps Ananya forget her memories with Prarthana.

On the other hand, real Seema gets surprised to see Vinay in her room.

However, this is not Vinay but Meheck telling Seema that Prarthana's ghost is not letting her breathe, so that is why she has changed into Vinay's get-up.

Seema tells Meheck that she has thought of an idea to get the Nine Naag Manis from Prarthana and gives a love magical powder to Meheck to give to Preeti so she & Raghuveer consummate.

Vinay (Meheck) almost kisses Seema but Seema gets shy and says she is still in Vinay's get-up.

After Seema leaves, Vinay turns into Shesha as it was never Vinay or Meheck in the first place.

Seema mixes the powder into Preeti's drink and Preeti overflows with love.

Raghuveer has to carry Preeti to her room where Preeti gets all over him.

Meanwhile, Meheck gets ready in a nightie to hit the bed but Vinay throws rose petals at her as he is all ready to make love with her.

However, Meheck gets irritated and hypnotizes him to slap himself.

As Mehek combs her hair, she gets scared to see a reflection of herself as an old woman who laughs and mocks her for pretending to be young when she should have been dead.

In Raghuveer's room, Preeti pulls at his hand and dances all over him but Raghu urges her to go back to sleep.

The next morning, Preeti gets scared to see the bedroom all messy as she thinks something happened between her and Raghuveer.

However, Raghu assures her that nothing happened and later, Shesha informs Preeti that Seema mixed something in it.

They both decide to teach Meheck a lesson and Shesha takes Pratha's avatar, scaring Meheck.

Meheck screams and turns into a blue snake to run away rapidly but Prarthana catches her.

They both jail her inside a locked space in Naag Mahal while Seema suspects Sasha (Naagin Shesha) of hanging out so much with Prarthana.

Seema then does a weird ritual and gets aware that Sasha is no ordinary human being but a Naagin.

In the upcoming story of Naagin 6, Raghuveer fills Prarthana's forehead with vermillion!

So far in the story of Nagin 6, Prathna saves Raghuveer's life from the goons and also meets Naagin Shesha who will help her kill Seema & Mehek.

According to the latest spoiler of Naagin 6, Ananya, the girl with whom Raghu's marriage was fixed with, will attend his & Preeti's reception.

However, she will come with a snake wrapped as a gift inside a box to be released onto Raghu.

As per the latest gossip of Naagin 6, while dancing with Preeti, Raghuveer will get bitten by the snake and his breath will slow down to the effects of the poison.

Let us see whether Preeti (Prarthana) is able to save him in time without exposing to Mehek that she still remembers her past and is the Mahasarvasrestha Naagin.

© Copyright tellybest.com, 2022, 2023. All Rights Reserved. Unauthorized use and/or duplication of any material from tellybest.com without written permission is strictly prohibited.
Cached Saved on: Wednesday 25th of January 2023 10:04:01 AMCached Disp on: Monday 6th of February 2023 06:22:26 AM