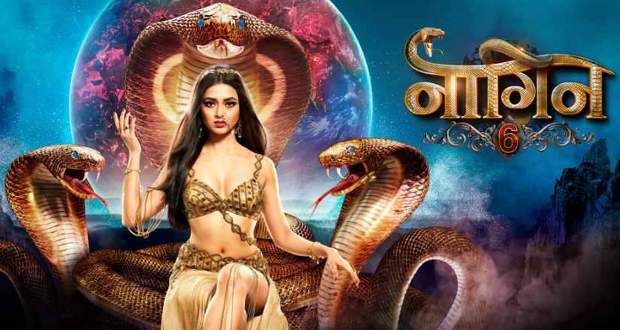 Today's Naagin season 6 8th May 2022 episode starts with Pratha asking Lalit all that he knows and remembers about the Amrit Kalash.

Mehak and Pratha listen to Lalit as he narrates a pivotal incident that changed his, Chanda’s, and Seema’s life forever.

Lalit reveals past history of Seema

Lalit reveals that Seema was once a best friend of Chanda.

Seema used to hang around Chanda while Chanda was pregnant with Rishabh.

One day, on a new moon night, Seema cajoled Chanda to accompany Tara (Seema's Mother) to a Shiva Temple as Seema had other errands to run.

Chanda agreed and walked with Tara. However, along the way, Chanda and Tara encounter Pratha’s Nani and Mother with the Amrit Kalash.

Tara challenges Pratha’s Nani to give the Kalash to her while Chanda watches a supernatural scene unfold in front of her eyes.

Tara calls her kites while Pratha’s Nani defeats all of them by turning into her Shesh Naagin form.

However, Tara disappears for a second only to attack the back of Pratha’s Nani with a dagger; the most sensitive part of a Shesh Naagin.

The Kalash is handed over to Pratha’s mother in a hurry when some of the ‘Amrit’ fall on her belly as she is pregnant with Pratha.

Pratha’s Nani urges Pratha’s mother to keep the Kalash at the secret place while she keeps Tara stuck in her tail.

It is only Chanda that is able to see where the Kalash is kept.

When Chanda returns home, she encounters Lalit and Seema in an embrace.

Chanda is livid and yells at Lalit about how he could do this.

Chanda also proclaims Seema to be a perfect conspirator.

However, there is one thing that she missed by not going and it is about the location of Amrit Kalash.

Chanda swears not to reveal the location of Amrit Kalash.

Just then, Tara enters Chanda’s house and scolds Seema for not accompanying her.

Seema hits a crying Chanda over her head, shocking both Tara and Lalit.

Lalit is shushed by Seema’s manipulative ways while Seema promises Tara that she will get the information about the Kalash no matter what.

Lalit is pushed off the terrace

Meanwhile, Seema makes a deal with an official of Chingistan that the plans made by Asur are going well.

Lalit eavesdrops on her conversation and ends up calling Rishabh.

Lalit wants to tell Rishabh the truth, however, Seema has already lied to Rishabh that Lalit is anti-national.

Rishabh pulls up a gun against Lalit’s head as Seema comes crying and pretends to be hurt by Lalit’s deceitful ways.

Pratha and Mehak join the scene that leads to Lalit running away to the terrace of a building.

Rishabh yells at Lalit to come down but Lalit puts a condition.

He will only come down if Rishabh hears him out and does not hand him over to the police.

Pratha tells Rishabh to calm down but it is too late for Lalit to speak as Seema pushes him off the edge secretly.

Lalit gets hospitalized and fights for his life as Seema taunts Pratha's inability to save him.

The doctor tells Seema that Lalit has been saved by God’s grace making her feel irritated inside.

On the other hand, Reem, Ritesh, Rehan, and Samaira hang out together, drinking alcohol.

Rehan brings Pratha into the conversation out of nowhere and tells everyone that he does not understand why everyone is obsessed with her.

Rehan also tells Ritesh that ever since her entry into the house, he is even afraid to use his phone openly.

Samaira tells Rehan that he should not talk so boorishly about Pratha as she is his “Bhabhi”.

Rehan replies that a wife should not interfere in his conversation and make arrangements for some dry fruits when her husband is sipping on a beer.

However, Samaira spots Rehan and Vihaan looking at naked back pictures of girls Rehan is seeing.

This hurts Samaira and she ends up slapping Rehan in front of everyone.

A crying Samaira is spotted by Pratha and she hugs her immediately.

Samaira tells all about Rehan to Pratha as she gets consoled by Pratha.

Pratha advises her to not react as she will help Samaira dig deeper into Rehan’s activities outside the house.

Rehan eavesdrops on their conversation and meets Samaira in his room with a bad attitude.

He shows her explicit videos of him and other girls on purpose. Turning on the music loud, Rehan begins to abuse Samaira behind closed doors.

Meanwhile, Pratha decides to talk to Chanda as both Pratha and Mehak are running out of time to get the Kalash.

It is the same new moon night that occurred when Chanda lost her memory and Seema took over her family.

Pratha offers food to Chanda and gently asks her if she remembers anything from that new moon night.

Chanda shakes her head and stiffens. Seema appears and claps her hand at Pratha’s efforts.

Seema tells Pratha that Shesh Naagin is making her work easy. Pratha gets so angry at Seema’s hypocritical façade that she threatens to kill her today.

Pratha begins to transform into Shesh Naagin but Rishabh appears.

Seema calls his name to save herself from Pratha. Pratha breathes tensely as Rishabh wraps his arms around her.

This gives Seema an idea to call Rainaksh, an Icchadari Nevala, who is introduced to Chanda as her son.

Chanda refuses to believe that Rainaksh is her son but when he begins to call her Ma softly, Chanda cries happy tears.

Pratha realizes that Seema wants to get rid of Chanda as soon as possible and she stops Rainaksh as he begins to move out with Seema.

Pratha looks at Rishabh and proclaims that she has grown used to Chanda Ma’s presence and would like it if she stays longer.

Rishabh agrees while Rainaksh looks at Seema as if asking ‘what to do next?’.

As Rainaksh takes Chanda into her room, his arm gets brushed against Mehak’s hand.

The touch of his arm burns Mehak’s skin, leaving a palpable bruise.

Mehak suspects this mystery boy and warns Pratha to beware.

In the night, Pratha transforms herself into a snake to go into Chanda’s room through the backdoor.

However, Rainaksh greets her and lets her know he is here to stop her.

Both of them fight a duel that leaves bruises on Pratha’s skin. Pratha gets challenged by Rainaksh, as she makes a fist in anger.

According to the spoiler of Naagin season 6 on 8th May 2022, Pratha will discover that Seema belongs to the Kalkeya clan who are after the "Amrit Kalash" that has been kept guarded by the Naag Vansh.

So far in the story of Naagin 6, Pratha knows that Seema is not Rishabh's real mother.

Meanwhile, she is able to locate Rishabh's real mother, Chanda, and brings her to Gujral's house.

In the upcoming story of Naagin 6, in order to keep the "Amrit Kalash" safe, Pratha will encounter the biggest enemy of Naagins along the way; Icchadari Nevala.

A race of time will be fought between Pratha and Seema now to see who will get the Amrit Kalash first.

If Seema gets it, there will be large scale destruction of Bharat.

The viewers will have to wait with anticipation to see how Pratha will destroy Maha Asura Seema completely and also safeguard her clan's Amrit Kalash.

Let us see how Shesh Naagin Pratha performs toward this uphill task while also bearing the responsibility to keep Rishabh and Chanda safe.

To get to know more, download Naagin 6 all episodes or watch the online full episode of Nagin 6, go to the voot app.