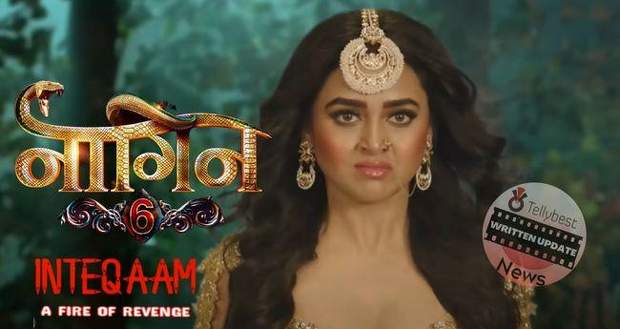 Today's Naagin 6 8th October 2022 episode starts with Prathna trying to wake Jeet up desperately but she screams in pain when Jeet does not wake up.

On the other hand, Pratha feels as if the thunderstorm occurring right now represents someone’s pain.

Pratha then firmly decides to change into Shesh Naagin so she can kill the “Asur”.

On one hand, Pratha is walking towards the pandal; on the other hand, Prathna prays to Matarani to give her powers so she can take revenge.

Meanwhile, Prathna transforms herself into Shesh Naagin and starts fighting the wild boar.

Looking at this Naagin, Pratha feels confused but decides to help regardless.

Once Prathna takes the Trishul, Pratha decides to run away from there as she does not want to reveal her Shesh Naagin identity to another Naagin.

Afterward, Prathna picks up the Trishul and kills the boar like a furious goddess.

Jeet to reveal the truth

After finishing the boar, Prathna returns to her real self and notices the police arriving to help hurt people there.

When Prathna goes to check on Jeet, Jeet weakly reveals to her that she is not his own daughter.

Further, he reveals that their country and Prathna are in danger and the terrorist has killed him because he has learned the truth.

Hearing this, crying Prathna urges Jeet to calm down but Jeet points towards Rudra before taking his last breath much to Prathna’s shock.

Meanwhile, Pratha wanders about other Naagin’s identity and about the attack.

She then decides to call the professor to know the answer (unaware that Jeet is Professor only).

Later while performing the last rite of Jeet, Prathna promises him that she will take revenge for his death.

She then notices a bracelet near Jeet’s dead body and figures out it must be of the killer.

When Prathna puts sets Jeet’s body on fire for the last time, she breaks down in tears and recalls her sweet memories with the professor.

Afterward, angry Prathna takes an oath to kill her dad’s killers before she lets go of her dad’s ashes in the water.

Prathna agrees to the marriage

Meanwhile, Manav arrives there out of nowhere and starts consoling Prathna.

He then asks Prathna to marry him the next evening.

At first, Prathna denies it but when Manav reminds her about Jeet’s last wish, she nods in agreement.

On the other hand, Rudra restlessly tries to call Prathna to know about her whereabouts, but she does not pick up.

Recalling Manav is there with Prathna, Rudra breathes a sigh of relief.

The next morning, Rishabh arrives at Rudra’s office to talk to him about the terrorist attack.

When Rishabh tells Rudra that he will help him to find the terrorists, Rudra gets excited as he knows now he will be able to track down attackers pretty easily.

Meanwhile, Prathna notices Rudra and Rishabh in the office and decides to find the original owner of the bracelet as she is still skeptical about Rudra’s involvement in Jeet’s murder.

When Rishabh informs Rudra that he has fixed the next Monday for his marriage with Anmol, Rudra agrees to it reluctantly.

On the other hand, Prathna notices Jeet in the CCTV footage and gets confused about Jeet’s arrival in the Rudra office last night.

Later, the receptionist gives Prathna the envelope to give to Rudra but Prathna opens it to read it.

While Prathna is reading it, Rudra arrives there and starts scolding her for not informing him beforehand about her leave.

Before Prathna can answer, Manav comes and informs Rudra about the professor’s death and his marriage to Prathna today.

Hearing about marriage, Rudra’s face falls but he expresses his condolence to Prathna.

When Rudra looks at Prathna, the bracelet falls from her hand and Rudra recognizes it.

Seeing this, Prathna confirms her doubt about Rudra being involved in Jeet’s murder.

At the same time, Manav gives Rudra an invitation to their marriage and urges him to come.

While Rudra nods, Anmol arrives there and announces that indeed they will come with their family.

Later outside, Prathna orders Manav to go away as she needs to take care of some staff.

Pratha agrees to do kanyadan

When Anmol arrives at the Guzral mansion, she requests Pratha and Rishabh to do Prathna’s Kanyadan as her father is dead.

Hearing this, Pratha tries to object but Anmol emotionally pleads with her to agree.

Thinking about Anmol’s happiness, Pratha along with Rishabh agrees to do it will make Anmol happy.

After Anmol walks away, Pratha thinks she will find the professor and also fulfill Anmol’s wishes.

The truth behind the terrorist attack

Meanwhile, Rudra calls Prathna to learn if she really wants to marry Manav in a sad voice, and angry Prathna nods by announcing that she needs to do this for her father.

When Prathna questions him if he will arrive in her marriage or not, Rudra nods and cuts the call with a heavy heart.

Later, in the evening, Rudra shows Rishabh the pictures of five dead bodies.

Looking through the pictures, Rishabh mentions that they all are wearing the same religious thread.

Hearing this, Rudra recalls the professor's words and tells them to Rishabh.

This makes Rishabh confuse and he questions Rudra about that person's identity but Rudra is unable to recall.

Rishabh then announces that they need to find the reason behind the terrorist interest in the ancient temple and Rudra agrees to it.

On the other hand, the chief explains to his mates how they have manipulated the authorities to think the country is in danger, but their real motive is to capture the ancient lord Vishnu temple.

Meanwhile, in Manav's home, Anmol drags Pratha to Prathna's room to help her get ready for marriage.

Before Pratha can see Prathna's face, she gets a call and walks away.

When Anmol questions Prathna if she wants any help with makeup, Prathna denies her firmly and orders Anmol to leave.

After Anmol walks away, Prathna transforms herself into Shesh Naagin and leaves the wedding.

While Rudra and Rishabh are busy discussing the attacks, they feel the building shaking and think it must be an earthquake.

Meanwhile, Prthna is the one who is attacking the building with her long Shesh Naagin tail continuously.

Recalling Jeet's face, Prathna's eyes fill with rage and she yells that today she will kill everyone.

On the other hand, Pratha feels as if Rishabh is in any problem as her manga sutra is giving her itching.

In the upcoming story of Naagin 6 on 8th October 2022, Prathna's father, Jeet or infamously known as the Professor, will die at Unnati grounds after being injected by a stranger.

He dies with Rudra's bracelet in his hand which Prathna notices at the time of Jeet's cremation.

So far in the story of Nagin 6, the chief releases a wild boar to kill Shesh Naagin as his revenge that couldn't take place 21 years ago.

However, the Professor gets to know this and sacrifices his life to save both his daughters against the wild boar, Anmol & Prathna.

As per the latest spoilers of Naagin 6, Prathna swears to kill the person who killed Jeet. When she goes to work at the office, Rudra informs Prathna that the bracelet she is wearing belongs to him.

Further, as per the latest gossip of Naagin 6, Rishabh's reflection appears in Prathna's eyes and she thinks of him as Jeet's killer.

Will Prathna ever realize that Rishabh is her biological father & Jeet was only her foster father?

Let us see how this time, the tale of Naagin 6, transports the viewers into the land of mystery, supernatural, and confusing family relationships in future episodes of Naagin 6.

© Copyright tellybest.com, 2022, 2023. All Rights Reserved. Unauthorized use and/or duplication of any material from tellybest.com without written permission is strictly prohibited.
Cached Saved on: Monday 21st of November 2022 07:23:43 AMCached Disp on: Wednesday 7th of December 2022 03:59:54 PM