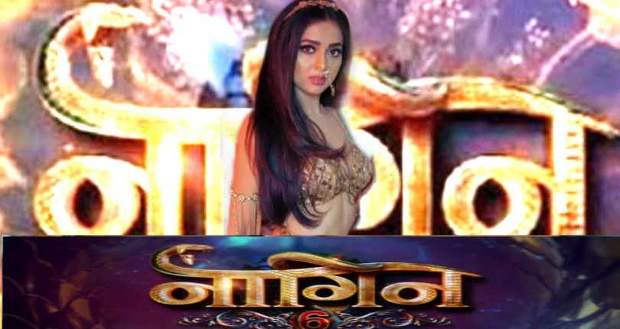 Today's Naagin 6 9th April 2022 episode starts with Pratha and Rishabh looking at each other intensely.

Reem has instructed Rishabh to let go of Pratha if her past comes out clean but this is not Rishabh’s will.

Rishabh tells Pratha that she is free to move on and walk out of the Gujral House.

When Pratha asks the reason behind Rishabh’s spoken statement, Rishabh looks down as if he has no concrete answer.

Downstairs, everyone is dancing to the upbeat tunes in celebration of Rihaan’s and Samaira’s engagement.

Reem grabs a hold of Rishabh’s hand and dances with him.

Pratha’s eyes soften as she watches the duo dance and brushes herself aside from the center of attention.

Mehak joins Pratha and asks Pratha what is her next plan regarding Rihaan.

Gujral Family Goes For a Hunt

Just then, Rihaan makes a plan to go out for a hunt in the jungle.

Everyone prepares to leave for the jungle and be back by breakfast time.

When it is time to go, Pratha sits in Yash’s car instead of sitting with Rishabh.

This confuses Yash and he asks Reem about Pratha and Rishabh’s relationship.

Reem tells Yash that they are not happy with each other as Rishabh loves Reem, not Pratha.

When Yash asks the reason why Rishabh married Pratha instead of Reem, Reem shrugs off the argument casually.

She tells Yash that Reem and Rishabh had a fallout.

Hence, to prove a point to Reem, Rishabh married Pratha instead.

During the drive to the jungle, Rishabh keeps staring at Pratha’s face through the rearview mirror.

Pratha is aware of Rishabh’s gaze.

At the same time, Pratha’s being is burning to punish Rihaan as he killed Riya.

Amidst the ride, Yash tells everyone that he has heard there are a lot of snakes in the jungle.

Making use of this opportunity, Pratha mentions Riya in the conversation and brings up the topic of her death.

The mention of Riya’s name makes Rihaan’s hand tremble around the steering wheel.

Pratha further adds in the conversation that there are “Icchadari Naagin’s” still alive too.

With her incredible powers, Pratha makes the tire of the car punctured. Rihaan gets shocked by the sudden puncturing of the tire.

However, everyone leaves in groups, making sure no one gets left behind.

Reem & Rishabh Meet Up With The Detective

On the other hand, Rishabh and Reem meet the private detective who confirms Pratha’s past.

The private detective confirms that whatever Pratha has told Rishabh about her past is completely true.

When the meeting ends, Reem holds Rishabh’s hand and looks into his eyes with heated desperation.

She urges Rishabh to let go of Pratha and be with her instead.

Meanwhile, as Rihaan gets closer to Samaira behind a tree, a roaring Tiger shows up.

Pratha arrives on the spot and transforms into her Naagin avatar after Rihaan tells Samaira to leave.

Rihaan holds a gun pointing at the Tiger. He does not have much time to think when Pratha knocks his balance off and he falls.

The Tiger is left unharmed by Pratha as she invokes concentrated power near her naval from Lord Shiva himself.

Pratha then turns her attention toward Rihaan and asks him about Riya.

She tells Rihaan that his death is sure by her hands.

Rihaan begs for mercy but he is nothing but ash in front of Pratha’s anger.

Pratha hangs Rihaan’s body over burning woods, with a satisfied smile on her face.

The next morning, Reem, Rishabh, and everyone else arrive by the time breakfast is readied.

Reem tells Urvashi that she is all set to be with Rishabh.

The private detective was bribed by Reem herself so Rishabh can let Pratha go from his life.

When Rishabh asks Seema about Pratha, Seema mentions she came early with Yash as she was not feeling well.

Reem urges Rishabh to go talk to Pratha and make a scene so she finds it easy to leave him.

When he walks into his room, he finds Pratha packing bags.

Pratha and Rishabh have a face-off where both of them want to be closer yet something tears them apart from confessing.

Rishabh thinks that Pratha is leaving.

But Pratha has a surprise for both Reem and Rishabh.

When Seema asks Pratha where she is leaving with her suitcases, Pratha hurls the bags on the floor in front of everyone.

A bottle of shampoo peaks out and it turns out to be Reem’s.

Pratha yells at Reem to leave Gujral House as soon as possible.

Urvashi tries to raise her hand at Pratha but Pratha grabs a hold of hers.

Reem is thrown out Of The House by Pratha

Pratha is fiery and she delivers instances in front of Seema when Reem tried to mix something in Rishabh’s drink to get closer to him.

As a woman married to Rishabh, Pratha publicly declares that Rishabh can only be Pratha’s.

Rishabh runs after Reem but it is too late. Reem is hurt and she leaves along with Urvashi.

Rihaan returns with Samaira at the breakfast table.

Mahek gets surprised and looks at Pratha for an explanation.

Pratha informs Mahek that as soon as she was about to kill Rihaan, his phone rang.

The speaker on the line mentioned Chingistan’s Naagin.

Pratha tells Mahek that it is only through Rihaan that they can reach the fifth Asura.

Pratha asks Mahek not to worry as Rihaan has been enchanted and won’t remember what happened with him.

Rishabh returns and puts Pratha on his shoulder, taking her outside.

He yells at Pratha and asks why she created a scene and threw Reem out of the house.

Pratha’s eyes tear up as she tells Rishabh how her dreams were shattered as a little girl.

Rishabh asks Pratha whether she loves him or not to which Pratha says yes.

Rishabh’s heart skips a beat when Pratha tells how her journey has been so emotional and sanctified ever since Rishabh came into her life.

But after a split second, Pratha bursts out into laughter, confusing Rishabh.

Pratha tells Rishabh that she is with Rishabh only for money.

If he wishes to divorce Pratha, he can but he will have to give huge sums of alimony then.

Rishabh storms off but deep inside only Pratha knows that whatever she said before laughing was utterly true.

She loves Rishabh deeply but she is not allowed to; only if Rishabh knew his wife is the “Shesh Naagin”.

As per the latest promo released for Naagin Season 6, today's 9th April 2022 episode is about love blossoming between the said rivals Pratha and Rishabh unknown to the fact that both are headed for the same goal.

In the latest episode of Nagin 6, we witnessed that Rishabh is in search to find out Pratha's secret, while Pratha is tied between her roles as Naagin and a wife.

Along with an inexplicable need to find out Pratha's intentions, Rishabh also feels the need of being closer to Pratha.

In the upcoming episode of Naagin 6, Pratha will be attacked by an unknown opponent while she is in a forest.

A fierce battle will be seen between Tiger and the Sravashreshth Shesh Naagin Pratha.

In the story ahead of Naagin 6, Rihaan and Samaira are already in the jungle while Vihaan will try to hunt the Tiger down.

Who is the enemy in the guise of Tiger?

The Shangri-la chapter is already over. Yash is the new entry.

Could Yash be someone from the Asura clan?

A lot of twists and turns are awaiting to be disclosed in the future story episodes of Naagin 6.

Let us see how Pratha fights the Tiger and how the battle between a snake and a tiger turns out.

To get to know more, download Naagin 6 all episodes or watch online today's (9 April 2022) latest full episode, go to Voot.com.