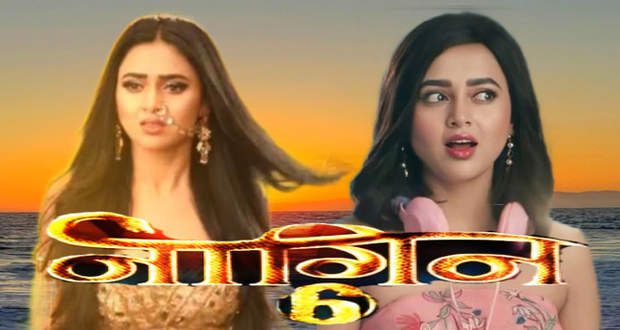 The words delight Mehek and Urvashi a lot as their way of conquering the land becomes easy.

Rajesh asks Rishabh for their permission to get Divya and Rehan married as soon as possible to which Mehek replies positively and Rishabh affirms too.

Urvashi invites Rajesh Pratap Singh to come and stay at the Gujral house along with Divya and Kiara till the wedding.

Rajesh accepts Urvashi’s request while Kiara suggests that why not get Rehan and Divya engaged the next day.

While Rehan sleeps in his room, Pratha disguised as Samaira goes to his room and terrifies him to his core as Samaira’s ghost.

Rehan runs out of his room to the terrace where he meets Riya (disguised Pratha) and accuses her of playing with him. He tries to run away again but Pratha again takes the form of Samaira.

In utter shock and pure terror, Rehan runs out of the house where he meets Kiara who sends her back to the house.

Back in the house, Rehan goes to Divya’s room and starts flirting with her but gets a tremendous shock when sees Samaira’s ghost in place of Divya.

As Rehan runs away from there as well, Pratha and Divya relish in his pathetic state.

Pratha walks down the staircase in the middle of the night as she reminisces her old days spent in the house.

Pratha crawls upstairs to Mehek and Rishabh’s room and Mehek wakes up with the intensity Pratha stares to the other side of the door.

Mehek finds no one when she opens the door while Pratha goes down the corridor. She reaches Shakti’s room and proceeds towards it.

However, Mehek also reaches there and stops Pratha from anywhere near the door.

Mehek prods Kiara to come outside for the walk. Kiara agrees in order to get the secret of the room out of Mehek.

Deliberately, Kiara brings up the topic of Mehek’s sister who is a look-alike of Kiara.

As Kiara talks about Pratha nonchalantly, Mehek gets aggravated and confronts Kiara about being Pratha.

When Kiara acts to not understand, Mehek takes over her Naagin form and captures Kiara challenging her to come in her real form.

Seeing her end near, Mehek gets terrified and Kiara shakes her out of her hallucination.

Mehek still feeling the after-effects of the shock of her hallucination tries to fathom what just happened while Kiara asks if Mehek has seen some dream with open eyes.

Mehek dismisses it and asks Kiara about the land.

The next day, Pratha goes near Shakti’s room again and wonders how she missed this corridor while she used to live there in the house.

Pratha hears some noises coming from inside that are made by Shakti.

Somehow getting her hands on the key to the room, Pratha opens it and goes inside.

From inside the room looked like an abandoned store room. Pratha roams around to find something or anything that can lead her.

Meanwhile, Shakti who is hiding above on the shelves gets his eyes on Pratha and recognizes her as Rishabh’s love interest whom he betrayed with Mehek.

Allured by Pratha’s beauty and her being Rishabh’s love, Shakti drools over Pratha and decides to have sex with her instead of Mehek.

Rishabh is drawn toward Kiara

Pratha leaves the room after some time, not finding anything. Outside the room, she collides with Rishabh and falls down.

Rishabh offers his hand to Kiara and pulls her up back on her feet. The whole while his eyes did not leave Kiara’s.

Rishabh asks Kiara the reason for being near the room. Kiara smoothly lies that she lost her way and further questions him about what’s inside the room.

Rishabh says he doesn’t know and asks her to stay away from the room.

As the two begin to their separate ways, Kiara gets pulled into Rishabh’s chest all of a sudden, her bracelet being stuck in his shirt.

Rishabh holds Kiara by her waist close to him as both of them stare into each other's eyes while the love shimmer in their eyes.

The preparations for the engagement party are taking place while the girls dress up Divya for the occasion.

Divya feels doubtful of her attire due to which Kiara calls Rehan to give his opinion.

Rehan compliments Divya while Vihaan enters the room at the same time and suggests Divya wear another dress to which she agrees.

Rehan gets annoyed and leaves the room. Vihaan goes behind him and asks him to help him with the money.

The two break into a fight due to Rehan’s jealousy while Mehek comes there right at the moment and stops them.

Mehek asks Rehan to not back out from the wedding as Divya is a treasure for them while mollifying Vihaan saying she has another plan for him.

Pratha watches them from the distance and decides that she will avenge her revenge today.

In the upcoming story of the serial Naagin 6 on 9th July 2022, Pratha (disguised as Kiara) will be coming across the hidden truth of Rishabh’s twin brother, Shakti.

So far in the story of Naagin Season 6 on 9 July 2022, Kiara is enjoying her time by fooling the Gujral family.

However, Urvashi and Mehek have their eyes set on Kiara, as they doubt her identity.

As per the latest spoilers of Nagin 6, Kiara reaches outside the chained room in which Mehek has hidden Shakti.

Being curious to know what lies behind the closed doors, Kiara goes to open it but gets stopped by Mehek.

Mehek’s all doubts will get resolved regarding Kiara’s identity and the two Naagin sisters are going to be seen fighting each other in the future episodes of Naagin 6.

Let’s watch if Rishabh’s innocence in killing Pratha’s child gets proved with Pratha knowing the truth about Shakti or will Urvashi somehow succeeds in refraining from the entire truth unfolding.