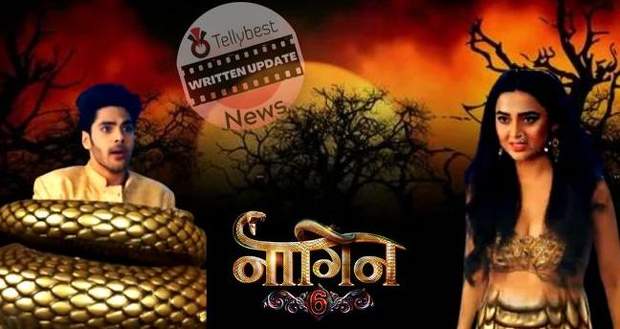 However, noticing common people coming out of the office, Prathna calms down and decides to kill Rudra and Rishabh separately because she does not want to harm common people for her revenge.

After Prathna walks away, the building stops shaking, and Rishabh tells Rudra that he thinks a conspiracy is going on under their nose.

Prathna gets into a dilemma

Feeling defeated, Prathna comes back home and decides to cancel the marriage since her revenge is pending.

On the other hand, Rishabh orders Rudra not to inform Pratha and Anmol about this attack to avoid giving them tension.

Meanwhile, Anmol enters Prathna’s room to help her get ready for the marriage.

Anmol then informs Prathna that she feels connected to her on a deep level so she has come with her family to give Prathna some company during her marriage.

Hearing this, Prathna gets into a dilemma as she wants to kill Anmol’s father and fiancé.

However, when Anmol tells Prathna that she has asked her parents to do her kanyadan, she declines it and announces that she wants her late father to do kanyadan.

While Pratha is thinking about the professor, Anmol is looking everywhere for Jeet’s picture.

Later while Anmol is taking Jeet’s picture to Prathna’s room, she collides with someone and the picture falls from her hand with rose panels on its top.

After catching the picture, Pratha gets shocked to see Jeet’s picture.

When she asks Anmol about it, Anmol reveals that he is the father of Prathna much to Pratha’s shock.

Realizing Prathna is her real daughter, Pratha runs towards Prathna’s room to talk to her.

As soon as she opens the door, she and Prathna stare at each other in complete silence.

Seeing Prathna, Pratha feels motherly affection, and her eyes are filled with tears.

Before Pratha says anything, Anmol enters the room and cheerfully tells Pratha must have looked gorgeous at her wedding as Prathna.

Afterward, Pratha along with Anmol takes Prathna to the mandap.

Looking at Prathna, Rishabh gets stunned and questions Pratha about it.

However, Pratha lies to Rishabh that it is possible someone can look exactly like her.

Meanwhile, Rudra feels as if his heart is getting shattered seeing Prathna and Manav doing wedding rituals.

On the other hand, Prathna thinks even though Rishabh and Pratha are her real parents she will not forget her revenge.

In the meantime, Pratha decides to meet Suhasini to clear her doubts about Prathna and Anmol.

Later, when Pratha confronts Suhasini about her daughter, Suhasini manipulates her by saying that Jeet has some kind of grudge against Pratha so he replaced her daughter with his.

Unable to believe it, Pratha screams that now she cannot accept Prathna as her daughter without breaking Anmol’s heart.

With a cunning smile, Suhasini fakes her tears and announces that she only gave the daughter that the professor ordered her to give.

On the other hand, Prathna pretends to get dizzy when the pandit orders her to get up for pheras.

Before Prathna can fall, worried Rudra catches her in his arms like a hero and helps her to lie down in the room.

As soon as Rudra leaves, Prathna opens her eyes and walks away from her room.

Switching off the lights, Prathna transforms herself into Shesh Naagin and searches for Rishabh to kill.

While Rishabh is roaming the streets and thinking about the ancient temple, Prathna attacks him from behind.

Before Rishabh can understand, he falls to the ground.

However, Prathna again notices some people there and feeling frustrated runs away as she cannot harm other people.

When Anmol along with Rudra arrives there to help Rishabh, he tells them that an unknown creature attacked him.

Meanwhile, during driving, Pratha's mind keeps wandering back to Prathna and Anmol.

On the other hand, Prathna overhears Manav telling someone on call that he will give Prathna to that person tonight so he better keeps the money ready.

When he turns around, Prathna grabs his collar and orders him to reveal what he wants to do with her.

However, Manav hits Prathna on the head with a bottle and Prathna falls unconscious.

He then puts a net on Prathna with a smirk so it gets easy for him to carry her.

Elsewhere in the hall, Anmol asks Rudra joyfully how she is looking and Rudra gives her a compliment with a grim expression.

After Anmol leaves, Rudra's friend urges him to explain what kind of lehnga Prathna is wearing and Rudra gives him a detailed explanation but when Rudra's friend asks him about Anmol's lehenga, he blanks out.

Noticing this, Rudra's friend teases him about it, and at the same time, Manav arrives on the stares and announces he cannot marry an orphan.

Hearing this, Rudra tries to change Manav's mind but Manav ignores him.

Seeing this, angry Rudra gets into a fight with Manav but Anmol drags him away.

After Manav leaves, upset Anmol calls Pratha and urges her to come so she can break the news to Prathna.

Later, on a lonely street, Manav opens the backside of his car and changes into Prathna.

Looking at unconscious Manav, Prathna recalls how she overpowered him by transforming into Shesh Naagin and kidnapped him instead.

After transforming into Shesh Naagin, Prathna picks Manav up in her tail and orders him to reveal the name of the person otherwise she will kill him.

Hearing this, Manav begs for his life and announces that he does not know anything but Prathna by mistake throws him.

Manav gets stuck in an electric poll and dies.

Seeing this, Prathna gets worried as she will not know the name of the mysterious person.

In the upcoming story of Naagin 6 on 9th October 2022, Pratha will meet Prathna in her room.

So far in the episodes of Naagin 6, Prathna has gone to attack Rudra’s office to kill Rudra and Rishabh.

According to the spoiler, a person will drop Jeet’s photo while carrying the red roses and Pratha will catch it.

Looking at Jeet’s picture, Pratha will figure out Prathna is her daughter and will run to meet her.

Now as per the twist of Naagin 6, Pratha and Prathna both will get shocked after meeting each other.

Let’s see the emotional reunion between Pratha and Prathna in future episodes of Naagin 6.

© Copyright tellybest.com, 2022, 2023. All Rights Reserved. Unauthorized use and/or duplication of any material from tellybest.com without written permission is strictly prohibited.
Cached Saved on: Monday 21st of November 2022 01:35:30 AMCached Disp on: Wednesday 7th of December 2022 04:35:08 PM