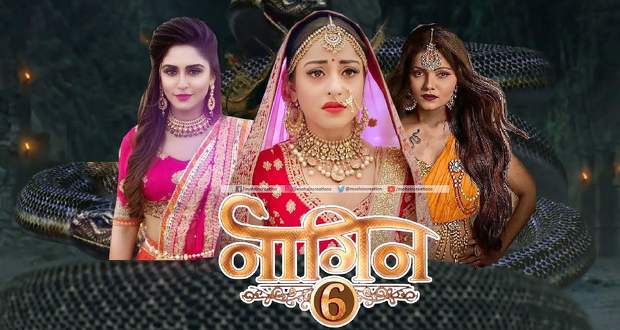 The last episode of Naagin 6 started with Rehan finding Priya’s bracelet around Soumya’s neck and blames her for killing her.

However, Pam is the real killer and she is the one to frame Priya by leaving her bracelet around Soumya.

Pam forces Priya to leave the house by showing fake emotions while heads towards Mussoorie.

Pam also hypnotizes Rehan using her magic and comes downstairs with him.

Pam reveals herself and also tells Shashank that she had planned on becoming the deadliest demon.

Priya starts crying on her way and her vision gets blurry. She gets confused about the items around her and returns home.

She finds Mini and Shashank lying on the floor.

She learns that Pam is the devil and has kidnapped Rehan. She also remembers Rageshwari’s last words and decides to go to Kamal Bawdi.

She reaches there and finds Rehan influenced by Pam’s black magic. She also has planned to absorb all of Rehan’s powers once the new moon’s light falls on him.

Priya tries to save Rehan but he losses all his powers. Pam is about to leave the Bawadi when Priya remembers about the lotus and decides to help Rehna.

Aru asks Priya to not let Pam leave the Kamal Bawadi or else she will get more powerful.

Rehan still has got Adi Jheel powers as he is the son of a Nagin and an Eagle.

Priya and Rehan team up to fight against Pam to beat her. They both kill Pam and Rehan gets his powers back.

Rehan feels sorry for misunderstanding Priya while she forgives him. She confesses her love while Rehan also tells her how much he loves her.

They hug each other while the family reunites to celebrate the occasion.