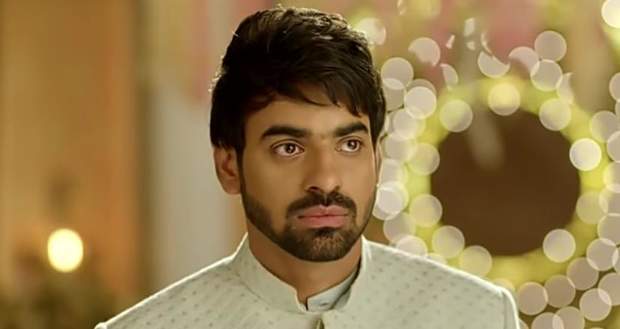 She leaves in the car for the wedding while Ronak calls her and tells her that the driver is waiting for her.

She gets confused and says that she is already in the car while suddenly Yug snatches the phone from the driver seat.

He tells her that she has been kidnapped while she remembers Ronit's threat of sending Lucky to jail.

She distracts Yug and the car gets hit on a tree while Kahani runs away.

Elsewhere, Ronak goes to Kahani's house to look for her but Rani tells him that she left in the car he had sent for her and starts crying.

Kahani manages to get a phone from someone and calls Ronak but the phone's battery dies.

She is running while she gets surrounded by black car's and Yug emerges from one of them and kidnaps her again.

He puts her in a secret hideout and tells her that she is not the Kahani that he knew.

Kahani replies that she is the Kahani that is greedy of money and is marrying Ronak for money.

Yig locks her in the house and leaves.

Elsewhere, Irawati sets a trap for the person who is threatening her as Gunjan comes there hiding her identity to get the evidence.

Suddenly, Chotu comes out from hiding and traps her and Irawati demands her to reveal their identity.

Later, Yug comes to his room where Ronak demands to know where is Kahani.

Yug ignores his question and offers him coffee but he flings the coffee to the side and is about to Yug when Saroj comes there.

She berates him while Yug says that he was the one who told him to hit him for what happens the previous day.

Elsewhere, Irawati is about to reveal the face when Gunjan manages to free herself from Chotu and points a gun at her.

She snatches the phone and runs away while Irawati notices the attackers long hair and figures out that it is a girl.

She sends Chotu to catch the girl.

© Copyright tellybest.com, 2020, 2021. All Rights Reserved. Unauthorized use and/or duplication of any material from tellybest.com without written permission is strictly prohibited.
Cached Saved on: Saturday 16th of January 2021 01:55:00 AM