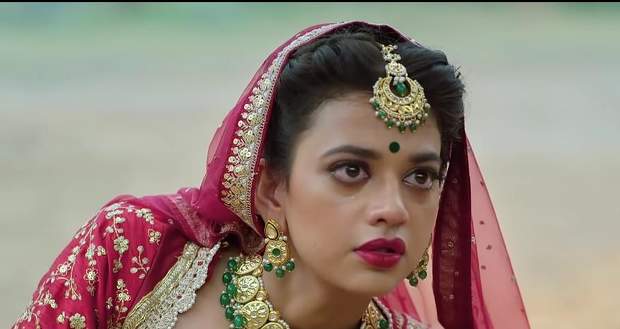 Elsewhere, Kahani gets a nightmare about the police poisoning Lucky and thinks that she will have to escape anyhow.

She manages to free herself from the ropes and opens a window.

Ronak takes out the tracking device from Yug's car and tells the goons to search in the jungle for him.

Yug goes to the secret place to give Kahani food but gets confused seeing the window open.

Out of nowhere, Kahani hits him with a tube light in the head and he falls getting dizzy.

She apologises to him and takes out the keys from his pocket when Yug grabs her wrist to stop her from going.

Yig manages to grab her leg and makes her fall while trying to get the keys from her.

Meanwhile, Irawati tells Ravikant that she has a gift for him and brings out a box while he gets scared of seeing it.

She tells him that both she and her powers are evil while she takes out the deck of playing cards from the box.

She says that the girl has to die while Ravikant gets scared for Gunjan.

Meanwhile, Kahani hits a glass bottle on Yug's head and he falls unconscious while she opens the door and escapes.

A lamp falls which erupts fire around the house while Kahani goes inside to save Yug.

At the same time, Irawati makes a circle with cards and does black magic on a black toy car.

Elsewhere, Gunjan suddenly stops in the middle of the car and is unable to move while a black car speeds towards her.

The car is about to hit Gunjan but Dolly saves her while the phone gets crushed under the car.

Elsewhere, Kahani gets Yug out of the house and puts him under a tree.

He suddenly puts handcuff around her hand and another in his hand while throwing away the key.