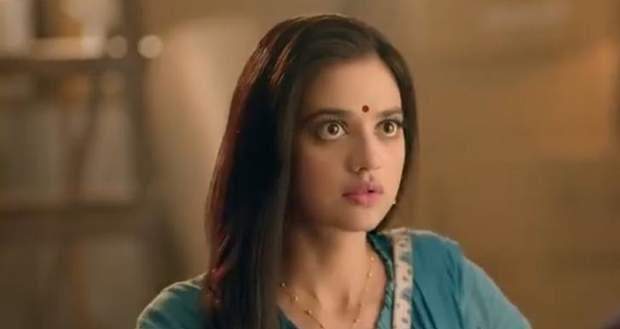 Today's Namak Ishq Ka 14 January 2021 episode starts with Yug throwing away the key and fainting while Kahani tries to break the handcuffs by a stone.

Ronak comes there and sees that they are handcuffed and tells the goons to search for the key.

He finds the key and goes to the place where Kahani and Yug were but gets shocked seeing them not there.

He shouts for her while Yug puts his hand on Kahani's mouth to prevent her from screaming.

Kahani gives Yug leaves and tells him to eat to heal his wounds and he falls unconscious after eating them.

Kahani tries to pull her hand from the handcuff when Ronak shows her the key and tells her to free herself.

Suddenly, Kahani starts slapping him and while Ronak gets confused.

She tells him that she had to hurt and lie to Yug because of him while he gets suspicious and asks her if she loves Yug.

Ronak tells her that he will never accept her and will never bring her into his house while she remembers Yug's insults hurled towards her.

Kahani's Chunri gets stuck in Yug's hand and she tries to free it while he subconsciously tells her that her words do not match the emotions portrayed in her eyes.

Elsewhere, the doctor checks Irawati and says that her blood pressure and nerves are low and gives her injection while Gunjan and Dolly come there.

Saroj questions Gunjan about the injury on her hand while Dolly recalls the whole incident.

Meanwhile, Kahani questions Ronak why they are at the hospital while he tells her that they will go abroad.

He goes to attend a call while Yug comes in front of Kahani which shocks her.

She tells him that he can't do anything as there are police officers around them while he tells her that she should never talk about self-respect, dignity and respect as they do not suit her.

He leaves while police came to Kahani.

Elsewhere, Gunjan apologises to Ravikant and tells him that she will have to stay low for a while as Irawati might get suspicious of her.