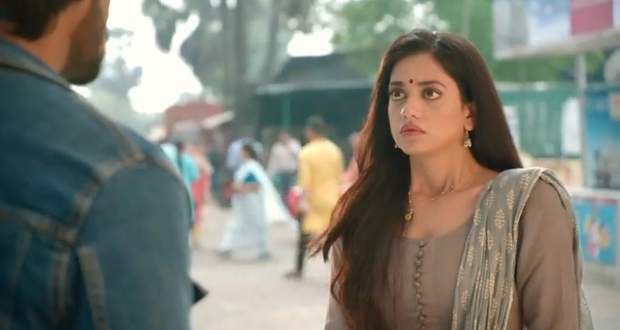 Chamcham gets in front of Yug's car while picking up the remaining money and the two meet.

Meanwhile, Irawati burns the pictures and threatens Ravikant with killing him.

Yug taunts Chamcham which sparks a fight between the two and he leaves.

Irawati pushes Ravikant from the stairs then faking it shows concern for him.

Lucky and Rani tell Chamcham that they feel scared and she gives them the key Yug gave her when they were kids.

Irawati calls Yug and informs him of Ravikant's fall which makes him feel worried and he rushes home.

The doctor tells Chamcham to stay the night for keeping care of the patient.

Chamcham and Juhi go to the kitchen while Sattu hides from them.

Juhi tells her the whole story of the family and it is revealed that Sattu's name is Ronak and Sweety's name is Roopa.

Yug sees that Ravikant refuses to drink the soup and he sings for him.

Chamcham cries hearing the song and gets confused feeling related to the song.

© Copyright tellybest.com, 2020, 2021. All Rights Reserved. Unauthorized use and/or duplication of any material from tellybest.com without written permission is strictly prohibited.
Cached Saved on: Saturday 31st of July 2021 06:55:49 AMCached Disp on: Sunday 1st of August 2021 05:32:03 AM