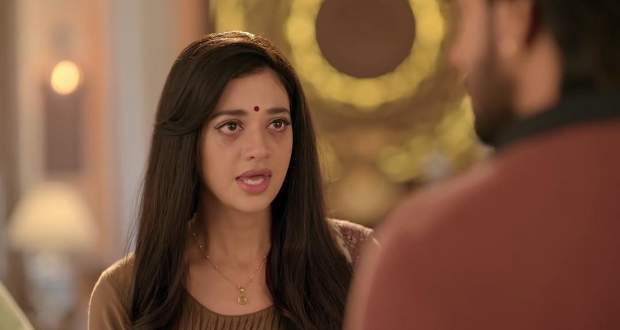 Today's Namak Ishq Ka 21 December 2020 episode starts with Chamcham telling Varma's family about her reason to hide the fact that she is an item dancer and apologizes to them.

She further warns Yug to never speak ill about her talent for dancing and leave the house.

While on the road, Chamcham throws the gift Yug gave her but goes to pick it up when she remembers his kindness towards Ravikant.

However, she sees that a dog has it in his mouth and struggles to take it from him and Ronit comes there.

Irawati tells Yug's mother that she did wrong when she took to stand for Chamcham and manipulates her into thinking that Chamcham is a bad person.

Meanwhile, Ronit gives Chamcham tea and tells her that he feels sorry that no one sees her real personality and judge her on her work.

Ronit sees Yug coming towards Chamcham as she is leaving and stops him.

Later, Roopa is praying to Lord Shiva while Gunjan passes her and accidentally kicks the lightened lamp into her Saree.

Yug sees the Saree and puts out the flame.

Suddenly, Irawati slaps Gunjan and drags her to the front door, and tells her to leave the place.

Gunjan tells her that she is blaming her for the incident which caused Roopa's scar.

Roopa feels her and goes away.

Yug and Gunjan apologize to her while Ronit hears them from outside the door.

Ronit calls Chamcham and finds out from their talk that she loves her siblings more than anything.